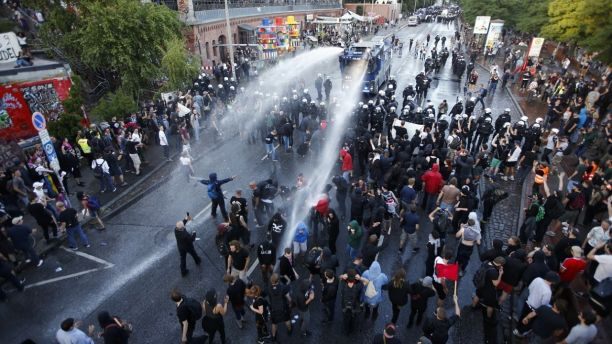 By Maurus Adam on the Mises Wire

Riots against police have not only occurred in the US. Two events have spurred a public debate in Germany recently. On the night of June 20, police officers in Stuttgart stopped a 17-year-old to check for drugs in an area popular with young partygoers. Two to three hundred people in the crowd of bystanders sympathized with the young man and attacked the police. The situation escalated into riots and lootings. Forty stores were damaged, 9 looted, and 32 police officers were injured. The damage is estimated at between six and seven figures. Police believe that as many as five hundred people participated in the riots. Twenty-five arrests were made the same night; 12 of the arrested were German citizens and 3 of them had an immigrant background. The rest were citizens of other EU and non-EU countries. On the night of July 18, police officers in Frankfurt were attacked in front of the opera. Five police officers were injured, several vehicles damaged. Witnesses reported that the crowd of five to eight hundred people cheered when bottles hit the police. Thirty-nine people were arrested. All but one woman were young men between the ages of 17 and 23; most of them had an immigration background.

These events seem small compared to the riots in the USA, but there are important similarities: young people united against the police after several months of covid-19 restrictions. The events in Stuttgart and Frankfurt were found to be spontaneous outbreaks of violence without a political motivation. This is despite the fact that there have been Black Lives Matter demonstrations in Germany as well against alleged racism in the police, which were followed by riots in the US. These demonstrations may just have served as a catalyst for built-up anger. The root cause of this violence is the government’s massive interference in personal liberties through drug prohibition and the lockdowns.

The Drug War and Racism

Twelve percent of German residents are non-Germans. In 2018, the latest year of available official statistics, 27 percent of the suspects in drug offenses (all nonviolent) were non-Germans. Non-Germans do not have German citizenship. Suspects with German citizenship and an immigration background are treated as Germans. There are no numbers on this group, and there are no numbers on police checks on the street. There is, however, a general sentiment that police target people perceived as foreigners more than “ethnic” Germans, that they check people with an immigrant background more than those without one. This has caused skeptical to downright hostile sentiment against the police, not only in this group but among their peers.

The above statistics need to be read with care. The Bundeskriminalamt (equivalent to the FBI) reports on suspects, not convicted offenders, here. There is also no data on spontaneous checks. But there is one very important aspect to this data: 11 percent of the suspects were boys between 14 and 18 years old, 16 percent were young men between 18 and 21, and 61 percent were men above 21. There is no data on the older age groups, but it is clear that overwhelming majority of suspects are male, and most probably of a younger age.

The Effects of the Lockdown

People in Germany have seen massive restrictions of their personal freedom unseen in West Germany since the end of World War II. Businesses were closed, factories shut down, and meeting people outside your household was banned for a while and limited later. How could the government enforce such drastic measures? Etienne de la Boetie (The Politics of Obedience: The Discourse of Voluntary Servitude) has argued that all governments rest on the consent of their citizens. In this case, the government has bought this consent by promising to save lives and save the economy with huge spending financed by public debt so that no one will have to pay more taxes. A key group of supporters of the government is public employees. In September 2019, before covid-19, 45.28 million people in Germany were employed. The state (all levels) employed 4.8 million, or 10.6 percent. In addition to that, there were around 18 million retirees (18.2 million in 2017). They also receive their income from the state. This means that there is a very large group of people whose financial well-being was not sacrificed during the lockdowns. But who did not get this payoff? According to the union of public employees, only 2.7 percent of public employees are under the age of 25.

Young people did not get these massive handouts from the state. On the contrary, they are the ones who will have to pay back the €156 billion public debt that the state has taken on to provide “relief.” Their schools and universities have been closed, lectures are mainly online now, which can decrease the quality of teaching. Beyond that, they are the ones who will then have to pay the pensions of the older generation that did receive the handouts. In Germany, the currently employed pay the pensions of the retired. Demographic development will increase the amount that the employed generation has to pay. Right now there are 2.1 employed people for every person who is retired. The younger generation faces economic distress right now and in the future.

This situation is aggravated by banning social contact and closing places where younger people meet with their peers. Third places outside the home and the workplace are essential for communicating values and boundaries. For several months, there have been no outlets for the prevention violence in young men through boxing gyms, etc. They were locked up for weeks, which leads to aggression and is especially bad for young men who would naturally be rebellious. If testosterone-laden boys cannot meet with their friends (and, probably more important, their girlfriends), cannot release energy at the gym, and are not receiving any value-oriented education, there are solid conditions for escalating violence.

The violence against the police is an outbreak of anger against the state, a state that has continuously interfered with their personal liberty and property. A group of mayors from the green party, the Social Democrats, and the Christian conservatives in an open letter appealed to the government to support a policy in which all young people in Germany would be forced to work for one year in what they called “basic social service” (gesellschaftlicher Grunddienst), similar to the mandatory “social year” we had before. Some media commentators enthusiastically embraced this idea. This is the wrong way forward. One really wonders about the sensibility of these politicians, who write in the same letter:

Young people do not learn respect, acceptance, tolerance on Wikipedia, Facebook, and Instagram, but in the interaction with others. At the place of apprenticeship. In the [sports] club. During everyday life. Here one practices the discourse and contact with others….These social training places are becoming less and less.

The way forward is not in complaining about such social places becoming less, because that is not the problem. The way forward is to stop threatening further restrictions, to stop advocating “a new normal” without social interaction, and to stop harassing young people for every decision they want to make for themselves. The federal police already implicitly recognizes drug offenses as victimless crimes (it collects statistics only on offenders, not victims, in contrast to their data for violent crimes). They should stop treating them as crimes outright. After all, 60 percent of the drug offenses are related to cannabis alone. Leave the young people alone. Let them make friends. Let them learn. End the government intrusion in their lives.