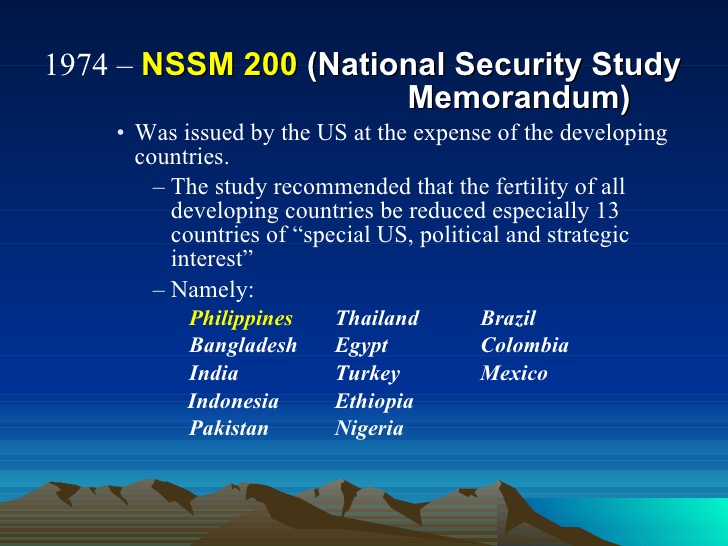 Population Control Law is actually Agenda 21 which is a British policy to reduce the population of former colonies like India through various sterilization projects and other policies implemented through the United Nations and popularised by Hollywood to effectively keep nations under Anglo-American orbit.

On Dec. 10, 1974, the U.S. National Security Council under Henry Kissinger completed a classified 200-page study, “National Security Study Memorandum 200: Implications of Worldwide Population Growth for U.S. Security and Overseas Interests.” The study falsely claimed that population growth in the so-called Lesser Developed Countries (LDCs) like India was a grave threat to U.S. national security. Adopted as official policy in November 1975 by President Gerald Ford, NSSM 200 outlined a covert plan to reduce population growth in those countries including India through birth control, and also, implicitly, war and famine. Brent Scowcroft, who had by then replaced Kissinger as national security adviser, was put in charge of implementing the plan. CIA Director George Bush was ordered to assist Scowcroft, as were the secretaries of state, treasury, defense, and agriculture.

The bogus arguments that Kissinger advanced were not original. One of his major sources was the Royal Commission on Population, which King George VI had created in 1944 “to consider what measures should be taken in the national interest to influence the future trend of population.” The commission found that Britain was gravely threatened by population growth in its colonies – the biggest being India, since “a populous country has decided advantages over a sparsely-populated one for industrial production.” The combined effects of increasing population and industrialization in its colonies, it warned, “might be decisive in its effects on the prestige and influence of the West,” especially effecting “military strength and security.

NSSM 200 similarly concluded that the United States was threatened by population growth in the former colonial sector. It paid special attention to 13 “key countries” in which the United States had a “special political and strategic interest”: India, Bangladesh, Pakistan, Indonesia, Thailand, the Philippines, Turkey, Nigeria, Egypt, Ethiopia, Mexico, Brazil, and Colombia. It claimed that population growth in those states was especially worrisome, since it would quickly increase their relative political, economic, and military strength.

This policy, known infamously as ‘Depopulation Policy’ and now being normalised through Hollywood movies, the latest being Mission Impossible: Fallout and most aptly personified by Thanos in Marvel’s Infinity War was imported to India via the United Nations’ Agenda 21. Sadly many successive Indian Prime Ministers have been implementing this dangerous policy.