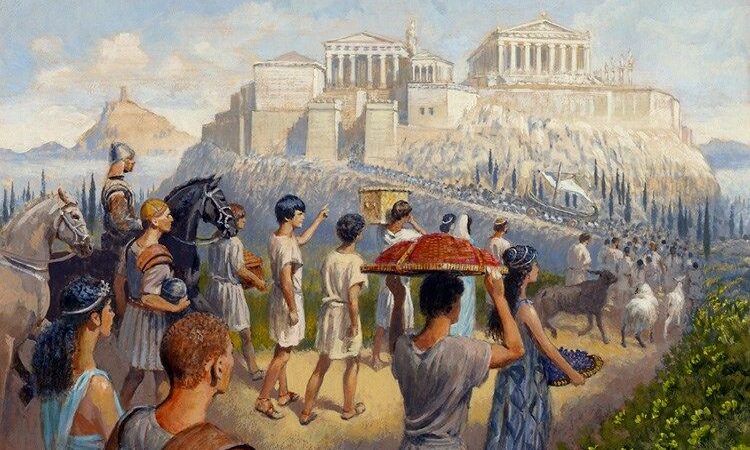 By Lipton Matthews on Mises.org

Economic freedom isn’t a modern invention. Throughout history, we find time and time again that those areas with the most economic freedom were the most prosperous. Activists in favor of economic freedom often limit themselves, however, to only a few times and places, and most lean on modern studies showing the benefits of the marketplace. It is possible to take a broader view, however, and market defenders could strengthen their argument by revisiting the larger historical track record of economic freedom.

Andreas Bergh and Carl Hampus Lyttkens in “Measuring Institutional Quality in Ancient Athens,” argue that economic freedom in ancient Athens was comparable to highly ranked modern economies such as Hong Kong and Singapore. The authors note that well-defined property rights, freedom to trade, and light regulations conduced an environment where commerce could thrive, thereby improving living standards. Due to the absence of draconian regulations, Athenians were able to freely experiment without a high degree of government opposition. Although Bergh and Lyttkens admit the limitations of their study, they nonetheless aver that economic freedom played a pivotal role in the success of ancient Athens: “We suggest that we may have uncovered one of the mechanisms through which democracy affects the material and cultural success of Athens.”

Furthermore, George Bitros and Anastassios Karayiannis in their article “Morality, Institutions and Economic Growth: Lessons from Ancient Greece” attribute the economic prowess of Athens to freedom in market institutions:

The Athenian economy in the 5th century BC functioned much like a modern market economy….Economic agents acted upon prices determined from the mechanism of demand and supply and aimed at getting the best value for their efforts….Trade disputes were resolved through an efficient legal system and arbitration.

Yet when discussing the Spartan economy the writers offer a remarkably different narrative:

By contrast, during the same period, the economy of Sparta operated in a closed economy context with its main focus on self-sufficiency in agricultural and husbandry products….Citizens were deliberately discouraged to undertake entrepreneurial activities….Therefore, it is not an exaggeration to say that this economy operated under a set of legal arrangements that stifled the efforts of citizens for material improvement and suppressed all human inclinations for economic progress.

Being a militaristic state, Sparta had little interest in entrepreneurship; instead, citizens were encouraged to master the art of plundering in order to advance the objectives of the state. Unfortunately, the violent culture inculcated by Sparta discouraged reverence for property rights and individual agency. The economic failures of Sparta duly inform us that culture is crucial to development. As Bitros and Karayiannis conclude:

To summarize, Sparta was organized as a military city-state. Citizens did not have private lives. They sacrificed themselves for the wellbeing of their city-state. Hence the moral norms they were trained to follow, both while serving in the army and later on, were compatible with the institutions that had been set up to advance the military objectives of Sparta….These were sufficient to make Sparta the top military power in the period under consideration without much else. No justice and no aidos; No fairness in economic transactions, because there were none, and no economic progress, because all economy related institutions had been planned centrally to attain self-sufficiency.

Humans are creative, yet when their ingenuity is enslaved by the force of government, the result is primarily stagnation and suffering.

Similarly, Josiah Ober posits that intense competition made ancient Greece a laboratory for institutional innovations that sparked growth. He notes:

The Greek world was arguably exceptional in its development of new social institutions that served to increase the level and value of social cooperation. Valuable institutional innovations were spurred by high levels of local inter-community competition and spread by inter-community learning….A state that succeeded in developing a more effective way to capture the benefits of cooperation across its population gained a corresponding competitive advantage vis à vis its local rivals.

The ancient Greeks teach us to appreciate the vital role of markets in fostering development and the significance of creating a competitive market for ideas. Greek poets and philosophers are frequently invoked to convey moral lessons. We should use the economy of ancient Greece as a reminder to critics of the market that the prosperity induced by economic freedom is indeed a timeless truth. The legacy of ancient Greece transcends its monumental accomplishments in philosophy and literature.