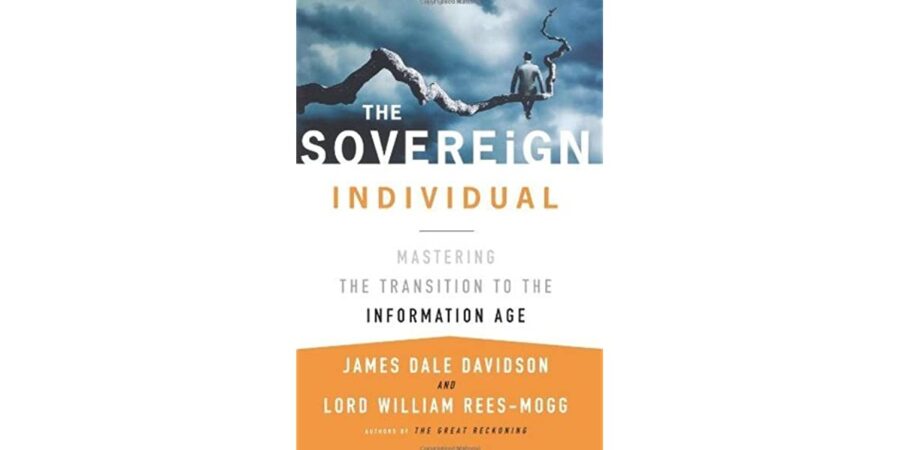 Authored by Bob Simon via BitcoinMagazine.com,

The following is the written version of a video presentation which can be viewed here.

THE WANING OF THE MODERN AGE

“In our view, you are witnessing nothing less than the waning of the Modern Age. It is a development driven by ruthless but hidden logic. More than we commonly understand, the next millennium will no longer be ‘modern.’ We say this not to imply that you face a savage or backward future, although that is possible, but to emphasize that the stage of history now opening will be qualitatively different from that into which you were born.

Something new is coming. Just as farming societies differed in kind from hunting and gathering bands, and industrial societies differed radically from feudal or yeoman agricultural systems, so the New World to come will mark a radical departure from anything seen before.”

Published in 1997 from authors James Dale Davidson and Lord William Rees-Mogg, “The Sovereign Individual” can best be described as a guidebook. The authors combine a deep investigation into the history of man with a careful analysis of praxeology, or the study of human action, to come to a startling conclusion: Our civilization is standing at the precipice of radical change. Those who recognize this change and take the proper actions will benefit immensely, while those who remain ignorant will suffer the consequences.

The book can also be viewed as a prophecy, making bold predictions about the future of civilization, many of which have already come to pass. A quarter of a century ago, while “experts” such as Paul Krugman were predicting that the internet would have little impact on the economy, Davidson and Rees-Mogg were predicting the emergence of the cybereconomy; non-state digital money; personalized media; the convergence of the telephone, computer and TV into a single device; as well as the record level of public distrust in major institutions currently unfolding before our eyes.

THE THESIS OF “THE SOVEREIGN INDIVIDUAL”

While religious and allegorical themes are beautifully woven throughout the book, the authors make it very clear that their thesis is rooted in hard logic, specifically a concept they call “the logic of violence.”

Throughout all of history, humans have had to deal with the simple truth that taking is often easier than making. Working hard to acquire possessions such as food, shelter and clothing means nothing if they cannot be protected.

The available methods by which humans have defended themselves and their property have transformed drastically from the time of hunter-gatherers up until the present day. In the authors’ views, it is this transformation of the logic of violence that is at the root of all major societal change throughout history.

The fundamental axiom of the book is this: Human action is guided by incentives. If we can become conscious of the incentives, then we can, to a certain extent, forecast human action. For example, dropping a $100 bill on the ground of any city in the world will produce very predictable results: someone will quickly pick it up.

To better understand the origins of these incentives, the authors introduce a concept called “megapolitics.”

“The concept of megapolitics helps illuminate some of the major mysteries of history: how governments rise and fall and what types of institutions they become; the timing and outcome of wars; and patterns of economic prosperity and decline. By raising or lowering the costs and rewards of projecting power, megapolitics governs the ability of people to impose their will on others.”

Unlike manmade political institutions, megapolitics exist outside of the realm of conscious direction. Davidson and Rees-Mogg describe the four basic types of megapolitical forces as being topography, climate, microbes and technology. Of these four, technology is described as “having played by far the largest role in determining the costs and rewards of projecting power during the modern centuries.”

It is the authors’ belief that the emergence of cryptography in conjunction with the borderless jurisdiction of cyberspace was poised to drastically alter the logic of violence, and therefore shift the balance of power from the state to the individual.

In the past, massive and expensive armies were needed to secure large amounts of wealth. Today, thanks to the invention of Bitcoin, wealth can be stored in the brain of any human being, simply by memorizing 24 words. Instead of needing to rely upon state-run institutions to uphold property rights, wealth in the 21st century will be protected by unbreakable cryptography, or in other words, pure mathematics.

Read as the authors describe in detail the eventual emergence of what they call “cybercash” and keep in mind that all this was first published in 1997:

“Now the advent of the Information Age implies another revolution in the character of money. As cybercommerce begins, it will lead inevitably to cybermoney. This new form of money will reset the odds, reducing the capacity of the world’s nationstates to determine who becomes a Sovereign Individual. A crucial part of this change will come about because of the effect of information technology in liberating the holders of wealth from expropriation through inflation. Soon, you will pay for almost any transaction over the Net the same time you place it, using cybercash. This new digital form of money is destined to play a pivotal role in cybercommerce. It will consist of encrypted sequences of multihundred-digit prime numbers. Unique, anonymous, and verifiable, this money will accommodate the largest transactions. It will also be divisible into the tiniest fraction of value. It will be tradable at a keystroke in a multi-trillion-dollar wholesale market without borders.”

THE STRUGGLE FOR SOVEREIGNTY

Sovereignty in this context is a zero-sum game. When individuals gain sovereignty, the state necessarily loses sovereignty over them. As citizens continue to take advantage of new technological innovations, institutions will naturally struggle to reclaim power.

We are not only seeing this with Bitcoin in the form of propaganda-style attacks launched by many central banks, but we are seeing it in legacy media as well. In the words of “The Sovereign Individual,” “The mass media will become individualized media… No longer will you be at the mercy of Dan Rather or the BBC for the news that reaches you. You will be able to select news compiled and edited according to your instructions.”

With the rise of alternative, independent and social media, the mainstream media has never held less power than it does today. Legacy news organizations are so desperate for significance that they do not hesitate to lie, manipulate and sow fear and hatred among its viewers in exchange for cheap clicks and views. So many of the biggest issues in society are kept alive by the mainstream media’s incessant desperation for relevance.

CNN’s recent spat with Joe Rogan provides us a real time example of legacy media’s waning influence. Rogan, a single man, was able to expose CNN’s lies about him by the simple virtue of the fact that he, himself, has a larger audience than CNN does.

We are entering a world where all voices will have the opportunity to be heard. The internet is providing each human being a chance to live up to their full potential. Geography, social class, gender and other labels are no longer limitations in the new digital world. The internet doesn’t care what you look like. If you are able to provide value, you will be rewarded.

As fascinating and impressive as the authors’ use of logic to accurately predict many aspects of our modern life is, perhaps equally fascinating is their ability to look into the deeper, more mysterious patterns of history.

“Giggle if you will, but we do not despise or dismiss intuitive understandings of history. Although our argument is grounded in logic, not in reveries, we are awed by the prophetic power of human consciousness… Understanding the way the world works means developing a realistic intuition of the way that human society obeys the mathematics of natural processes. Reality is nonlinear. But most people’s expectations are not. To understand the dynamics of change, you have to recognize that human society, like other complex systems in nature, is characterized by cycles and discontinuities. That means certain features of history have a tendency to repeat themselves, and the most important changes, when they occur, may be abrupt rather than gradual.”

The pattern they are referring to is a curious 500-year cycle which seems to correlate with paradigm shifting events in Western civilization. Beginning in 500 BC, the emergence of Greek democracy and philosophy laid the foundations of Western civilization. The birth of Christ in 4 BC, during the height of the Roman empire, set the stage for Judeo-Christian values becoming the bedrock of Western culture.

Five centuries later, in 500 AD, the fall of Rome would lead to the dark ages in Western Europe, a period of institutional collapse and lawless disarray. 1,000 AD marks the beginning of a period now known as the Middle Ages in which commerce and literacy were rediscovered. In the words of Raoul Glaber, an 11th century historian quoted by “The Sovereign Individual,” the turn of the millennium “shook off the tatters of antiquity.”

500 years later, around the year 1,500, the Renaissance, the Reformation and the discovery of the New World all contributed to what we view as the commencement of the modern era.

Now, here we sit 500 years later in the very early stages of the 21st century. Technological advances are being compounded exponentially. The era which gave birth to our modern notion of the nation state around the year 1,500 is coming to an end. As the balance of power shifts from the institutional level to the individual level, we would expect the legacy system to tighten its grip. This is exactly what we’re seeing.

Simply questioning the official story given by the state or mainstream media can result in being labeled a dangerous conspiracy theorist. Attempting to create a dialogue about important issues on social media can result in censorship and re-education. Suddenly, the inalienable right of bodily sovereignty encoded at Nuremberg is being revoked by governments throughout the world.

Citizens of many countries are literally trapped within the borders, unable to leave unless granted permission by their government. Innocent Australians are being removed from their homes and shipped in buses to internment camps where they are being held in isolation, and then hunted down when they try to escape back to their families.

Unable to fund these operations against their citizens via transparent taxation, governments and central banks throughout the world have resorted to printing exorbitant amounts of money resulting in the highest inflation in decades.

As unsettling as all this may be, it is all a part of a natural process. Metamorphosis requires death and rebirth. Old institutions are dying, and the madness we are witnessing all around us is simply evidence of their accelerating decay. Just as Gutenberg’s printing press broke the Catholic Church’s monopoly on information five centuries ago, Bitcoin is poised to break the state’s monopoly on money.

The stage is already set: Insolvent governments will continue to print money in an effort to maintain control over their subjects. The savings of millions of responsible people throughout the world will be wiped out as the value of paper trends towards zero. Many unwitting people will go down with the ship. But for the rest of us, a bright orange lifeboat awaits.