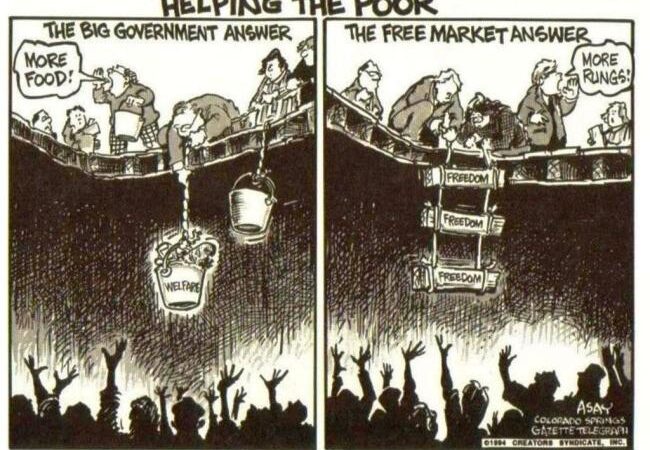 The view of the day is that the “greedy rich” are sitting on stacks of cash hidden away in Swiss bank accounts or the Cayman Islands that are doing nothing but fueling their acquisitive vanity while actively preventing the emancipation of their fellow man. With a little redistribution, those stacks of cash could eradicate poverty from the face of the earth and fund social programs that would help the many. After all, who really needs a billion dollars, let alone several billion?

The greatest challenge defenders of the market economy face today may be to convince the general public that private wealth actually fulfills a social function that is beneficial to all, and that it is an indispensable one. Redistributing wealth that is earned legitimately through the voluntary exchange of goods and services will actually prove harmful to everybody, and actively hinder the abolition of poverty.

First, we must accept that the majority of people feel a profound emotional sense of disapprobation at the very existence of the extremely rich. It seems unconscionable to them that one person might heat his private swimming pool all through the winter while others die of starvation. But is this really all that the billions of the “greedy rich” are doing? Buying yachts and funding champagne-fueled caviar parties at ritzy hotels?

Most people have the dim sense, of course, that when someone becomes very rich they “invest it,” whatever that means, but they do not have a clear understanding of what the consequences of those investments are. They maybe think, as Marx did, that “capital begets profit.” That all those digital dollars are doing is amassing interest, which is extracted from the economy, rather than paid in exchange for providing value to it.

In his book Socialism (1922), Ludwig von Mises made a startling observation starting with the fact that, in common usage, the term ownership typically applies to something that we enjoy exclusive control over for our own use—the private ownership of a toothbrush, say, or the exclusive use of the house we live in. Very few people have a problem with this form of ownership. Even the classic anarchists, starting with Proudhon, who declared that “property is theft,” acknowledged the right to property for personal use. The interesting point that Mises made is that the accumulated wealth of the capitalist is almost the opposite of this kind of property. Luxuries for the personal use of the ultrarich (such as their holiday homes) make up a tiny fraction of their total wealth. Almost everything they own is acquired for the almost exclusive use of others.

The ironic thing is that while it is wealth that is not for personal use that is widely lambasted and vilified by the opponents of affluence, it is precisely this wealth that fulfills the greatest social function. What the wealthy consume for personal use helps no one but themselves and the small number of people who were paid to manufacture it. It is precisely what goes beyond their personal needs that provides the most valuable service to others.

Private investment puts the accumulated wealth of society at the service of the consumer, that is to say, you and I. The man on the street is the final arbiter of what all the machines, factories, and corporations of the world are bound to produce. Joe Public determines which industries will soar and which will fall. He dictates what the engines crank out and what the laboratories research. If coffee goes out of fashion one year, the plantations had better switch to growing tea the next.

The “greedy” capitalist will only hold on to his wealth to the extent that he continues to adapt to our ever changing appetites. If he succeeds in guessing what the people of tomorrow will demand, his wealth will grow. This is the economy’s way of saying that this person has proven capable so far of making wise decisions with the capital that society has amassed, using it to provide things of value to others rather than wasting it on producing goods that the public has no interest in buying. He is proven. As a consequence he is allocated more resources to direct. If he manages them poorly they will be unceremoniously ripped from his possession without mercy. All those factories, machines and companies that his assets represent will be liquidated and sold off at knock-down prices to the next contestant, someone who believes they can do a better job of using those valuable resources in the public interest as the public sees it.

This constant process of wealth flowing out of the hands of bad investors and into those of good ones is effectively the constant reallocation of capital to those who can manage it best. Whether the public knows (or approves of) the big names of the richest people in the world, their assets are working in the background to provide them with cheaper goods and services of greater quality. Their wealth is serving us! If someone spends hundreds of millions of dollars developing a chemical plant that provides cheaper and better products, the primary beneficiaries are not the owners but the consumer!

We must insert the necessary caveat that this is true in proportion to the degree that we actually have a free market. That is to say, to the extent that consumers rather than government decide what is bought and sold. The allocation of government contracts to favored companies will not accurately reflect the preferences of consumers, and interventions into the economy often create preferential conditions for big business that slant production away from lines of production that people might prefer on an even playing field. According to the Sunlight Foundation, for the $5.8 billion that America’s two hundred most politically active corporations spent on federal lobbying and campaign contributions between 2007 and 2012, they received many times that (or $4.4 tn) back in “in federal business and support.”1

The allocation of resources to those who use them to produce what the public demands for profit promotes the accumulation of capital over time, capital that will also be put at the disposal of the consumer. Most people may still be under the illusion that only redistributing this wealth to the needy will fulfill the social end of eliminating poverty, but in fact it’s the increase in capital stock that lowers the prices of all goods and services, increases the productivity of labor that allows for higher wages, and spawns the technological innovations that allow us to enjoy the material standards of living that we do. If the price of a flat-screen TV falls by 95 percent over twenty years, that makes a real difference for the television buyer. Since virtually everything is cheaper than it was in the past, those with low wages are still wealthier than those with relatively high wages in the past, possessing phones more powerful than the computer that landed on the moon and goods that were once considered luxury items, such as a refrigerator, telephone, washing machine, air conditioner, or central heating.

This is the poverty-destroying social function of the private ownership of the means of production. We have seen this effect already in developed nations, and it is now thankfully spreading to places like Bangladesh, Indonesia, Cambodia, and many parts of Africa. If we were to redistribute this wealth and hand it out to the poor, it would soon be spent and their position would not be very much improved. Meanwhile, a generation of infrastructure that promises the permanent solution to world poverty would be lost.

Private ownership of the means of production is not some special privilege conferring advantages to the very wealthy at the expense of everyone else. In fact everyone else benefits from private ownership of the means of production. Capital investment, “greedily” aimed at turning a profit, increases the quality and decreases the price of goods, increasing the value of wages in real terms. After all, as Adam Smith said, “It is not from the benevolence of the butcher, the brewer, or the baker that we expect our dinner, but from their regard to their own self-interest.”