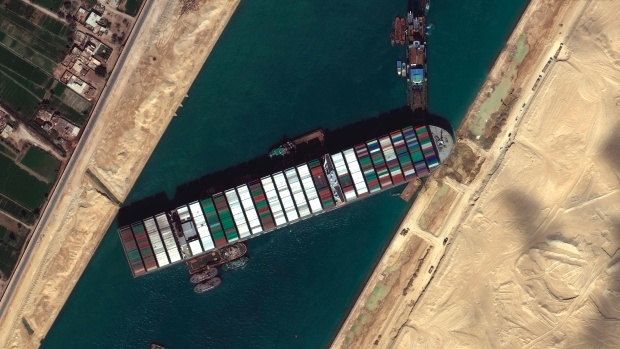 If protectionists were consistent, they should be lauding the captain of the Ever Given for his ability to disrupt trade.

By Tom G. Palmer on Fee.org

What a brilliant achievement! Supply chains repatriated. Trade deficits cut. Predatory trade reduced. A massive 1,312 foot-long container ship, the Ever Given, did with its enormous bulk what mere laws had failed to do: it blocked the flow of goods, many of which were intended to be brought to the United States. It did so by running aground in the Suez Canal, through which roughly 30% of global shipping container volume passes every year. It was a truly heroic achievement.

By running their ship aground in the Suez Canal, the owners of the Ever Given, Japanese firm Shoei Kisen KK, unilaterally realized the dream of Peter Navarro and other radical protectionists. For seven glorious days over $9 billion dollars worth of goods per day were stopped from flowing through the Suez Canal. Much of that was headed to the United States and would have added to the “trade deficit,” thus (allegedly) wrecking havoc on the United States. Many hundreds of ships loaded with hundreds of thousands of containers full of all kinds of exports are still backed up. The impact on supply chains will continue to be felt long after the forces of free trade got the ship back on its way. According to Lars Jensen, chief executive of Denmark-based SeaIntelligence Consulting, “The effect is not only going to be the simple, immediate one with cargo being delayed over the next few weeks, but will actually have repercussions several months down the line for the supply chain.”

Of course, no serious person would propose an award to the captain of the Ever Given, but there’s really no economic difference between the bulk of a gigantic ship physically blocking trade and the armed police of the Customs and Border Patrol coercively blocking trade.

Some people see trade across borders as negative. They believe that when you buy something from foreigners, you lose. They should thus be happy when goods are blocked from entering their country. Former president Donald Trump famously stated, “China has been taking out 500 billion dollars a year out of our country and rebuilding China.” In his view, that wealth left the U.S. and went to China, a view that oddly overlooks all the things that producers in China send to Americans, including computers, furniture, integrated circuits, sports equipment, electrical machines and, yes, tea. And it leaves out all the things American producers send to China, from aircraft to soybeans, cars and trucks to optical and medical instruments. The protectionist thinks that if you send money abroad, you’re losing. By the same logic, when I send money to my local grocery store, wealth is leaving my house in order to build someone else’s. I “lose” every time I buy food from the grocery, or electricity from the power company, or medicine from the pharmacy. That view is known as the “balance of trade.”

Adam Smith in his 1776 masterpiece, noted that “Nothing … can be more absurd than this whole doctrine of the balance of trade, upon which, not only these restraints, but almost all the other regulations of commerce are founded. When two places trade with one another, this [absurd] doctrine supposes that, if the balance be even, neither of them either loses or gains; but if it leans in any degree to one side, that one of them loses and the other gains in proportion to its declension from the exact equilibrium.”

The doctrine of the balance of trade has been around for centuries. It has also been refuted for centuries, but, like the “gambler’s fallacy” (thinking that observing five coin tosses resulting in “heads” makes it more likely that the next one will be “tails”), it’s persistent. As with the gambler’s fallacy, the fallacy of the balance of trade has to be exploded over and over.

The economist Henry George once pointed out that to block trade is to impose an embargo on ourselves, and that, “What protection teaches us, is to do to ourselves in time of peace what enemies seek to do to us in time of war.” We could add that it also teaches us to celebrate blocking goods-carrying ships from passing through canals. Of course, if we don’t celebrate physically blocking trade, we shouldn’t celebrate any other means of blocking it. The fallacies of protectionism, like the gambler’s fallacy, can be exploded with just a bit of logical thinking.