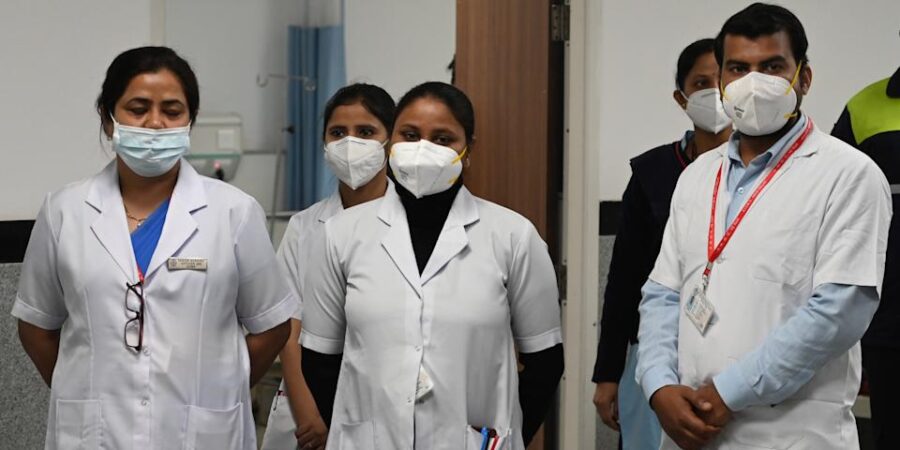 By Colin Todhunter on Offguardian.org

Western media outlets are currently paying a great deal of attention to India and the apparent impact of COVID-19. The narrative is that the coronavirus is ripping through the country – people are dying, cases are spiralling out of control and hospitals are unable to cope.

There does indeed seem to be a major problem in parts of the country. However, we need to differentiate between the effects of COVID-19 and the impacts of other factors. We must also be very wary of sensationalist media reporting which misrepresents the situation.

For instance, in late April, the New York Post ran a story about the COVID ‘surge’ in India with the headline saying, “footage shows people dead in the streets”. Next to it was an image of a woman lying dead. But the image was actually of a woman lying on the floor from a May 2020 story about a gas leak in Andhra Pradesh.

To try to shed some light on the situation and move beyond panic and media sensationalism, I recently spoke with Yohan Tengra, a political analyst and healthcare specialist based in Mumbai.

Tengra has carried out a good deal of research into COVID-19 and the global response to it. He is the co-author of a new report: ‘How the Unscientific Interpretation of RT-PCR & Rapid Antigen Test Results is Causing Misleading Spikes in Cases & Deaths’.

For India, he says:

We will never know statistically if the infections have really increased. To be certain, we would need data of symptomatic people who have tested positive with either a virus culture test or PCR that uses 24 cycles or less, ideally under 20.”

He adds that India is experiencing mainly asymptomatic cases:

In his report, Tengra offers scientific evidence that strongly indicates asymptomatic transmission is not significant. He asserts that as these cases comprise most of India’s case numbers, we should be questioning the data as well as the PCR tests and the cycles being used to detect the virus instead of accepting the figures at face value.

As in many countries across the globe, Tengra says people in India have been made to fear the virus endlessly. Moreover, they are generally under the impression that they need to intervene early in order to pass through the infection successfully.

The medical system itself works to boost the number of positive cases. Even with a negative PCR test, they are using CAT scans and diagnosing people with COVID. These scans are not specific to SARS-CoV-2 at all. I personally know of people who have been asked to be hospitalised by their doctors just based on a positive test (doctors can get a cut of the total bill made when they refer a patient to a hospital). This also happened to a Bollywood celebrity, who was asked to be admitted by his doctors with no symptoms and just a positive PCR.”

Faulty PCR testing and misdiagnosis, says Tengra, combined with people who want to intervene early with the mildest symptoms, have been filling up the beds, preventing access to those who really need them.

Addressing the much-publicised shortage of oxygen, Tengra implies this too is a result of inept policies, with exports of oxygen having increased in recent times, resulting in inadequate back-up supplies when faced with a surge in demand.

According to Tengra, the case fatality rate for COVID-19 in India was over three per cent last year but has now dropped to below 1.5 per cent. The infection fatality rate is even lower, with serosurvey results showing them to be between 0.05 per cent to 0.1 per cent.

The directors of the All India Institute of Medical Science and the India Council of Medical Research have both come out and said that there is not much difference between the first and second wave and that there are many more asymptomatic cases this time than in the so-called ‘first wave’.

Tengra argues that the principle is the same for all infectious agents: they infect people, most can fight it off without even developing symptoms, some develop mild symptoms, a smaller number develop serious symptoms and an even smaller number die.

Although lives can be saved with the right prevention plus treatment strategies, Tengra notes that most of the doctors in India are using ineffective and unsafe drugs. As a result, he claims that mortality rates could increase due to inappropriate treatments.

As has occurred in many other countries, Tengra notes the way that death certificate guidelines are structured in India makes it easy for someone to be labelled as a COVID death just based on a positive PCR test or general symptoms. It is therefore often difficult to say who has died from the virus and who has been misdiagnosed.

And the issue of misdiagnosis should not be brushed aside lightly. In a recent article by long-term resident of India Jo Nash, ‘India’s Current ‘COVID Crisis’ in Context’, it is noted that the focus of the media’s messaging and the source of many of the horrifying scenes of suffering – Delhi – is among the most toxic cities in the world which often leads to the city having to close down due to the widespread effects on respiratory health.

Nash also argues that respiratory diseases like TB and respiratory tract infections such as bronchitis leading to pneumonia are always among the top ten killers in India. These conditions are severely aggravated by air pollution and often require oxygen which can be in short supply during air pollution crises as happens at this time of the year.

As a result, it is reasonable to state that all is not what it might seem to be with regard to media reporting on the current situation.

It is interesting that this ‘second wave’ has correlated with the vaccine rollout (Nash provides official sources to support this claim). Tengra feels this might not be coincidental. He says that the ‘aefi’ (adverse events following immunisation) data vastly underestimates how many vaccine adverse reactions are taking place in the country.

Tengra says that, based on ground surveys and data collected by himself, there is a tremendous number of people who have fallen ill post vaccination, many of them then testing positive for COVID and becoming hospitalised.

The financial incentive for doctors to diagnose people with COVID could also mean many of the people who are ill with other conditions are being placed as COVID patients, while beds are under occupied for people for non-COVID health issues.

Two months ago, there was a lot of vaccine hesitancy in India and many people were not taking the jabs. Tengra notes that the government has had to up the ante in order to get people scared.

We are at a crossroads right now in terms of deciding the fate of our country and it will be interesting to see how this plays out.”

Tengra is working with lawyers and other concerned citizens to file legal cases to challenge the idea of asymptomatic transmission and the testing of healthy people. The aim is to also improve the testing in line with evidence-based protocols.

But that is not all:

We will also be challenging the current vaccine rollout, highlighting the issues with trials that have been conducted, adverse events, deaths, vaccine passports and other issues surrounding the subject.”

Tengra is not alone in challenging the mainstream narrative.

A recent article in India’s National Herald newspaper by clinical epidemiologist Professor Dr Amitav Banerjee argues that the current situation in India is not due to the lethality of the virus but by the numbers who are ending up in hospital, which are exposing cracks in India’s public health infrastructure and the inequitable distribution of health services. Even at the best of times, he argues, there is a mismatch of supply and demand. Little wonder, therefore, that we now see an emergency – not squarely due to COVID.

Like Yohan Tengra, Banerjee questions the scientific integrity of the responses to COVID and this includes the rollout of vaccines and the problems which this in itself could bring:

Referring to an editorial in the British Medical Journal by K. Abbasi (‘Covid-19, Politicisation, Corruption, and Suppression of Science’), Banerjee raises concerns about the suppression of science by politicians and governments and the conflicts of interest of academics, researchers and commercial lobbies.

In a global disaster, world leaders, their scientific advisers, including career scientists, are under tremendous pressure. They have to give the impression of being in control and may resort to authoritarian ways to camouflage their uncertainties. Such tactics deviate from the scientific approach. The present pandemic is full of such uncertainties and therefore a vicious cycle of repression has set in when the authorities and their advisers are faced with rising case numbers.”

None of what has been presented here is meant to deny the existence or impact of COVID-19. People in India are dying – some from the virus, others ‘with’ the virus but most likely mainly due to their pre-existing underlying conditions, and there are others who are being misdiagnosed.

Although excess mortality figures are currently unavailable, Yohan Tengra notes the average age of those who died in the first wave was 50. This time it is 49.

Professor Banerjee says that there is opacity and obfuscation instead of transparency. He calls for moral courage among scientists in advisory positions to the Indian government: scientific integrity is the need of the hour.

In finishing, let us place COVID and the global media reporting of the situation in India in context by returning to Jo Nash.

Even as the alleged COVID deaths reach their peak, more people die of diarrhoea every day in India and have done for years, mostly due to a lack of clean water and sanitation creating a terrain ripe for the flourishing of communicable disease.”

Readers can access the report How the Unscientific Interpretation of RT-PCR & Rapid Antigen Test Results is Causing Misleading Spikes in Cases & Deaths by Yohan Tengra and Ambar Koiri here.