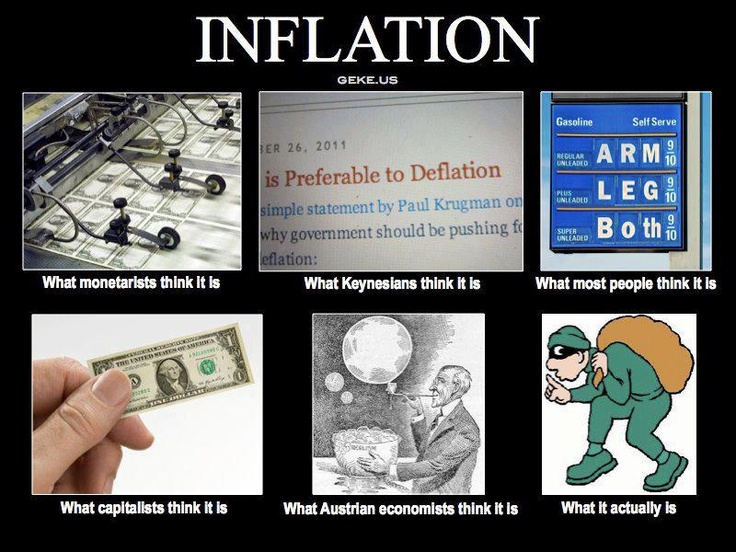 From Henry Hazzlit’s book ‘What You Should Know About Inflation’

What is Inflation, Really ?

Inflation, always and everywhere, is primarily caused by an increase in the supply of money and credit. In fact, inflation is the increase in the supply of money and credit.If you turn to the American College Dictionary, for example, you will find the first definition of inflation given as follows: “Undue expansion or increase of the currency of a country, esp. by the issuing of paper money not redeemable in specie.”

In recent years, however, the term has come to be used in a radically different sense. This is recognized in the second definition given by the American College Dictionary: “A substantial rise of prices caused by an undue expansion in paper money or bank credit.” Now obviously a rise of prices caused by an expansion of the money supply is not the same thing as the expansion of the money supply itself.A cause or condition is clearly not identical with one of its consequences. The use of the word “inflation” with these two quite different meanings leads to endless confusion.

The word “inflation” originally applied solely to the quantity of money. It meant that the volume of money was inflated, blown up, overextended. It is not mere pedantry to insist that the word should be used only in its original meaning. To use it to mean “a rise in prices” is to deflect attention away from the real cause of inflation and the real cure for it.

Why Inflation is Immoral

Inflation never affects everybody simultaneously and equally. It begins at a specific point, with a specific group. When the government puts more money into circulation ,it may do so by paying defense contractors, or by increasing subsidies to farmers or social security benefits to special groups. The incomes of those who receive this money go up first. Those who begin spending the money first buy at the old level of prices. But their additional buying begins to force up prices. Those whose money incomes have not been raised are forced to pay higher prices than before; the purchasing power of their incomes has been reduced. Eventually, through the play of economic forces, their own money incomes may be increased. But if these incomes are increased either less or later than the average prices of what they buy, they will never fully make up the loss they suffered from the inflation.

Inflation, in brief, essentially involves a redistribution of real incomes. Those who benefit by it do so, and must do so, at the expense of others. The total losses through inflation offset the total gains. This creates class or group divisions, in which the victims resent the profiteers from inflation, and in which even the moderate gainers from inflation envy the bigger gainers. There is general recognition that the new distribution of income and wealth that goes on during an inflation is not the result of merit, effort, or productiveness, but of luck, speculation, or political favoritism. It was in the tremendous German inflation of 1923 that the seeds of Nazism were sown.

An inflation tends to demoralize those who gain by it even more than those who lose by it. The gainers become used to an “unearned increment.” They want to keep their relative gains. Those who have made money from speculation prefer to continue this way of making money instead of working for it. I remember once, early in 1929, a conversation between two friends, both of whom held prominent posts as book reviewers but both of whom were heavily in the stock market. They were exchanging stories about their profits. “Today your salary,” they agreed, “is just a tip.” People do not like to work full time just for a tip. The long-term trend in an inflation is toward less work and production, and more speculation and gambling.

The profiteers from inflation tend to spend freely, frivolously, and ostentatiously. This increases the resentment of those who have been less favored. The incentive to ordinary saving, in the form of savings accounts, insurance, bonds,or other fixed-income obligations, tends to disappear. The spectacle of quick and easy returns increases the temptations to corruption and crime.

It is not merely that inflation breeds the gambling spiritand corruption and dishonesty in a nation. Inflation is it-self an immoral act on the part of government. When modern governments inflate by increasing the paper-money supply, directly or indirectly, they do in principle what kings once did when they clipped the coins. Diluting the money supply with paper is the moral equivalent of diluting the milk supply with water. Notwithstanding all the pious pretenses of governments that inflation is some evil visitation from without, inflation is practically always the result of deliberate governmental policy.