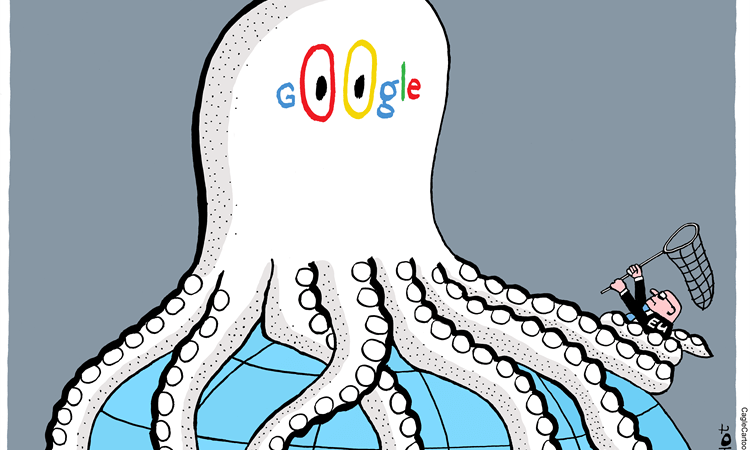 The ILR is no fan of Google (see here and here for example), but we shouldn’t confuse personal preferences with sound economics.

Original article by James Talocka on the Mises blog.

Both the Senate hearings on “Big Tech” companies and the Department of Justice (DOJ) lawsuit against Google amplify popular misunderstandings of what drives competition in the market for information. In any market, competition is a means to consumer satisfaction, the ultimate governor of which firms prevail, and which firms fail.

Tech giants such as Google, Facebook, Amazon, and Twitter have found themselves under the microscope of the federal government and the media for supposed “anticompetitive practices.” The Senate and the DOJ have leveled accusations ranging from monopoly to censorship, alleging these firms’ practices are detrimental to consumers. However, the dominance of these firms is almost entirely driven by consumers, making them exemplary competitors in a largely unrestricted market.

The profits of the Big Tech firms are primarily generated by advertisers, who pay tech platforms for access to their users. Like any other firm in the market, these firms would not make profits or gain market share if willing customers did not derive value from their products. In the case of Big Tech, more users create more traffic for advertisers, which translates into increased revenue.

The size of a firm is determined by how effectively they satisfy consumers relative to available alternatives. The Big Tech firms are worth a combined $5 trillion and have expanded products and services significantly over the last several years. The pandemic has also facilitated strong growth in tech due to consumers’ transition to online platforms.

These practices are out of sync with the rhetoric of regulators, who have been flirting with the idea of breaking up large tech firms. For instance, the DOJ’s lawsuit accuses Google of stifling competition and harming consumers by acting as “gatekeepers of the internet.” They are particularly focused on Google’s exclusive agreement with Apple, which requires Google to be installed as the default search engine on Apple devices. According to the DOJ, this (among other practices) reduces “the ability of innovative new companies to develop, compete, and discipline Google’s behavior.”

Regulators fail to realize that Google’s practices are competitive since they are disciplined by consumer preference. Contrary to the DOJ’s claims, Google’s search market dominance is indicative of their ability to innovate. Google has used their profits to compete with other tech companies in a multitude of markets, especially through widely used products such as Android, Gmail, and YouTube.

Google’s exclusivity agreement with Apple also does not live up to allegations of consumer harm. While the deal requires the preinstallation of Google on Apple devices, it is a great deal for iPhone users. The contract essentially subsidizes Apple in exchange for default browser rights, which lowers Apple’s costs of production and, presumably, their prices. Another important benefit for iPhone users is that they can still use an alternative search engine by downloading another browser free of charge.

Those who charge the Big Tech firms with monopoly claim to be concerned about maintaining a competitive market. But what good is competition if the best firms cannot distance themselves from the pack? Tech giants such as Google and Facebook have gained leads over their competitors by developing new products at little to no cost for consumers. The telltale sign of a monopolist is just the opposite: restricting output and raising prices.

This is not to say that all the consequences of market dominance are desirable. The effort by Big Tech firms to mitigate “misinformation” through censorship threatens to suppress dissenting opinion on the highest-traffic platforms. However, the availability of alternatives encourages competition by providing unsatisfied users the opportunity to act on their preferences.