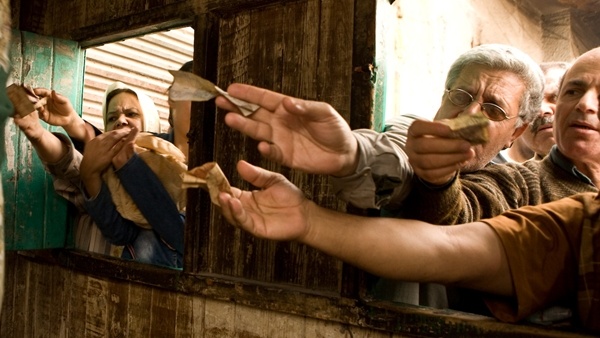 Is it time to worry about food inflation?

The reason this has suddenly become a hot topic is because while overall inflation remains subdued (we will spare a discussion here of why the CPI is purposefully distorted to stay as low as possible – readers can catch up here, here and here), food inflation has been on a tear in recent months. In fact, it has gotten so high that earlier this week Goldman published a report looking at “The Recent Spike In Food Inflation”, in which it noted that “in recent months, inflation has risen and surprised to the upside across a number of major EM economies (e.g. Turkey, South Africa, India, Brazil andRussia).” According to Goldman, one of the main drivers of these increases has been higher food inflation, which has coincided with a sharp increase in the price of some key agricultural commodities (e.g. grains, oils and soybeans).”

Yet despite admitting there is a clear food inflation problem, Goldman is quick to brush it off, making the following arguments:

In short, Goldman dismisses the risk of surging food inflation especially in emerging markets, because “given the limited size of the shock to date, and with other factors (such as spare capacity) weighing on EM inflation, the recent rise in agricultural commodity prices would need to extend quite a bit further for it to have a significant and lasting effect on inflation and monetary policy across the majority of EMs.“

One wonders if Goldman was just as dismissive during the food price surge observed in late 2010 that ultimately culminated in the Arab Spring of early 2011. As the Guardian reminds us:

“A decade ago this week, a young fruit seller called Mohammed Bouazizi set himself alight outside the provincial headquarters of his home town in Tunisia, in protest against local police officials who had seized his cart and produce.”

It is this backdrop that brings us a far more concerning note published this morning from everyone’s favorite permabear, SocGen’s Albert Edwards, who unlike Goldman is starting to worry about food inflation. A lot.

As Edwards explains, for much of the past decade he – and other Fed skeptics – have railed about the distorting impact of QE on asset prices. And aside from capital markets where the Fed’s intervention has spawned a record wealth divide leading to unprecedented political and social polarization, perhaps the most disturbing episode of such distortion was the abovementioned explosion of food prices that began towards the end of 2010. According to Edwards, many economists – this website included – believe the Fed’s QE2 was the primary cause for the 2010-11 bubble in food prices which contributed to the social unrest and ensuing revolutions in many Arab countries.

This is a problem because in a time when central banks are injecting a record $1.4 billion in liquidity every hour, and when most economists’ attention is now focused on the impact of the Fed’s QE on buoyant equity and industrial commodity prices, Albert says that “we should also watch the unfolding surge in food prices very closely indeed – and with trepidation.“

The reason for that is again what happened in early 2011 in Tunisia: That event marked the start of a chain reaction of social unrest around the Middle East and elsewhere that toppled governments and became known as the Arab Spring, Edwards writes and adds that “although the narrative of these revolutions had its origins in longstanding grievances and a thirst for democracy, many economists identified rocketing global food prices from the end of 2010 as the trigger. (T’was always so: certainly, higher food prices contributed to both the French and Russian revolutions, and to the 1989 unrest in China.)”

As for whether central banks were responsible for these revolutionary dominoes, Edwards is a bit more nuanced, writing that while they certainly spawned much of the asset reflation observed in late 2010, “the truth is that central banks have no control over which financial bubbles will ultimately emerge as they spray QE into financial markets.” It just so happens that food is one of them with alarming periodicity.

Case in point: bitcoin, which is soaring precisely because institutions have finally realized that central banks injecting 0.66% of GDP into capital markets every month will lift everything, even digital tokens with no intrinsic value. It will certainly lift food prices too.

So going back to the facts, Edwards writes that “one thing you may have missed recently is that the UN’s Food and Agriculture Organization’s (FAO) widely followed food price index (the basket measures prices for oilseeds, dairy products, meat and sugar)” which as shown above, has – once again – been surging over the last few months. As noted previously, the FAO food index rose for a sixth month running in November, on pace to hit a six-year high, with Edwards noting that “annual inflation in cereals reached 20%, the highest annual rise since mid-2011 when the Arab Spring was in full flow! (see chart below).”

Edwards then doubles down on his makes his feelings clear on who ultimately was to blame for the global tidal wave in food inflation back in 2011: “Despite Ben Bernanke’s denials that the Fed’s QE policies caused rampant food price inflation in 2011 (link), many economists such as myself believe that was absolutely the case.”

Next, Edwards expands on the superficial Goldman analysis, and points out that the effect of higher food prices tends to be much greater for EM countries that are 1) large net importers of food, and 2) where households spend a greater percentage of their income on food (ie they have a much larger weighting of food in their CPI basket).

What, however, makes the current episode of surging food prices even worse is that it comes in the aftermath of the global covid shock, which has had a crushing impact on the well-being of hundreds of millions of people around the globe. In fact, as the WSJ reports, surging food prices is not just an EM issue.

Edwards summarizes his concerns best with the following statement: “even in the richest country in the world, food poverty has become a real problem during this pandemic.”

But wait, because the real inflation may be just starting, and it has to do with the “beautiful reflation” trade that everyone is convinced is coming. As Edwards notes, “now that a vaccine has arrived, investors are revelling in the cyclical beneficiaries of policy stimulus such as equity markets overall, value stocks, a steepening yield curve, and industrial metals. Certainly, the latter has risen entirely in line with the recovery in the global PMI.”

One sector that would certainly benefit from the return of inflation is commodities (such as food). As we showed earlier this week, while commodities have been in a secular bear market for a long while now, the following charts from Crescat Capital suggest that we could be in for a powerful reversal. Edwards agrees, noting that he “and many others believe that the end of the Ice Age and transition to the Great Melt will be extremely beneficial for commodities.”

And as industrial commodities break upwards fuelled by the double-whammy of a cyclical recovery and extremely loose monetary policies worldwide, Edwards urges us to “keep a very close eye as to whether we see a repeat of the 2010/11 surge in food prices” because “on the 10th anniversary of the start of the Arab Spring, and with poverty having already been made much worse by the pandemic, another food price bubble could well be the straw to break the very angry camel’s back.”