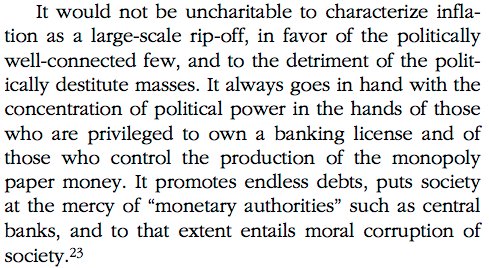 Notes by Jeet Sidhu on “Deflation and Liberty“, published on Twitter

1/ “When it comes to matters of money and banking, all practical political issues ultimately hinge on one central question: Can one improve or deteriorate the state of an economy by increasing or decreasing the quantity of money?”

2/ Why reject inflation? paper money results in:
a) 98% loss of USD purchasing power
b) increasingly worse crises
c) financial intermediaries financing businesses, instead of firms bootstrapping themselves
d) increasing debt on all levels of society
e) overgrowth of the state

3/ Why reject inflation?
a) long run detriments (above) outweigh short run benefits
b) short run benefits are illusory; mostly in pocket of one group at the expense of another group because the aggregate wealth of society remains unchanged.

4/ What happens in deflation?
a) Lower prices = less revenue for firms = firms w/ excess debt are unable to pay their loans, go in bankruptcy and change ownership
b) The new owners are able to run the firms profitably because they purchased at the new lower prices

5/ Both inflation and deflation are ultimately zero-sum, but

7/ There is no economic rationale for monetary policy to favor either inflation or deflation. Each benefits different groups.

Since deflation hurts those close to government production of money, it’s been demonized.

8/ Who should be able to change the money supply in a free society?

In a free market, money production is competitive & tends to be based on precious metals.

Paper money has always imposed by the coercive power of state, fiat is the money of a partially enslaved society.

Paper money’s production is excessive because it’s imposed and not constrained by free association.

10/ Inflation results in an unjustifiable redistribution in favor of those closest to the supply of money & money substitutes to the detriment of the rest of society.

Inflation is a powerful tool to shield the government and their closest allies in the business world from competition in the rest of society. Inflation puts a brake on social mobility so the rich stay rich and and the poor stay poor.

11/ Does inflation increase innovation? No
a) financing those favored by governments via inflation at the expense of everyone else is unfair
b) credit expansion tends to favor incumbents vs. upstarts
c) see recent money printing (post 2008) that has just increased asset prices

12/ Fractional-reserve banking and fiat money systems carry the seeds of their own destruction:
a) e.g. one fractional reserve market participant has a liquidity crisis, kicking off a bank run, creating a deflationary spiral, resulting in the bankruptcies of the overleveraged.
b) when the money supply is fraudulently increased & interest rates are depressed below market, cheap money resources are so misallocated at some point you have widespread bankruptcies
c) examples a & b are caused by deflation of money substitutes. Demand for actual paper money declining is rare because of legal tender laws and the massive inefficiency of barter.

Deflation destroys the economic basis of social engineers (inflation and debts) and puts a brake on concentration of power in the federal government. They will fight any attempt to reduce their control but deflation is the only acceptable monetary policy for a free society.