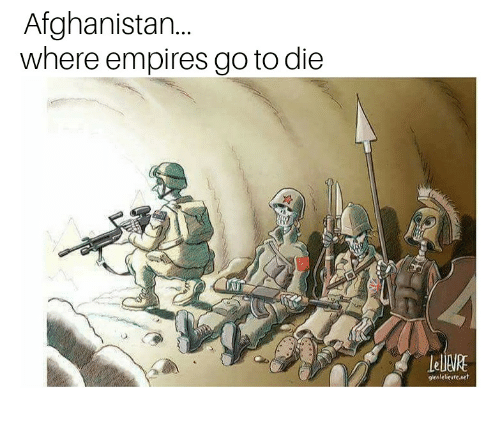 By Eric S. Margolis on LewRockwell.com

“Oh! wherefore come ye forth, in triumph from the North,
With your hands, and your feet, and your raiment all red?
And wherefore doth your rout send forth a joyous shout?”

‘The Battle of Naseby’ by Thomas Macaulay

After 20 years of B-52 carpet bombing of Afghanistan, murderous drone strikes, 350,000 puppet soldiers, 20,000 mercenaries, nearly two trillion dollars in US spending, destruction of countless Afghan villages, the killing up to one million Afghans, spreading the opium trade around southeast Asia and Europe, abetting wide scale torture…. after all this the US-run Afghan’s puppet `president’ and his drug-dealing cronies have fled embattled Kabul like thieves in the night.

Taliban – more accurately the Islamic Movement of Afghanistan – has been slandered by almost every western news outlet and wrongly called a terrorist movement linked to the late Osama bin Laden.  Heavily-propagandized Americans, Canadians and British have been inundated by this torrent of government lies against Afghanistan’s Pashtun (Pathan) people.

I was in Afghanistan with the newly created Taliban in the early 1990’s.  I walked from Pashtun village to village and had tea with the local chiefs, known as ‘maliks.’  The Pashtun treated me as an honored guest and welcome visitor.  These rough mountain warriors were the descendants of the fighters who had defeated four British invasions the previous century.  My book ‘War at the Top of the World’ examines the beginning of our Afghan War.

The fathers of these Pashtun fighters were the men who formed the anti-Soviet ‘mujahidin’ (holy warriors) that defeated the mighty Soviet Red Army with the secret help of US, British and most of all Pakistani intelligence.  Everyone in south Asia knew better than to mess with the Pashtun Afghans, including their blood enemies, Afghanistan’s ethnic Tajiks, Uzbeks and Hazara.

An old Hindu prayer goes, ‘Beware of the fang of the cobra, the claw of the tiger, and the vengeance of the Pathan (Pashtun)’

Taliban had just been created when I was visiting the usually off-limits frontier Tribal Territories on the Pakistan-Afghan frontier and the Khyber Pass leading into Afghanistan.  After the hurried Soviet pullout, Afghanistan fell into civil war or anarchy.  Armed gangs attacked caravans and raped many Afghan women, mostly in the Pashtun region.  In Islam, rape is a grave, intolerable crime.

As chaos spread, a one-eyed village preacher, Mullah Omar, a maimed veteran of the anti-Soviet struggle, organized a group of his young religious students, known as ‘Talibs,’ to protect the local village women and defend the caravans.  As the late Benazir Bhutto told me, she ordered Pakistan’s   Home ministry to arm the Talibs.

At that time, the Afghan Communists were waging a war to keep control of the countryside and, most important, the nation’s lush opium fields, which financed the anti-Taliban Northern Alliance and Communist Party.  Once Taliban defeated the Tajik-Communist alliance, opium production in Afghanistan fell by over 90%.  Until then, Afghanistan was the world’s leading producer and exporter of opium.  This narcotic was then exported with full Communist approval to the Soviet Union/Russia, Iran, Central Asia an onward to northern Europe.  Afghanistan’s ethnic Tajiks, many Communist dominated, ran most of the drug trade.

Taliban crushed the Afghan drug trade and ended some of the attacks on women.  But its members were mostly rough-hewn mountaineers of the very old school.  They often treated women badly, as was the custom, but certainly far less brutally compared to the often-murderous way girls and women were mistreated or murdered in India, a US ally, or by US air raids on Afghan towns and villages.

Afghanistan’s urban education system was heavily infiltrated by the Afghan Communist Party which used female education as a way of infiltrating government.  A major reason for Taliban’s hostility to female education was that it was viewed as a communist plot.

Today’s Taliban is a younger generation of mountain people, better educated and less narrow-minded than their rustic elders.  I was invited by its leadership to attend peace talks in Doha.  Meanwhile, one hopes that American right-wingers do not get the US to stage new military operations against Afghanistan to prolong this 20-year conflict.  Let the Afghans sort out their own messy ethnic issues without interference by their neighbors.  A new coalition government that includes non-Taliban leaders like former president Hamid Karzai, Abdullah Abdullah and Gulbuddin Hekmatyar should be encouraged and supported.  War criminals like Uzbek warlord Rashid Dostum should be prosecuted.

We have to stop drinking our own Kool-Aid over Afghanistan, stop believing our own western and communist propaganda and try to accept that what we are so far seeing is the liberation of this war-ravaged land from four decades of first Soviet, then US occupation.