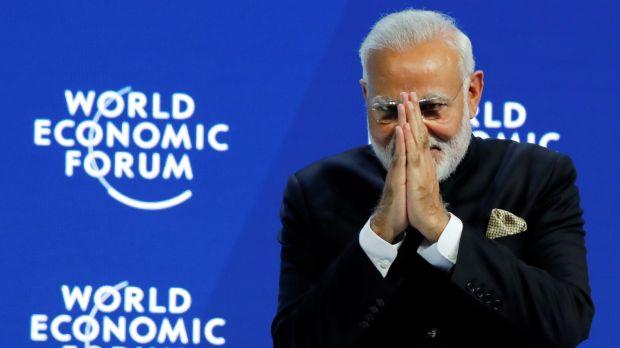 Benito Mussolini, Italy’s dictator from 1922 to 1943, is perhaps best-remembered as Hitler’s inept ally who was strung up by his outraged countrymen.

But he originated an economic system – economic fascism – that was acclaimed in his heyday, influenced U.S. economic policy during the 1930s, and is surprisingly similar to some of Narendra Modi’s policies.

Just like Modi, Mussolini had humble beginnings. The son of a socialist blacksmith, Mussolini believed in government ownership and government control of the economy. He became outraged when socialists opposed Italian entry in World War I, because he figured that Italy could emerge from the war with an empire like Great Britain, France and Germany. So he blended nationalism with socialism and came up with economic fascism. This involved private ownership and government control of the economy. Individuals continued to own their property and their businesses, but without the right to do what they wanted. Government told everybody what they must do and not do.

“Anti-individualistic,” Mussolini wrote, “The Fascist conception of life stresses the importance of the State and accepts the individual only in so far as his interests coincide with the State. It is opposed to classical liberalism [or libertarianism, as it’s also called] that denied the State in the name of the individual; Fascism reasserts the rights of the State…If classical liberalism spells individualism, Fascism spells government.”

Individualism seemed to be the ideology that Mussolini and fellow fascists hated the most. They repeatedly disparaged it, referring to “the evil influence of individualism…the debacle of individualism…the individualistic conception of life in which man is subject only to the rule of his animal nature…individualism led to class struggle and national wars…[by contrast] fascism is an idealistic philosophy of life… the citizen in the Fascist State is no longer a selfish individual who has the anti-social right of rebelling against any law of the Collectivity.”

Mahatma Gandhi called Mussolini “one of the great statesmen of our time.” In the mid-1920s, Winston Churchill met Mussolini and said: “If I had been Italian, I am sure I would have been with you from the beginning.” The British playwright George Bernard Shaw declared that “socialists should be delighted to find at last a socialist [Mussolini] who speaks and thinks as responsible rulers do.”

Mussolini seems to have been the New York Times’ favorite dictator. For example, in 1923 the Times quoted magazine writer Isaac Marcosson as saying, “Mussolini is a Latin [Teddy] Roosevelt who first acts and then inquires if it is legal. He has been of great service to Italy.”

In 1926, Times reporter Anne O’Hare McCormick ravished Mussolini with superlatives. She wrote that he was “genial and affable…so moderate that his followers chafe at his restraint…[but] in public sometimes he was Julius Caesar…Sometimes he was Napoleon…He will always be cool before bombs, masterful when there is need of mastery…He is a voracious learner and never makes the same mistake twice…His sharp intuitions are aided by good ears. He learns by listening. When there are long discussions of technical, economic or financial problems, he can perform the feat of remaining perfectly quiet for hours, absorbing all the experts know…He looks younger, fitter, more electrically alive than ever…The whole country is keyed up by his energy.” Soviet mass murderer Josef Stalin never looked this good when he was being white-washed by Times Moscow bureau chief Walter Duranty.

In 1935, Times foreign correspondent Herbert Matthews offered this commentary when reporting on Mussolini’s decision to invade Ethiopia: “If you start from the premise that a lot of rascals are having a fight, it is not unnatural to want to see the victory of the rascal you like, and I liked the Italians.” Matthews later became a member of the Times Editorial Board and white-washed Fidel Castro when he established a communist regime in Cuba.

A similar pattern can be found in Narendra Modi’s policies.

What specifically are such policies? Here are 10 key points:

1. It begins with the belief that all of us owe unconditional allegiance to our nation-state that, according to fascist theoretician Mario Palmeri, will achieve “a new and higher form of life founded upon the basis of a fairer distribution of good things among the various classes…The state must be a social, political, economic, moral and religious organism built as a pyramid, and at the top is the national hero, the greatest man of his time.” Mussolini is credited with originating the totalitarian formula: “all is for the state, nothing is outside the state, nothing and no one are against the state.”

2. Economic fascism is a variety of socialism – individual rights may be routinely suppressed in the name of “social justice,” “national greatness” or some other utopian ideal. The Austrian economist Ludwig von Mises pointed out that “the economic program of Italian Fascism did not differ from the program of British Guild Socialism as propagated by the most eminent British and European socialists.” See, for example, Sidney and Beatrice Webb’s A Constitution for the Socialist Commonwealth of Great Britain (1920).”

3. When government becomes dysfunctional, because of runaway spending, unsustainable debt, a war gone wrong or other crises, people often clamor for a strong man to restore order. Mussolini recalled the horrors that led him to seize power: “We saw passing before our eyes the dreadful panorama of chaos and of evil forces which had broken into a gallop, tragic beyond words to one who loved his country.”

6. Political leaders must be willing to play hardball. Mussolini seemed to admire the German statesman Otto von Bismarck who famously remarked, “Not through speeches and majority decisions will the great questions of the day be decided, but by blood and iron.” Mussolini recalled his battles against communists: “It was time for chivalrous violence to beat the violent forces of evil on the very ground they had chosen…Fascism, a unique lighthouse in a sea of cowardice and compromise, engaged itself in battles…the iron necessity of violence was confirmed.” Mussolini didn’t see any reason to tolerate publishers with politically incorrect views. He bragged, “I abolished the subversive press whose only function was to inflame men’s minds. Not a day goes by that we do not feel in Italian life how much good has been wrought by these measures against the forces of disintegration, disorder and disloyalty.”

7. The most effective way to attract political support is to give away other people’s money. Monthly payments are better than a lump sum, since monthly payments encourage dependence. Bismarck observed, “Whoever has a pension for his old age is far more content and far easier to handle than one who has no such prospect.” Mussolini doubled the number of bureaucrats, in part, to put intellectuals on the public payroll so they would have incentives to praise him endlessly. He subsidized friendly newspapers, providing paychecks for many journalists.

8. Build up political slush funds by awarding subsidies, tax breaks, tariff protection and regulatory carve-outs for capitalist cronies. They will become dependent on continued special favors. During the 1930s, reportedly three-quarters of Italian businesses were dependent on special favors, and they were anxious to make more political contributions.

9. Seduce the media. Journalists tend to be wowed by power, they love to be flattered, they enjoy writing about colorful personalities and dramatic spectacles. Mussolini organized the October 1922 March on Rome, when tens of thousands of fascists gathered in major cities and moved toward the capital. This intimidated King Victor Emmanuel who decided that the least bad option was to avoid a violent coup by asking Mussolini to form a government. After he did that, he began to consolidate his power. His regime produced a bewildering number of parades, ornate uniforms, photo opps and mass gatherings. Public works construction proceeded apace all over Italy – some 400 bridges, 4,000 miles of roads and grandiose buildings for fascist party offices, post offices and sports arenas. Mussolini vowed that within five years, Italy would become “as powerful as it was in the times of the Augustan empire.”

10. Be humble. People don’t like arrogance. Truth be told, Mussolini was never very humble, but he pretended. That was better than nothing. In his autobiography, he wrote, “I was certainly not moved by a desire for egotistical political domination. I obeyed the positive command of my conscience, not any opportunism. I have always had a vision of life which was altruistic.”

What was the impact of economic fascism?

The boom boosted Mussolini’s political standing and enabled him to pursue what he really wanted: government control of the economy. In 1925, he dismissed De’ Stefani. Mussolini established the cartels for businesses, banks, labor unions, farmers and professional people. He introduced conscription for non-military work as well as for military service. As a result of myriad interventions, industrial production was down, imports were down, exports were down, and unemployment was up. Instead of concluding that his interventions had failed, Mussolini decided that even more interventions were needed.

Because Mussolini centralized decision-making and established big bureaucracies, the government caused more economic chaos. Historian Denis Mack Smith learned that “a never‑ending stream of officials passed through Mussolini’s office each day to receive his orders, though he had no means of checking that his orders were carried out. Officials generally pretended to obey and took no action at all. His chief preoccupation was to make sure newspapers reported that he had given orders on every conceivable topic including sports. There was a jungle of overlapping bureaucracies where Mussolini’s orders were constantly being lost or purposely mislaid. Any fascist party official could issue an order purporting to come from Mussolini, as its authenticity was hard to check. By trying to control everything, he ended up controlling very little.”

Mussolini’s massive public works spending created government jobs and the illusion of prosperity, paid for with debt that skyrocketed — before World War II spending began. Historian R.J.B. Bosworth reported, “On a table of European states, Italy lay 18th in caloric intake, perhaps the starkest of all indices of well-being. The most wretched conditions were to be found in rural Italy” – where most of the people lived.” As far as the living standards of ordinary people were concerned, fascism seemed about as bad as any other form of socialism.

Nonetheless, some fascist policies were adopted in many places, including the United States during the 1930s. They are currently being adopted by Narendra Modi.

President Franklin Delano Roosevelt embraced it when he signed the National Industrial Recovery Act (1933) that empowered him to authorize hundreds of industrial cartels to restrict output, maintain above‑market prices and wages. Restricting output made it harder for the economy to expand and recover from the Great Depression. Above-market prices discouraged consumers from buying. Above-market wages discouraged employers from hiring people. Such policies were a major reason why FDR’s New Deal prolonged the depression.

As we know, Narendra Modi has promoted crony capitalism, he has expanded government control of the economy, and he has become increasingly lawless. He has signed on to several boondogle schemes, even though he campaigned on the premise that ‘government has no business to be in business’.

Where might India go if a president embraces Mussolini’s leadership secrets?

The same place where Mussolini led Italy: straight to hell.