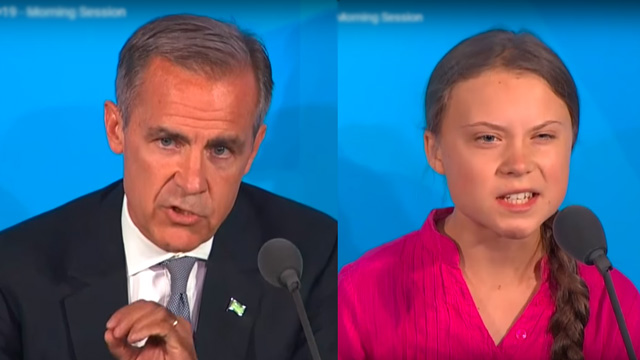 The escalating push for a transition to a “sustainable economy” can only be understood in the context of the utter bankruptcy of the global financial system. In fact, it is the bankruptcy of the world’s financial system—the most powerful tool through which strategic control is exerted over nations—which is the primary issue. The attempt to salvage it under the auspices of a “low emissions economy” is merely a way to more effectively achieve the overall strategy of those who control it: starving large parts of the planet of the financing necessary to develop, while controlling global financial flows for their own ends.

This is not hyperbole. Mark Carney, the Governor of the Bank of England, said as much in his key address to the UN Climate Action Summit on September 23, 2019, where he announced a compact by the 130 top banks to channel all investment into speculative “green” boondoggles, while supporting the demands of the Paris Accord to shut down three-quarters of the world’s thousands of coal-fired power plants by 2030—a policy which would send infant mortality up and lifespans down, especially in the developing world, for lack of electricity. This would be enforced via a set of new financial institutions such as the Green Finance Initiative and the Task Force on Climate-related Financial Disclosures.

This grouping is made of the same private banks, central banks, and policy makers who crashed the global economy in 2007-08. Nothing has fundamentally changed about how the global financial system is organized that would prevent another, even larger crash from occurring. Now, these same banking elites want you to believe that they are suddenly defenders of wildlife and stewards of the environment.

However, their goal is not to “save the planet” or to ensure a better future for people; it is to maintain the effectiveness of their primary means of exerting political control over the institutions and economies of the world.

2004: Al Gore and David Blood found Generation Investment Management (aka Blood and Gore), along with partners from Goldman Sachs, to make money on the carbon trade.

2006: British government commissions a 700-page report by the London School of Economics on the “economics of climate change” and how to build a Green Finance system.

The World Bank sets up a Carbon Finance Organization.

2007: Feb. 15, CEO of Royal Dutch Shell Jeroen van der Veer calls for a global cap-and-trade: “For more impact, the system must be global.”
Al Gore testifies in front of Congress, and says, “Put a price on carbon… As soon as carbon has a price, you are going to see a wave [of investment] in it.”

“Taking money—yeah, we’ve got to take it. It doesn’t matter that it comes from someone rich…. We’re dealing with people who are crying at night, the same as we are…. So what does a super rich person do? Commit suicide and burn all their money? No. What we want them to do is do the decent thing: Ring us up, and give us that million quid.”
—Extinction Rebellion co-founder Roger Hallam, August 2019

The same billionaires who aim to make large profits with so-called “green finance” schemes for high-tax, high-cost “renewable energy” technologies, have been mobilized to finance the green movement. Here is a sampling: