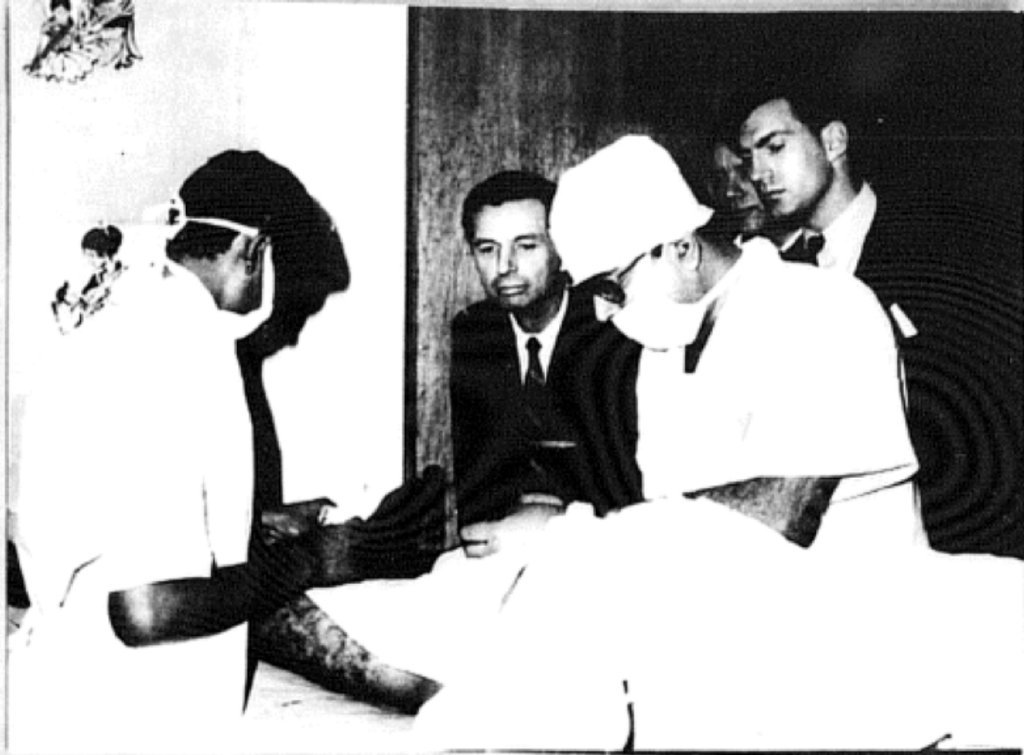 At the end of World War II, when the world was still learning of the horrors of the Nazi genocide, and the Nuremberg Tribunals were just barely getting underway, the British Monarchy immediately launched a revival of the very same policies of race science and population genocide that had produced Nazi euthanasia and the death camps.

The revival of the eugenics movement came thinly veiled under the names of “ecology” and “conservation.” In the immediate post-War years, agents of the British Crown created a series of environmentalist organizations which would form the basis of the new eugenics movement. To this day, those same organizations are the leading promoters, worldwide, of a mass genocide, in the name of “preserving nature.”

In 1946, ardent eugenicist, depopulationist, and later co-founder of the World Wildlife Fund Sir Julian Huxley wrote in the founding document of the newly established United Nations Educational, Scientific and Cultural Organization (UNESCO), of which he was the first Director General:

It seems likely that the dead weight of genetic stupidity, physical weakness, mental instability, and disease-proneness, which already exist in the human species, will prove too great a burden for real progress to be achieved. Thus even though it is quite true that any radical eugenic policy will be for many years politically and psychologically impossible, it will be important for UNESCO to see that the eugenic problem is examined with the greatest care and that the public mind is informed of the issues at stake so that much that now is unthinkable may at least become thinkable.

With luminaries such as Huxley, Sir Arthur Tansley (a rabid Malthusian, who coined the term “ecosystem”), and Secretary of the Privy Council Max Nicholson at the helm, the effort to hijack the post-War anti-imperial sentiment and to ensure the continuation of the British Empire gained momentum.

Today, this has culminated in the desperate effort, through the UN and the UNIPCC to induce nations to sign a suicide pact of zero-growth, zero-development, all under the fraud of the danger of CO₂ emissions (read more about the fraud and an introduction to the deeper questions of climate science)—with those who protest called, ironically, “climate deniers” by those who conspired to put Hitler into power in the first place.

1903 — Society for the Preservation of the Wild Fauna of the Empire established under the British Crown.

1912 — Society for the Promotion of Natural Reserves is founded by banker Charles Rothschild, and identifies 284 areas in Britain to be set aside from all human activity (the “Rothschild Reserves”).

1913 — British Ecological Society founded, with Tansley as its first President.

1931 — The think tank Political and Economic Planning (PEP) is founded by Huxley and Nicholson. It works closely with the British Eugenics Society (BES) throughout its existence.

1931 — Huxley writes “The Vital Importance of Eugenics,” and calls for the sterilization of “mental defectives” in order to prevent the degeneration of the species.

1944 — PPC leads to founding of Royal Commission on Population, to examine the “consequences” of population trends.

1945 — Wildlife Conservation Special Committee (the “Huxley Committee”) founded by Huxley, Tansley, and Nicholson, declares the need for a broad ecology and conservation agenda, which leads to the establishment of the Nature Conservancy.

1946 — The Nature Conservancy founded under the crown, at the direction of the Privy Council (Nicholson was Secretary of Privy Council from 1945-52). Tansley is first director.

1946 — Founding conference of UNESCO, with Huxley as Director General.

1948 — UNESCO conference in Fontainebleau, France launches the International Union for the Conservation of Nature (IUCN). There, Huxley said, “The spread of man must take second place to the conservation of other species.”

1951 — Tansley writes “What is Ecology?” in which he calls for a drastic reduction of the birthrate of the “more prolific races,” such as those in India.

1952 — The Population Council founded in the US at a meeting including eugenicist Frederick Henry Osborn; principle funding from the John D. Rockefeller Foundation.

1960 — Huxley goes to Africa for three months. He writes in The Observer that the newly independent African nations could not be trusted to preserve nature and endangered species within their borders. In “response,” the IUCN launches a worldwide movement to force the creation of nature reserves under independent international control on the African continent.

1961 — World Wildlife Fund founded by Nicholson and Huxley, with Prince Philip of Britain and Prince Bernhard of the Netherlands (who, in order to facilitate his royal marriage, regretfully resigned from the Nazi Party in 1934 with the words, “Heil Hitler”) as heads. Nicholson: “The message of ecology . . . undermines many recent cherished values and beliefs by a kind of seismic upheaval which is bound to leave in its train heaps of intellectual and ethical rubble. Seismic seems the right word because the emotional force and intensity behind the idea of conservation is as important as its intellectual power.”

1962 — Huxley gives the “Galton Lecture” to BES, and publishes the paper, “Too Many People.”

1962 — Rachel Carson writes Silent Spring, a diatribe against DDT, based on falsified studies.

1968 — The Club of Rome is created. Its founding document, “The Predicament of Mankind,” links problems in the world such as malnutrition, poverty, and pollution, to overpopulation, and calls for a systemic solution.

1970 — Prince Bernhard and Anton Rupert launch the 1001 Club, to guarantee a $10 million per year warchest for the WWF.

1972 — The Club of Rome publishes The Limits to Growth, which peddles the lie of finite resources.

1972 — The United Nations Environment Programme (UNEP) is founded. Maurice Strong, one of the architects of Earth Day, is named Executive Director.

1975 — Mead organizes a conference, “The Atmosphere: Endangered and Endangering,” which launches the global warming hoax. Attendees concluded that to get people to change their behavior, very scary scenarios had to be offered to the public.

How the United Nations Was Used to Implement the Hoax

In the 1970s, the UN sponsored a series of conferences on population reduction. Following this, it came to serve as the venue for intense green propaganda and ever more coercive pressure for nations to submit to economic destruction in the name of saving the Earth. The International Union for the Conservation of Nature (IUCN), founded by Julian Huxley in 1948, acted officially with the UN all the way, having been granted official UN observer and consultative status.

1982 — The UN Charter for Nature, prepared by the IUCN, is passed by the UN General Assembly. It declares, “Nature shall be respected and its essential processes shall not be impaired,” putting mankind’s needs second.

1987 — Release of the report “Our Common Future” (the “Brundtland Report”) by the World Commission on Environment and Development, at the request of the UN. Puts the term “sustainable development” into common parlance.

1988 — The UN commissions the Intergovernmental Panel on Climate Change (IPCC), which becomes the loudest voice insisting on reducing human numbers and activity in order to stop global warming. Since 1990, the IPCC has published dozens of reports on different facets of its “sky-is-falling” message. Part of the IPCC’s function has been to demoralize scientists into submission to the green hoaxes through its influence on grants and funding for research, as well as pushing the facade of total “consensus” among scientists.

1989 — GLOBE International (Global Legislators Organization for a Balanced Environment) is formed — a new world entity to corral parliamentarians committed to “overseeing the implementation of laws in pursuit of sustainable development.”

1992 — Rio Summit (officially the UN Conference on Environment and Development) held in Rio de Janeiro. The conclave of 172 governments, with 116 heads of state, agrees to the UN Framework Convention on Climate Change (UNFCCC).
Under the UNFCCC, a Conference of the Parties (COP) is held each year, to push for compliance on reducing greenhouse gas emissions by specified deadlines in the near term.

1997 — COP 3 is held in Kyoto, Japan. The “Kyoto Protocol” demands that nations submit to a legally binding agreement to collectively reduce global emissions of greenhouse gases by 5.2% by 2010, compared to 1990 levels. (This represents a cut of over 25%, relative to the trend of expected levels of emissions.) Many nations balk. A series of “commitment periods” begins, in an attempt to keep the process going.

2015 — COP 21 in Paris, France. The Commonwealth Heads of Government meeting just prior calls for a legally binding agreement. The Paris Agreement demands that nations take dramatic action to limit global temperature rise to no more than 2 °C by 2100. Members of the G77 developing nations speak out in protest, comparing the Agreement to apartheid.

2017 — President Trump withdraws the United States from the Paris Agreement. In response to this and other “crimes,” the British House of Lords releases a public document in 2018 which declares that President Trump cannot be allowed to have a second term.

2019 — The Climate Action Summit opens the week of the UNGA. Bank of England Governor Mark Carney announces that 130 of the world’s prominent (criminal) banks, claiming $47 trillion in assets, will blacklist any company (and, implicitly, nation) which does not go along with the green hoax. These new “principles of responsible banking” have been in the works since the 2015 COP 21. Abused teenager Greta Thunberg is brought in to attempt to shame world leaders and rally a new children’s crusade to ram through the green agenda.

‘The Enemy Is Humanity’

The intended result of this process is to kill people.

The toll of death and deprivation is measurable, under the various green mandates for curbing necessary activity across the different sectors of the economy — power, water, farming, industry, transportation, and even space.

There could be no more explicit statement of this goal, than that by the Club of Rome in its 1991 document, The First Global Revolution:

“In searching for a new enemy to unite us, we came up with the idea that pollution, the threat of global warming, water shortages, famine and the like would fit the bill…But in designating them as the enemy, we fall into the trap of mistaking symptoms for causes. All these dangers are caused by human intervention and it is only through changed attitudes and behavior that they can be overcome. The real enemy, then, is humanity itself.”