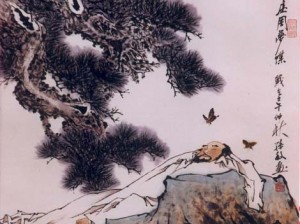 There is a famous scene in The Matrix where Neo (Keanu Reeves) visits the Oracle, a wise, mysterious, and powerful figure who can see the future.

While there, he encounters a gifted child who bends a spoon with his mind. After doing the impossible, the bald-headed child hands the spoon to Neo and tells him something.

Spoon Boy: Do not try and bend the spoon. That’s impossible. Instead, only try to realize the truth.

Spoon Boy: There is no spoon.

Neo : There is no spoon?

Spoon Boy : Then you’ll see, that it is not the spoon that bends, it is only yourself.

When I first watched this scene 20 years ago, I had no idea what Spoon Boy was talking about.

But at some point between now and then I learned. (Google is handy for extracting meaning from cryptic movie scenes you can’t decipher on your own.)

The scene is a reference to a poem written by a Chinese philosopher who lived during the 4th century BC. His name was Zhuang Zhou (also known as Zhuangzi) and his poem “Butterfly Dream” goes like this:

Once upon a time, I dreamt I was a butterfly,

fluttering hither and thither, to all intents and purposes

a butterfly. I was conscious only of my happiness as a

butterfly, unaware that I was myself. Soon I awaked,

and there I was, veritably myself again. Now I don’t

know whether I was then a man dreaming I was a

butterfly, or whether I am now a butterfly, dreaming I am a man.

The theme of reality versus dream runs throughout The Matrix, and Zhuangzi’s poem addresses a similar question, one philosophers have struggled to answer for millennia: how can we know what’s truly real when our senses deceive us?

Spoon Boy was expressing a version of this idea: the only thing that’s certainly real to us is mental experience.

Twenty-five hundred years later, Zhuangzi is mostly forgotten outside of philosophers and history buffs, but his ideas live on, and they go far beyond obscure references in trippy action flicks.

In fact, Zhuangzi is credited with working out one of the most important economic concepts in the world: spontaneous order.

An authority no less than Murray Rothbard credits Zhuangzi (who Rothbard refers to as Chuang-tzu) as the first to puzzle out the idea, and he did it nearly 2,500 years before the Austrian school of economics made it a focal point of their economic and social theories.

First, it’s important to understand what spontaneous order is. The Liberty Fund describes spontaneous order as the idea that order “emerges as result of the voluntary activities of individuals and not one which is created by a government.”

Essentially it says that people don’t need to be coerced into creating a prosperous and harmonious society. It will happen naturally under the proper conditions, which primarily means conditions that allow people the freedom to do as they wish so long as they’re not harming or taking from others.

This description might sound familiar to readers of this publication, whose motto is “anything peaceful.” But what does it have to do with Ancient China?

Well, believe it or not, there was a robust libertarian intellectual tradition in Ancient China.

Zhuangzi was not the founder of the movement, however. The tradition, Rotbhard writes, started with Lao-Tzu (500 B.C.), a philosopher credited as the father of Taoism who rejected the alleged authoritarianism of Confucianism in favor of individual rights.

Lao-Tzu developed what Rothbard describes as “a radical libertarian creed,” one that said individual rights and happiness should be the primary objectives of a society. Lao-Tzu viewed governing bodies, with their “laws and regulations more numerous than the hairs of an ox,” as a naturally oppressive force to individuals, a force “more to be feared than fierce tigers.”

Zhuangzi followed in Lao-Tzu’s footsteps, and in his most famous work, The Zhuangzi, he shares what Rothbard says are the first historical traces of the idea of spontaneous order.

Chuang-tzu reiterated and embellished Lao-tzu’s devotion to laissez faire and opposition to state rule: “There has been such a thing as letting mankind alone; there has never been such a thing as governing mankind [with success].” In fact, the world simply “does not need governing; in fact it should not be governed.” Chuang-tzu was also the first to work out the idea of “spontaneous order,” developed particularly by Proudhon in the nineteenth and by F. A. Hayek of the Austrian School in the twentieth Century:

A perusing of The Zhuangzi shows that Zhuangzi’s conception of spontaneous order could not be more clear: “Good order results spontaneously when things are let alone.”

An entire chapter in Zhuangzi’s book is dedicated to “letting alone.” In the chapter, Zhuangzi writes that the natural conditions of human existence require “not artificial aids.” The philosopher touches on the evils of government, traces the failures of coercion in the province, and describes how action springs from inaction (government inaction).

Many tend to think of concepts such as limited government and spontaneous order as “Western” ideas, but this is hardly the case.

Zhuangzi’s reflections show they are universal. Two thousand years after Zhuangzi’s death, Adam Smith, in his work The Theory of Moral Sentiments, would refer to an “invisible hand” at work in free markets that works to the benefit of all. In that work, Smith explained how humanity’s affinity for systems and coercion interfere with the harmony of markets.

“The rich only select from the heap what is most precious and agreeable. They consume little more than the poor, and in spite of their natural selfishness and rapacity, though they mean only their own conveniency, though the sole end which they propose from the labours of all the thousands whom they employ, be the gratification of their own vain and insatiable desires, they divide with the poor the produce of all their improvements. They are led by an invisible hand to make nearly the same distribution of the necessaries of life, which would have been made, had the earth been divided into equal portions among all its inhabitants, and thus without intending it, without knowing it, advance the interest of the society, and afford means to the multiplication of the species.”

There’s no evidence (at least that I can find) that Smith read Zhuangzi. Yet they both observed the force of “spontaneous order,” a term that would eventually be coined by the Hungarian-British polymath Michael Polanyi in the essay, “The Growth of Thought in Society.”

When allowed to work, spontaneous order is one of the most powerful forces in the world. It’s the source of human prosperity, the engine for unprecedented human flourishing.

That’s powerful—even more powerful than bending a spoon with the mind.