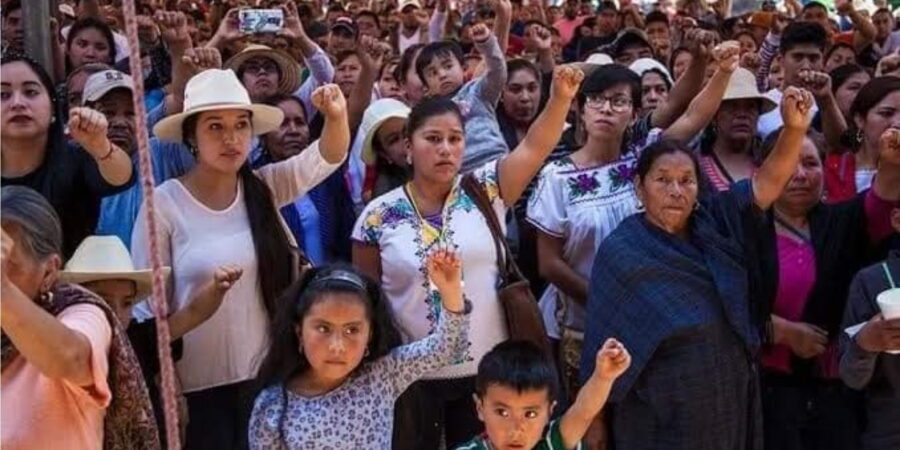 More than a dozen villages in Mexico recently voted to remove political parties from their communities in favor of managing their own resources.

On Sunday June 6th, midterm elections were held across Mexico, resulting in new governors and mayors. The “historic” election has been notable for the incidence of violence by organized crime, including the deaths of multiple candidates.

While most of the corporate media focused on the violence or the changing influence of some political parties, the election was historic for another reason: more than a dozen local bodies voted to abandon the political party system and begin handling their own legal affairs.

Infórmate Michoacán reported that “Sunday the Instituto Nacional Electoral (INE) was forced to suspend 89 electoral boxes in more than 20 villages in #Michoacán that… voted to expel political parties and manage resources on their own.”

INE is considered an autonomous, independent organization responsible for organizing the federal elections. Allegations of corruption and impartiality have plagued the INE since its inception in 1990.

Informate reported that the villages have voted to abandon the political party system and choose another form of governance. The move effectively cancelled elections in the following towns:

The communities are largely rural with indigenous populations, including 23 Purépecha, 10 Mazahua, and Otomí communities.

A couple days prior to the elections, members of the Otomi indigenous community burned political propaganda from all parties in protest of the elections and what they see as repression of students. The Otomi protest took place in Mexico City with the activists displaying their opposition to the electoral system.

In the days and weeks leading up to the mid-term elections, Infórmate Michoacán posted pictures and videos of various indigenous communities protesting against the elections. On May 22, IM noted that “the Purépecha community of # SanángelZurumucapio reaffirmed its total rejection of political parties.” The post notes that 100 percent of the votes were in favor of not allowing the political parties and elected officials to interfere with their affairs.

The Arantepacua community in the municipality of Nahuatzen, Michoacán was also reported to have burned a van from a delivery company that attempted to install voting boxes. “There will be no election in #Nahuatzen. Local commons have started lighting of campfires and installing barricades to prevent the INE from imposing community election rallies next Sunday,” Infórmate Michoacán wrote.

A report from La Voz de Michoacán states that Arantepacua ended up rejoining the electoral process with a “good influx of voters”. The report notes that the votes took place “despite the threat of a minority group of opponents, the self-styled Indigenous Citizen Council, which once again tried to ‘hijack’ the elections.”

La Voz also stated that in 2018 residents of Arantepacua voted in favor of rejecting self-government and chose the party system.

A History of Indigenous Resistance to Politics

The communities who voted to opt out of the political system in Mexico are not the first. As far back as the Zapatistas in early 1990’s, Mexico has had a history of indigenous communities rebelling and reclaiming their sovereignty. More specifically, the state of Michoacán has a history of resistance to political parties.

On April 15, 2011 residents of Cherán, Michoacán organized an armed resistance to fight off illegal logging and kidnapping in their community. The community kicked out politicians, police, and loggers accused of ties to the cartels overseeing the logging. The people of Cheran are part of an indigenous group known as the Purhépecha. Upon removing the influence of the politicians and cartel, the town voted to return to their system of governance based on Purhépecha traditions.

On April 15 of this year the people of Cherán celebrated ten years since their revolt against what they call “the narco government”. I recently traveled to Cherán and spoke with community members who were involved with the uprising.

While these communities fight for freedom – whether through self-governance or electoral politics – they are setting an example of what it looks like to challenge the status quo regarding how communities make decisions. Some communities will choose to stick with the familiar and continue playing the political game. Others will opt to reject parties and choose principles.

In the case of these Mexican towns their principles are cultural, largely based on their indigenous traditions. While this may seem like a foreign concept to those in the developed world, taking steps to contemplate whether or not the status quo is sufficient is something that would benefit people the world over. Now, more than ever, we need to rethink the way we relate to each other, governments, cartels, and other institutions of power.