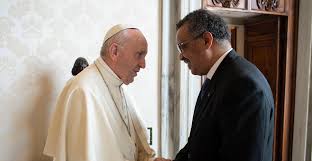 By Alice Salles on Mises.org

In Fratelli tutti, Pope Francis defines his vision of what an improved social order would look like, using theological elements, historical misconceptions,1 and political philosophy to create what has been dubbed his “quasi-humanitarian” manifesto. But in an attempt to swim with today’s political current, Francis pushes a “re-envisaging [of] the social role of property,” going against what previous popes have written and completely ignoring sound economic teachings.

As Dr. Samuel Gregg explained, Francis’s insensible treatment of economic questions has been an ever-present trait of his pontificate, making the claims in Fratelli tutti just a continuation of what Saint Peter’s 266th successor has written in previous papal documents. And it is with this reality in mind that we must approach his characterization of property rights.

In Fratelli tutti, Francis first claims that Christian thinkers understood that “if one person lacks what is necessary to live with dignity, it is because another person is detaining it.” In other words, those who are poor are such because someone else is holding the goods that all men require to live with dignity.

He then went on to echo Saint Pope John Paul II, saying that the “right to private property” was never considered “an absolute or inviolable right” in the Christian tradition. Instead, the church has always “stressed the social purpose of all forms of private property,” adding that the common use of created goods is the “first principle of the whole ethical and social order.”

Common good, he concludes, is “a natural and inherent right that takes priority over others,” a claim he links back to the Compendium of the Social Doctrine of the Church, a document published in 2004 based on documents written by Pope John Paul II. In today’s society, Francis then explained, “secondary rights displace primary and overriding rights, in practice making them irrelevant.”

When Francis claims property rights are secondary rights, he is referring to what Saint Thomas Aquinas wrote in the Secunda Secundae Partis of Summa Theologica.

Addressing those who questioned whether it was “natural” for man to possess things “as his own” when we consider that all things are God’s property, Aquinas wrote that the private possession of goods has practical and moral ends. He then added that the “community of goods is ascribed to the natural law,” whereas the “the division of possessions is not according to the natural law, but rather arose from human agreement which belongs to positive law.”

In other words, natural law in the Catholic tradition sees that men can commonly possess goods but never excludes individual possession.

“The ownership of possessions,” Aquinas continued, “is not contrary to the natural law, but an addition thereto devised by human reason.”

To Francis, this is the foundation of the idea that personal property rights are secondary to the communal ownership of goods. But is he right?

In Economic Thought Before Adam Smith, volume 1 of An Austrian Perspective on the History of Economic Thought, Murray Rothbard wrote that the right to property comes from man’s need to defend himself.

As noted by Rothbard, when private property rights are in place and a man can possess things as his own, the happiness of all men is maximized as a result.

It is the protection of property rights that secures the common good.

The very tradition of natural law we observe today is based on medieval and postmedieval Scholastic natural law, Rothbard noted. But it was the eighteenth-century Enlightenment version of natural law, in which “the individual’s rights of person and property [are] deeply embedded in a set of natural laws that had been worked out by the creator and were clearly discoverable in the light of human reason,” that helped us better understand what Aquinas wrote in the thirteenth century.

Despite being the Holy Father, Francis was never shy about his political leanings.

In Fratelli tutti, his love for the poor isn’t just described as a deep caring for those with less access to certain services and goods. Instead, he uses poverty as a means to advocate against free markets.

Ignoring the encyclicals of his predecessors such as Pope Leo XIII, who once wrote that socialists, “working on the poor man’s envy of the rich, are striving to do away with private property, and contend that individual possessions should become the common property of all, to be administered by the State or by municipal bodies,” Francis openly advocates against putting too much stock in one’s love for his or her own culture and nation, claiming that instead we should be looking at “a universal horizon,” a “global society” of sorts. In light of this, it is hard to see his claims regarding property rights as anything but an attack against the idea that communities can and should self-govern and that persons can and should have a right to own the fruits of their own labor.

As Pope Leo XII explained in Rerum Novarum, those who subscribe to socialist or related philosophies “[endeavor] to transfer the possessions of individuals to the community at large.” This, he added, “[strikes] at the interests of every wage-earner, since they [socialists] would deprive him of the liberty of disposing of his wages, and thereby of all hope and possibility of increasing his resources and of bettering his condition in life.”