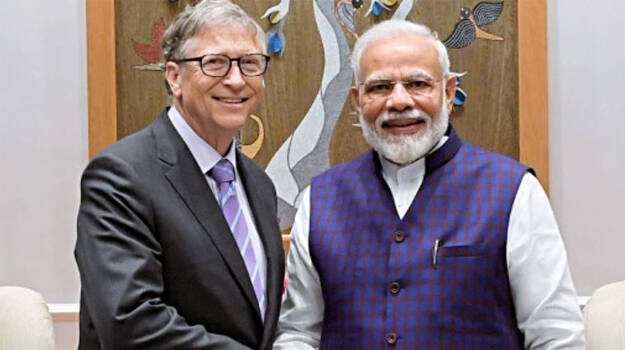 This is the man your “nationalist” government has donated USD 15 million to – see “India Funds Vaccine Cartel Accused Of 38 Million Premature Deaths Worldwide“.

If you don’t have time to read the full report below, consider this summary from the article “Who is Bill Gates?” :

The “Decade of Vaccines” kicked off with a Gates-funded $3.6 million observational study of HPV vaccines in India that, according to a government investigation, violated the human rights of the study participants with “gross violations” of consent and failed to properly report adverse events experienced by the vaccine recipients. After the deaths of seven girls involved in the trial were reported, a parliamentary investigation concluded that the Gates-funded Program for Appropriate Technology in Health (PATH), which ran the study, had been engaged in a scheme to help ensure “healthy markets” for GlaxoSmithKline and Merck, the manufacturers of the Gardasil and Cervarix vaccines that had been so generously donated for use in the trial:

“Had PATH been successful in getting the HPV vaccine included in the universal immunization program of the concerned countries, this would have generated windfall profit for the manufacturer(s) by way of automatic sale, year after year, without any promotional or marketing expenses. It is well known that once introduced into the immunization program it becomes politically impossible to stop any vaccination.”

Chandra M. Gulhati, editor of the influential Monthly Index of Medical Specialities, remarked that “[i]t is shocking to see how an American organization used surreptitious methods to establish itself in India,” and Samiran Nundy, editor emeritus of the National Medical Journal of India lamented that “[t]his is an obvious case where Indians were being used as guinea pigs.”

Throughout the decade, India’s concerns about the Bill and Melinda Gates Foundation and its corporate partners’ influence on the country’s national immunization programs grew. In 2016, the steering group of the country’s National Health Mission blasted the government for allowing the country’s National Technical Advisory Group on Immunisation—the primary body advising the government on all vaccination-related matters—to be effectively purchased by the Gates Foundation.

As one steering group member noted: “The NTAGI secretariat has been moved out of the [government’s health] ministry to the office of Public Health Foundation of India and the 32 staff members in that secretariat draw their salaries from the BMGF. There is a clear conflict of interest—on one hand, the BMGF funds the secretariat that is the highest decision making body in vaccines and, on the other, it partners the pharma industry in GAVI. This is unacceptable.”

See the Documentary on Bill Gates Which Exposes His Connection to Nilekani, Aadhaar and Demonetisation