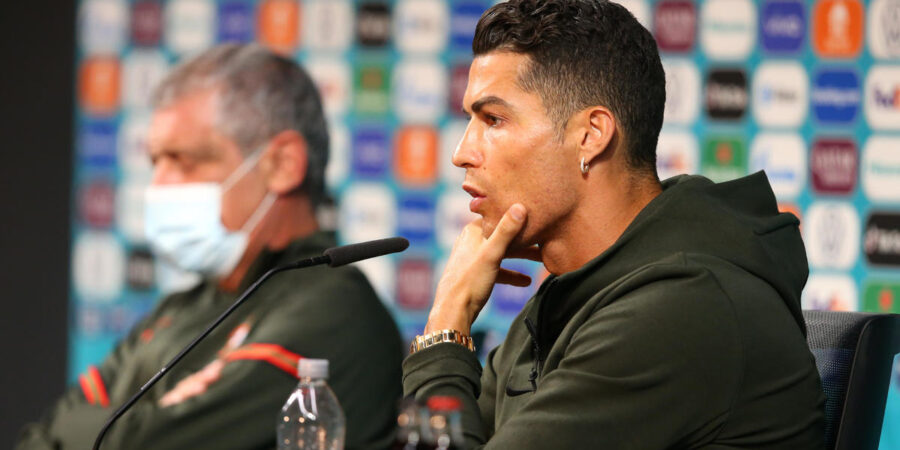 By Steve Watson on Infowars.com

Football star Cristiano Ronaldo’s public rejection of Coca-cola this week has prompted health campaigners to call for other sports stars to step up and ditch junk food and drink sponsors.

As highlighted in the video below, Coke is massively unhealthy, and its presence as a sponsor of the Euro 2020 tournament is akin to a tobacco company plastering its logos all over the Olympics.

The London Telegraph reports that Ronaldo’s small action, along with other players such as Italy’s Manuel Locatelli has shone a spotlight on those who are still endorsing Coke and other junk products.

It’s also particularly hypocritical of Rashford, because he simultaneously campaigns for healthy eating:

Even Ronaldo himself starred in Coke advertisements when he was younger, and presumably more controllable and less aware.

Caroline Cerny of the Obesity Health Alliance, a coalition of more than 40 major health organisations, said: “Ronaldo’s defiant stance against being associated with a sugary drink could mark a turning point and we hope other sports stars will similarly refuse to be used as walking adverts for junk food and other unhealthy products. It’s time to break the link between unhealthy brands and sports sponsorship so children are not exposed to a flood of marketing when they watch or play their favourite sports.”

Dr James Davies MP, a member of the Health and Social Care select committee and a vice-chair of the All-Party Parliamentary Group on Obesity, said: “It’s refreshing to see key figures in sport highlighting the need for healthier lifestyles.”

Coca Cola brags on its own website about how “Sport & Entertainment partnerships are part of the DNA of The Coca-Cola Company”:

It is literally the longest standing sponsor of the Olympic Games, dating back to 1928.

The question is, why when its fucking poison is one of the biggest contributors to worldwide obesity, type 2 diabetes, heart disease, kidney diseases, non-alcoholic liver disease, tooth decay and cavities, and gout.

After the Coke snub, maybe some sports stars could address Nike and other sports brands who make millions from sponsorship exposure yet still use forced labor to manufacture their products.

Like parasites, these massive multinational companies will latch onto anything successful to push their junk on the world. They also do it particularly insidiously by promoting a fictional world, falsely suggesting the cream of sports talent love their products, while the reality behind it all is that they’re being bought off or even duped into selling pure shit to young people who idolise them in exchange for cold hard corporate cash.