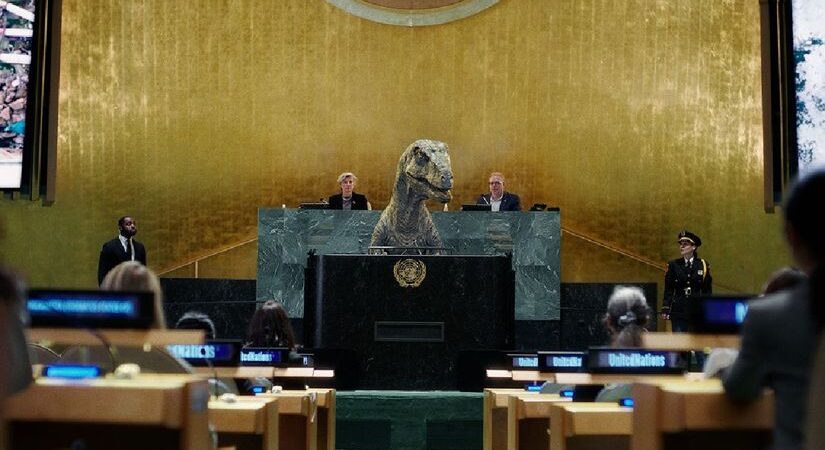 The UN has produced a humorous video with Frankie the Dinosaur using ecology for ideological purposes, without contributing anything to the ecological debate. Ecology and global poverty are serious topics that deserve better than that.

This program wants to teach the world’s polluters a lesson and show them the way forward. The 2.5-minute video posted a week ago is set in the iconic General Assembly Hall at United Nations Headquarters in New York.

FRANKIE THE DINOSAUR: A DISASTER FILM

The foreground shows a helicopter view of the famous building. No doubts about the resources employed – the clumsiness of the producers led to the addition of the noise of the helicopter, thus admitting the CO2 emissions necessary for this filming.

An electric drone would have avoided these releases and enabled more modern images to be obtained. But this is just a small detail, (and ILR : one couldn’t expect that from the bureaucrats at the UN).

Another detail, the images show a building undergoing renovation of the UN Building.

This was completed in 2013, for more than $ 2 BILLION (ILR Note : talk about wasting money !). For the anecdote: the ceilings of the assembly hall were covered with the brownish deposit of cigarette and cigar smoke which ended only recently despite the ban on smoking in administrative buildings in New York in 2003. But the headquarters of the United Nations is in international territory, which made it possible to free itself from the laws of the country which ceded 7 hectares to it in the middle of Manhattan.

ILR Note : see this video from around the time of the renovation :

As the delegates take their seats in the great hall, some masked, others unmasked, heavy footsteps are heard from the end of an illuminated corridor like a Third Kind encounter, all to the background of disturbing music.

A Tyrannosaurus Rex enters the compound, screams from panicked women. The dinosaur walks up the aisle to the podium and now faces the black security guard. Apparently the lessons of diversity were not learned by the writers. Until then, we stay in the good old clichés of the horror film of the nineties, very well made, it must also be recognized.

The mouth of the bipedal tyrant is now within a yard of the petrified security guard, eyes wide open. The scary music stops dead, the monster exhales and speaks to him in perfect English. Almost mockingly, he politely asks her if all is well and if he can speak. This is also very well done.

The saurischian is now at the top of the podium.

He adjusts the microphone to address the representatives of the States. He will tell them about the possible extinction of humanity as a result of global warming.

It should be noted here that in order to address an existential subject, it was chosen to do so in front of the representatives of the States at the United Nations. These people are not elected, have no executive powers (it is the Security Council which has executive power within the United Nations), no legislative powers, and no judicial power (it is the Tribunal International Criminal which plays this role). In fact, they don’t decide anything, they represent their states, hence their name as ambassadors to the United Nations. This video surfs on the myth of the world government which would be embodied by the United Nations General Assembly which would decide the course of the world. There too, there is something very dated about this ambition.

The giant reptile begins its speech with an authoritative argument: “I know a thing or two about extinction”.

The comic effect is successful, we wait for the continuation. The theropod calls out to the assembly, “Going extinct is a bad thing”.

There we think we are dreaming, it is as if a furry man from 1914 came back to tell us that war is bad.

But here, the medium is rather modern, it is to use infantilization as a means of communication. This can be seen in marketing in the field of technology, where to avoid possible complexity requiring intellectual effort, graphic representations are infantilized using stylized drawings for 8-year-old children. In the business world, gamification is a trend. The principle is to transform effort into play. Naming and making animals speak is also infantilization. By the way, the dinosaur’s name is Frankie.

The extinction suffered at the end of the Mesozoic was not the fault of the victims. There was this unfortunate meteorite, whereas we humans spend hundreds of billions every year to pollute our atmosphere until we are threatened with extinction. And I remind you that extinction is not good.

The first part is true. No one is to blame for the arrival of this meteorite on Earth, but we must also recognize that without it, the dinosaurs would not have made room for us. This meteorite can therefore be considered as an event of creative destruction. By way of provocation, why not imagine the current situation from the same angle?

On the other hand, the second part does not hold. If we burn fossil fuels, it is not without reason. It is the very heart of modern civilization. Fossil fuels account for 80% of our energy costs. And since there is no good or service that does not require energy and fossil fuels have not yet been replaced, this means that cutting fossil fuels today would lead to an 80% reduction in to almost everything: heating, housing construction, transport of goods and people, food, education, maintenance of infrastructure, drugs, hospitals, etc.

In short, such a reduction would lead to the immediate collapse of our civilization. Tyrannosaurs may not know it, but the representatives of the states that will rise at the end to applaud should know, right?

Let’s continue to listen to the lesson of the terrible lizard.

SOME PROPAGANDA FROM THE UN

The dinosaur will now teach us what’s the best thing to do with the hundreds of billions of dollars spent stupidly to support and advance humanity. Music full of emphasis is more present. The reptile asks us to help the most needy in this world because we must not choose extinction. We need to stop making excuses and change. The music climaxes, one after another the representatives rise to a triumphant ovation. Curtain, the ecological mass is over.

As this video is produced by the United Nations Development Program, it is legitimate for them to preach for their parish. But it is controversial why the subject of ecology is instrumentalized, especially since the ecological aspect of their program is not obvious.

Taken from their website, here are some of the actions they are calling for:

It is about investment, development and economic growth. Even if the qualification of sustainable is never far off, this remains wishful thinking because with less than 80% fossil fuel, we do not yet know how to do it.

No miracle : aid to developing countries will require huge amounts of energy if we see it as a transformation towards the Western model, therefore highly carbon-intensive. Whether reducing our dependence on fossil fuels is a necessity because of the environmental consequences and because the reduction in production has already started, that is the real debate.

It is nevertheless interesting to see a UN institution ridiculing its own members by showing them being convinced on two subjects as complex and sad as ecology and poverty in the world in one minute and twenty seconds of a speech given by Frankie the dinosaur.