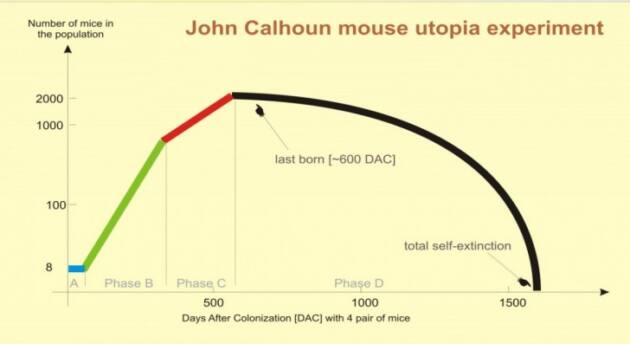 The Foundation for Education (FEE) recently published a fascinating article about John B. Calhoun’s famed “mouse utopia experiment,” in which mice were given a kind of rodent welfare state that provided every need in unlimited supply — food, nesting quarters, even medical care. He then simply observed what happened over a long period of time.

“At first, the mice did well. Their numbers doubled every 55 days. But after 600 days, with enough space to accommodate as many as another 1,600 rodents, the population peaked at 2,200 and began to decline precipitously—straight down to the extinction of the entire colony—in spite of their material needs being met with no effort required on the part of any mouse. The turning point in this mouse utopia, Calhoun observed, occurred on Day 315 when the first signs appeared of a breakdown in social norms and structure. Aberrations included the following: females abandoning their young; males no longer defending their territory; and both sexes becoming more violent and aggressive. Deviant behavior, sexual and social, mounted with each passing day. The last thousand mice to be born tended to avoid stressful activity and focused their attention increasingly on themselves.” Does any of this sound familiar?

At the time, the failure of the mouse utopia was attributed simply to overpopulation, a bugaboo of the 1960s that social scientists thought needed to be addressed with radical measures. But after decades of experience with modern welfare states — and oddly parallel experience among humans  — some are looking at this rather as the ultimate proof that animals, including humans, have not just physical needs but a need for challenge, work, and meaning…all of which the welfare state kills.

There is a good documentary on this, Work & Happiness: The Human Cost Of Welfare.