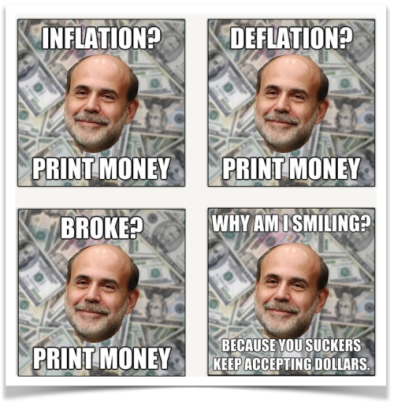 Even though from the American point of view, in this thread Ted Rogers breaks down with clarity why monetary policy and Cantillon effect are the reasons for the wealth gap, why socialism makes it worse and how sound money solves this.

1/ The gap between the “rich” and the ‘non-rich’ has nothing to do with taxes and everything to do with monetary policy. This is critical to understand, especially with presidential candidates calling for socialist policies in the U.S. #bitcoin

2/ In the past 10 yrs the Fed has flooded the market with dollars. The amount of US dollars in circulation has doubled in the past decade. DOUBLED.

3/ The idea is to spur economic activity and, yes, banks loan some money to businesses that invest in growth, job creation, etc But there is limited supply of good businesses needing loans. Much of the money ends up invested in asset classes like real estate, equities, PE/VC etc.

5/ So the rich get richer. No, the poor don’t get poorer in the absolute sense, they just don’t get richer, at least not at the pace of wealthy holders of inflated assets.

7/ Economic illiterates want to attack the wealthy for ‘hoarding’, exploitation, etc. No, they simply do what’s done when the Fed is printing tons of money and interest rates are low – when money is “easy” and cheap – they are taking it and investing in various asset classes.

8/ This drives the value of those assets higher, which makes the rich richer (on paper). On the other hand, asset bubbles don’t last forever. in a correction, holders of inflated assets suffer greater drop in wealth. but they also stop investing in new biz, hiring etc so non-rich also suffer.

9/ In sum, it’s not about confiscating the assets of “billionaires” or some other class of citizens – that is not only criminally statist, it has bad unintended consequences for the less wealthy in our society. Less risk-taking by wealthy, less new biz, less jobs, less hiring.

10/ The key to reducing wealth inequality, in the long run, is getting back to sound money.

#Bitcoin is the hardest money available to human beings.

11/ I have no clear idea on how we get from here to monetary policy based on hard money. Hopefully it can happen without an economic collapse of some sort. You can’t violate natural laws forever, however, eventually the price of everything is pulled towards its true market value

10/ I do know what to do on an individual level. I HODL #bitcoin (BTC). Perhaps holding gold is also reasonable, since BTC is not yet widely understood as a safe-haven asset.

11/ But even if gold might do well in the interim, I have a hard time holding any asset that is on its way to being completely replaced in the next 10 years, as gold will be by #BTC.

12/ picking a trend is one thing. Picking the timing of that trend is another. I don’t know the timing of #bitcoin ubiquity – but I feel certain about its arrival and the fact that humans will come to value it as the ultimate sound money. 13/ It’s bad to be political on twitter since 50% of the audience will hate you but one final – political – point. Does anyone believe that @BernieSanders or @ewarren or anyone on the left cares about hard money?

Of course they don’t.

14/ If the left gets sufficient power, they will double down on easy money via MMT or the equivalent, then exploit the wealth gap they are creating to justify MORE GOVT INTERVENTION.

This is one way countries become socialist and are ultimately destroyed.

15/ In the end, as individuals we only control our own actions. “Be the change you wish to see in the world.”