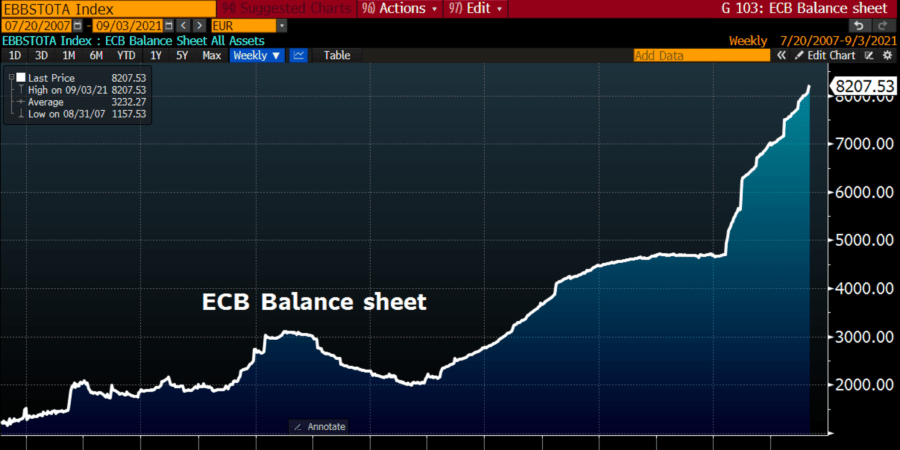 By Philippe Herlin on Goldbroker.com

Prices in the eurozone are seriously starting to rise, with industrial producer prices in Germany reaching 18.4% in one year, a record since 1951! As a leading indicator of consumer prices, inflation is bound to continue rising in Europe’s largest economy. But is the European Central Bank (ECB) even aware of the problem? Not at all, judging by its latest statements, which is more than a little worrying.

Is the ECB recommending that countries with budget deficits return to equilibrium so that it can slow down its money printing, i.e. the creation of excess money, the primary source of inflation in the eurozone? Is it requiring European banks to strengthen their capital base to cope with price volatility? No, it is asking financial institutions to accelerate on the climate. Of the 112 banks supervised, it explains, “none is close to meeting all prudential expectations”. Prudential in the sense of “climate and environmental risks”, not in the sense of the weight of debts or low profitability… Really, is there nothing more urgent?

The ECB doesn’t even seem to understand what’s happening to it: it’s worried about soaring house prices in the EU, which it notes, prices have never risen so fast in sixteen years. But where is this bubble coming from if not from its money printing press?

The ECB’s balance sheet has exploded by more than 3 trillion euros since the Covid crisis, money created by a magic wand, by pressing a few keys on a computer keyboard. The subprime crisis of 2008, which was so impressive at the time, looks ridiculous next to it. The Greek debt crisis in 2011 is a little more noticeable, while the steady increase over the period from 2015 to 2017 indicates a banking sector short of liquidity. The total of its balance sheet is equivalent to 81% of Eurozone’s GDP, against 37% for the Fed, 41% for the Bank of England, only the Bank of Japan doing worse (134%) but the debt is held entirely internally, which changes the game. The staggering rise we are experiencing is not about to stop, given that budget deficits in France and in the countries of Southern Europe remain high and are barely being reduced…

If inflation persists and interest rates rise, the whole edifice of debt in Europe risks collapsing, and the central bank will be called to account. Faced with these risks, isn’t the ECB looking for scapegoats in order to avoid its responsibility, which is nonetheless decisive? This is what we understand when it states, in the latest issue of its Financial Stability Review, that the “low vaccination rates in some parts of the world and growing vulnerabilities in major emerging market economies, notably the strains experienced by major property developers in China, also add to risks.” Thus, “the pandemic continues to be one of the main risks to economic growth going forward” and “risks stemming from the pandemic have not disappeared entirely, not least because vaccination progress has remained slow in many areas of the world.” So there you have it, the unvaccinated named as responsible for the crisis, should it occur soon, how convenient is that?

The ECB is making a mockery of the world: it is shirking its responsibilities (printing money, zero interest rate), it is being lax with the banking system (insufficient capital), it refuses to recognize the damage it is causing (bubbles in equities, bonds and real estate), it refrains from lecturing governments with chronic deficits (France, Southern Europe), it is displaying objectives that are not within its direct competence (climate), and it is designating scapegoats in the event of a crash! Signs of loss of control and the beginning of panic.