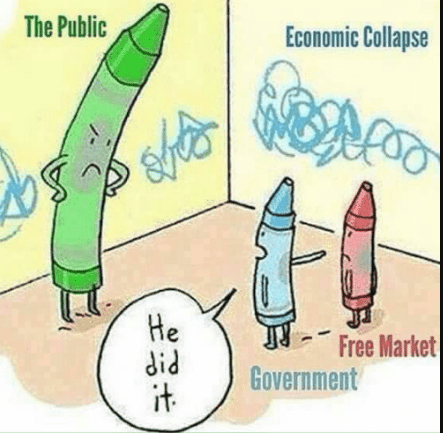 By Elie Blanc on Contrepoints.org (with ILR Edits)

Any high school student studying economics must learn the definition by heart: an externality is a “positive or negative consequence of the economic action of an agent that is not accompanied by financial compensation”. The example generally given is that of a factory that releases pollution to produce its goods.

According to this vision of economics, externalities are a form of “market failure”, that is to say situations for which the intervention of the State (generally by the implementation of a tax) is absolutely essential to get closer to the “common good” (or the Pareto optimum in economics). This reasoning, which may seem logical at first glance, is actually based on very questionable foundations and runs the risk of justifying all forms of state intervention.

The very idea that any economic activity has a universally and unmistakably positive or negative consequence is already problematic. If you decide to set up a beehive in your garden, bees are just as likely to disturb your neighbors during their barbecues as they are to benefit the nearest orchard by pollinating fruit trees.

The same activity may therefore very well be the source of both positive and negative externalities. And even for cases that may appear to be universally harmful, such as pollution, the extent of the damage is highly subjective. The young college student who suffers from a respiratory pathology will have a much greater aversion to air pollution than the old man who does not care about the long-term consequences of pollution on his health.

In order to assess the amount of the damage, and consequently that of the tax, it would therefore be necessary to succeed in measuring and adding up all these individual losses, which is obviously impossible. It should be noted in passing that even if this were possible, that would not therefore legitimize the introduction of a tax, as the money collected by the tax will not be redistributed according to the level of the damage suffered to those who bear the damage. Instead, the money will be spent by the state.

But beyond these technical considerations, the danger of the concept of externalities lies above all in its application to more and more areas of economic and daily life.

Indeed, with such a broad definition, almost anything can be considered as an activity generating externalities, since it is in fact very rare that a human activity does not have any consequences on others. For example, something as mundane as the decision to leave a social network causes a negative externality for other users of the social network, since the social network is only as interesting as the number of people who use it.

Should we nonetheless tax the people who make this choice of leaving the social network?

In its desire to internalize externalities, the state therefore faces the following dilemma:

– either it decides to correct only certain externalities (generally according to political considerations), and it therefore exercises its power in a perfectly arbitrary manner;

– or it seeks to correct absolutely all externalities, in which case it must resolve to adopt totalitarian methods, starting with generalized surveillance of citizens and a complete control of the economy.

The desire to fight against externalities also risks triggering a self-sustaining process, since the solutions proposed by the state very often entail new externalities that should logically be corrected again.

For example, when the state decides to subsidize wind energy for its alleged positive environmental externalities, it favors the establishment of wind farms which in turn cause a number of negative externalities, such as noise, the deterioration of the landscape or the death of birds.

The fight against externalities is therefore a headlong rush that can only lead to complete state control over the economy if it is applied consistently, because the state is constantly looking for remedies for the ills it has itself caused.

Unfortunately, in France, this growing power of the State is set up all the more easily as our country chooses to limit individual responsibility as much as possible in favor of the collectivization of risks, which multiplies the cases of possible externalities and the justifications for citizen control.

For example, if I decide to spend Saturdays watching TV rather than going for a run, I statistically increase my risk of heart disease, which others will pay for through their Social Security contributions.

Likewise, if I choose to take training with poor job prospects, I increase the likelihood of unemployment in the future, which will be mainly funded by other workers.

Should we limit the choice of studies and monitor the diet of citizens, or even impose diets, all in the name of fighting negative externalities on the health system or on unemployment insurance?

The prospect seems dystopian, and yet it is this type of reasoning that has led us to the current situation with covid.

Indeed, the whole argument in favor of the establishment of “vaccine passports” and restrictions on freedom, particularly with regard to the unvaccinated, is implicitly based on this notion of negative externalities.

We are thus told that the unvaccinated will not really bear the costs of their decision to not vaccinate, that they would be more likely to infect others or that they would endanger the health system, and that it is therefore legitimate to limit their freedom.

In a very French schizophrenia, individuals were therefore relieved of their responsibility by a public and compulsory insurance system, before they are designated as being guilty of the externalities they would exert on this same system – which they don’t even have the choice to leave !

This sad epidemic episode will at least have the merit of illustrating that any attempt to zealously control externalities cannot be carried out without maintaining a high level of control and surveillance by citizens.

To get out of this straitjacket, we must absolutely abolish all compulsory public insurance systems (starting with Social Security and pensions), and let the French opt for private insurance, which would make everyone is truly responsible for their own choices.

As for other externalities, we have to trust the market. As Ronald Coase has shown, problems of externalities disappear when property rights are properly allocated and individuals are allowed to exchange them freely (strictly speaking, it should be remembered that Coase assumes low transaction costs. ILR Note: But see Rothbard here, who has a different approach to this). If this is not the path that is followed, we must expect ever more liberticidal measures in ever more areas of daily life.