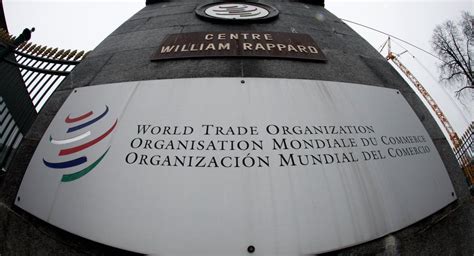 By Ryan McMaken on the Mises Wire

The World Trade Organization (WTO) is in a state of crisis. Despite grandiose dreams of a global trade organization that would enforce global bureaucrats’ broad vision for multilateral trade agreements, the world looks more and more like it neither wants nor needs an organization like the WTO.

CNBC reports this week that the WTO is in “a reform-or-die moment,” as both the US and Chinese governments appear uninterested in taking orders from the WTO.

It once seemed like the World Trade Organization (WTO) was a very big deal. When it was formed in the 1990s, scores of states—rich and poor, large and small—gathered to put together “rules” for how the sovereign states of the world would interact on trade. As Razeem Sally has noted, however, multilateral agreements were not what made global liberalization happen:

since the 1980s there has been a veritable trade-policy revolution outside the West, with region after region shifting from protection and isolation to freer trade and global economic integration. Observers often forget that this has come more “from below” than “from above.”

Share of Total Tariff Reduction, by Type of Liberalization, 1983–2003, by Percentage:

Moreover, during the heady days of the 1990s, when the weaker General Agreement on Tariffs and Trade​ (GATT) gave way to the stronger WTO, it was assumed trade would be regularized and mandated worldwide through multilateral action. But although international trade did indeed increase over this period, it remains unclear that the WTO was the cause.

Doubts about the WTO had already surfaced nearly twenty years ago. For example, economist Andrew Rose in 2002 concluded, “An extensive search reveals little evidence that countries joining or belonging to the GATT/WTO have different trade patterns than outsiders.”

Despite my use of over sixty measures of trade policy, I have been unable to find convincing evidence that membership in the multilateral trade system is associated with more liberal trade policy.

So, if the WTO isn’t driving global trade, what is?

Well, it could be any number of things. As Rose notes:

Why has trade grown faster than income, if not because of the GATT/WTO? Who knows? But there are plenty of other candidates. Higher rates of productivity in tradables, falling transport costs, regional trade associations, converging tastes, the shift from primary products towards manufacturing and services, growing international liquidity, and changing endowments are all possibilities.

First, productivity growth in the tradable goods sector has caused a fall in the relative price of such goods, and so increased trade. Second, tariff rates have fallen in most major economies, reducing the cost of international trade and increasing the returns to specialisation.

Factors other than tariffs dominate, however.  The authors contend that a drop in tariffs was responsible for only 21 percent of “the increase in the trade to total final expenditure ratio” from 1980 to 2000.

But even if cuts in tariffs were the overwhelming force behind growing trade, we still couldn’t assume that this was attributable to the WTO or its predecessor, GATT.

Indeed, we have little reason to thank the WTO for what liberalization has come about in the past twenty years. The the so-called Doha Round—which was the successor agreement to the the Uruguay Round and attempted to expand the WTO’s mandate—is now regarded as a failure by supporters’ standards:

“The WTO hasn’t produced any big achievements since 1994, when the Uruguay Round closed, and has progressively lost its attractiveness,” Fredrik Erixon, an international trade expert at the Brussels-based think tank ECIPE, told CNBC via email.

“All in all, WTO has not managed to make the multilateral trade framework move ahead since it was established more than 20 years ago,” economist Jean-Pierre Cling observed in 2014. This is due to a wide gulf between the ambitions of the WTO and “the new power relationship prevailing in the world economy, with new emerging powers (China, India, etc.).”

Moreover, the lion’s share of liberalization in China took place before it entered the WTO:

By the time China entered the World Trade Organization in 2001 the import regime had been almost entirely transformed….the average statutory tariff, which stood at the relatively high level of 56 percent in 1982, was reduced to 15 percent by 2001. The share of all imports subject to licensing requirements fell from a peak of 46 percent in the late 1980s to fewer than 4 percent of all commodities by the time China entered the WTO.

Since then, there are growing signs that the world’s states are hitting the brakes on trade liberalization. That’s a bad thing, because it increases consumers’ cost of living. But it’s especially a blow to entrepreneurs and small business owners who depend on access to affordable inputs for the goods and services they produce. Put another way: trade barriers often hit the productive classes the most.

But just as the liberalization we saw during the late 1980s and the 1990s was primarily a product of unilateral action, the growing turn toward protectionism is a result of domestic politics. And now the process is going in reverse:

What no one recognizes is that the common reason for the breakdown of world economic relations is the combination of interventionist domestic policies and government-led, top-down, faulty trade integration, which serves only interest groups and is subject to perverse incentives. The positive effects of inter-governmental multilateral trade agreements are minor at best. Their negative effects, however, such as stifling global trade, diversion of trade flows, or increasing red tape, have been growing at an alarming rate.

The WTO was not the reason world trade was liberalized during the 1980s and 1990s. Thus, it is unnecessary. And now, even if such a thing were desirable, the WTO is in no position to force liberalization on countries like the US, China, or India. Thus, the WTO is also irrelevant.

The time has come to move on. Trade liberalization is an excellent thing. Countries that do it have been often been shown to have higher incomes and to be resilient. If anything, the WTO is now becoming a tool for large states to drive harder bargains with the rest of the world. That’s a step in the wrong direction, and we’d be better off in a world of bilateral agreements and unilaterally liberalized trade.