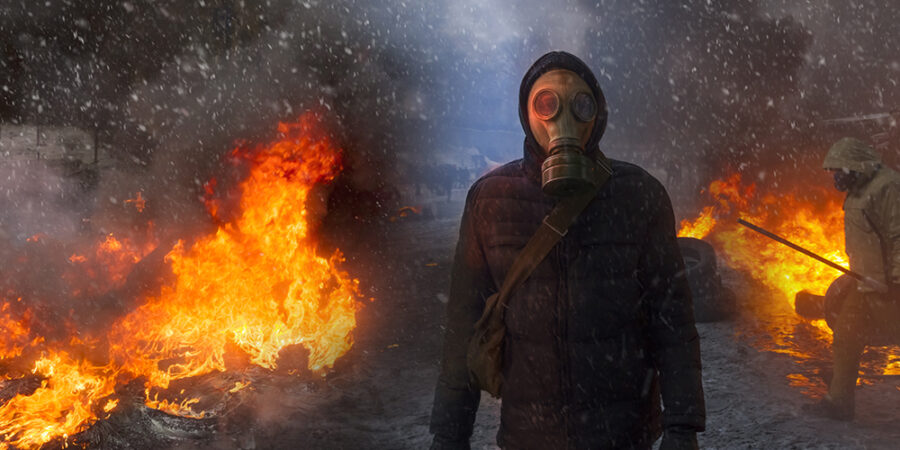 By Jeffrey Overall on Mises.org

On the heels of the covid-19 pandemic, unprecedented socioeconomic challenges have emerged on a global scale, including growing resentment toward: government-enforced lockdowns, government corruption, inequality, and climate change. In the United States alone, the economic costs of the pandemic have been estimated at $16 trillion. With international socioeconomic systems in flux, policy makers, economists, and forecasters are left puzzled on what is going to happen next. In this article, I provide three predictions for 2021.

Over the past decade, there has been more social unrest and political uprisings than ever before. In 2019, there were protests in over 110 countries that were tied to: inequality (through the #metoo and black lives matter (BLM) movements), climate change, and the further encroachment of the state into the lives of citizens, which occurred in Hong Kong. In 2020, mass antigovernment protests have emerged throughout North America and Western Europe involving police brutality against racialized communities and government-enforced lockdowns. However, since the increase in government-enforced lockdowns, these movements of discontent have been suppressed, which is worrisome because as Sigmund Freud famously argued, “unexpressed emotions will never die. They are buried alive and they will come forth later in uglier ways.” Indeed, unexpressed emotions fester and as we saw with the storming of Capital Hill, eventually come out, often in more extreme ways.

Prediction #1: 2021 will be the year of the revolution

Heavy-handed covid-19 government-enforced lockdowns will be matched with social unrest of greater magnitude until a G20 government is overthrown. With the greatest fear of any state being social unrest, governments across the globe have strict measures in place to suppress social unrest and protect their authority. In China, for example, the Financial Times reported that the Communist Party of China (CPC) censors the media and polices protests strategically. Similar approaches, to varying degrees, including mass government surveillance, have been and are continuing to be used in other countries. In the United States, the magnitude of the invasion of privacy rights was exemplified by the governmental surveillance that became apparent from the whistle-blowing activities of Edward Snowden, the former National Security Agency (NSA) analyst, in 2013. In the Snowden documentation, the instances of mass surveillance being conducted by the US government was not only localized within the US, but also abroad involving foreign nationals and governments. Consistent with these privacy concerns, governments across the globe are releasing digital contact tracing technologies (in the form of mobile apps) to not only monitor the movements of citizens, but also to extract their mobile phone data. The New York Times has reported that several regimes are taking this opportunity to seize new powers that have little to do with the pandemic and without the likelihood of relinquishing them after it is resolved. To address the possibility of oppression, UN human rights experts have warned governments not to exploit emergency pandemic measures to erode the human rights of their citizens. As a result of these issues, trust in the government is at an all-time low and since the pandemic emerged, almost everyone that you speak with has a theory of what they think is “really going on.”

Prediction #2: A high-level government official to reveal additional information about the pandemic leading to a formal accusation against a foreign government

To restore trust, it is expected that a high-level whistle-blower from a G20 government, similar to the Snowden case, will be used to provide “evidence” that a foreign state manufactured the virus in an act of biochemical war.1 Biochemical warfare is not a new phenomenon. It has been used by British colonialists when they gave the indigenous people of Canada blankets infected with smallpox. This act caused many deaths in a localized epidemic.

With the international collusion that occurred during the 2016 US presidential election, the US government is sensitive to foreign entities interfering in its affairs. At the end of 2019, two years after the US-China trade war began, covid-19 emerged out of China and spread throughout the globe causing mass socioeconomic devastation. Although there has been anti-China propaganda for nearly twenty years 0151due, in part, to the transference of manufacturing employment from industrialized nations to China and, now, the active trade war—the US president suggested that China manufactured the virus. In August 2020, Forbes published an interview with Dr. Mark Kortepeter, a physician and biodefense expert for the US Army where he concluded that covid-19 “has some “desirable” properties as a bioweapon, but probably not enough to make it a good choice for military purposes.”

This formal accusation will likely trigger an “us versus them” mentality in the United States, centered on stimulating nationalism and reducing social unrest. This approach has been used by the US government for nearly a century. Specifically, the US government has consistently portrayed an “enemy figure” that citizens need to fear and be protected against. In the twentieth century, enemies were the: Germans, Russians, Communists, Japanese, and Middle Easterners. In the early part of the twenty-first century, citizens were programed to fear Islamic terrorists. In these instances, the government is positioned as the only protector of citizens against foreign enemies.

Although it is expected that China will deny these accusations, there are four possible motivations for using covid-19 as a biochemical weapon:

A. Retaliation for the US-China trade war, which caused the Chinese economy to slow to its lowest level in three decades while industrial output fell to a seventeen-year low. This is of strategic significance to the Chinese regime as it has predicted that a significant economic slowdown could be a potential cause of social unrest. Much to the chagrin of Beijing, there was mass social unrest throughout Hong Kong from 2019 to 2020, causing the regime significant domestic and international challenges that persist today.

B. Retaliation for the support given by the US government to the: Hong Kong protest movement, rights of the Tibetan people, and international rights of Taiwan. All three locations are of strategic importance to Beijing.

C. The pandemic has caused economic devastation and mass social unrest in the US. Depending on the magnitude, this has the potential to cause the US government to redeploy portions of their military from key international areas, like the South China Sea, which is of utmost strategic importance to China, to domestic locations. Consistent with this prediction, to counter the Capital Hill riots of 2021, the US government summoned the support of the National Guard.

D. In recent years, Beijing has focused resources on shifting their economy from manufacturing to service based. With the pandemic forcing service-based employees to work remotely, we are seeing a surge in digital nomads and remote workers. This has created an international labor market whereby organizations are able to hire international employees and allow them to work remotely from anywhere in the world. Like the transference of manufacturing employment from North America and Western Europe to China that began 20 years ago, there are significant cost savings available to organizations that begin recruiting their managerial and staff positions from the international labor market and, in particular, China.

As we saw with the Hong Kong protests, people who have nothing to lose are more willing to revolt. With this in mind, to appease the population, curb social unrest, and restore trust in government, a universal basic income will be announced this year. By doing this, citizens would become increasingly reliant on the government for monetary support and, as a result of this dependence, less willing to revolt.