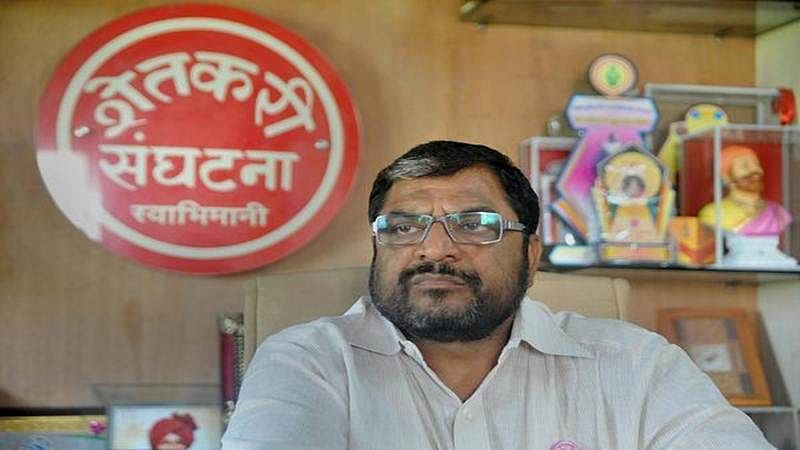 Shetkari Sansthna (SS) was founded in 1979 in the heyday of Janata party regime by Shri Sharad Joshi (SJ), a UN returned econometrics-scholar-turned-farmer experimenting in farm economics on ground, near Pune.

The full prescription on the basis of the SJ doctrine, can be briefly stated as follows.

1) Allowing an economic drift and shift of families subsisting on fragments of farms to other sectors, and reducing the burden on the farm sector.

3) Inviting private investment in the farm sector by improving infrastructure and legislative environment for ease of doing business.

4) Declaring all farm loans as null and void, on the background of chronic negative subsidy through various statist mechanisms.

(a) Maximum Land Holding Act, Tenancy Act, Land Transfer Act etc. which restrain farmers from entering into contract with other parties and accomplishing the real benefits even from the newly introduced contract farming laws and also from expanding the land area for enhancing the scale of farm operations essentially to economies operational cost by using technologies and machinery.

7) Undoing the regime of alleged farm -subsidies that actually end up in the hands of नेता तस्कर गुुंडा अफसर (SJ’s phrase for the nexus) and manufacturers of farm-inputs, and allow the farmers to make choices of crops, discover best price for their produce, and negotiate for better returns.

8) Facilitating farm exports as per WTO framework so that Indian farmers can benefit from comparative advantage over other countries and develop better and cheaper goods.

9) The MSP and procurement regime, now operates mainly for Wheat-paddy and sugarcane (FRP) and cotton to some extent. This has ‘fixed’ the prices of these commodities to unrealistic levels-low for many years, (through now higher than International prices, causing distortions in trade). MSP is a relic of the planned economy era, and must be effectively and gradually phased out. FCI is guzzling large subsidies and is already unsustainable.

10) For poor families, GOI can transfer food security subsidies by direct bank transfers on a monthly basis so that they don’t have to depend upon ration shops. For better food security with nutrition, coarse grains, pulses and oils can also be considered as important additions to the FS basket. This will avert the dangers of rising burden diabetes, hypertension, obesity etc and improve protein content of daily diets of families served.

Position on the three laws

(A) THE FARMERS’ PRODUCE TRADE AND COMMERCE (PROMOTION AND FACILITATION) ACT

a) This act is greatly welcome as it officially and centrally ends the monopoly of APMCs. Currently APMCs are extracting cess even for trade happening outside the physical premises of APMCs or deemed markets notified under various states’ APMC legislations.

The law ends this and opens alternative opportunities for trade and commerce of farm produce. We plead, not to compromise the stand at any cost.

b) It is unfair to levy cess on private markets which provide infrastructure and services, investment of which is borne by private investors anyway.

c) The fear that only PAN holders will dupe the farmers is not unfounded unless backed by some guarantees. However, there is risk inherent even in APMCs because of many factors, and farmers/producers have to decide on credibility of transactions by the parties involved therein.

The E-NAM software shows the bank balance of traders at that moment, and if this is available for even private markets through some app, transactions can be safer and surer. If there is some insurance cover for transaction failures under some cap, this could be a favorable arrangement.

a) This is a positive legislation for contracting farming and commercial services, since farmers are avoiding such services for fear of losing the title or complex litigation. This law has facilitated such services by clearly keeping land-title/renting encumbrances out of the contract. This should in principle promote contracts, allow use of fallow lands, small pieces of unviable lands etc.

But we do have several points of concern about this Act.

a) The heavy bias of this law towards the farmer/landowner may discourage sponsors of services as already farming is a risky business due to natural and market shocks.

b) The decision of duration or span for the tenure (five years now) of contract should be left to be decided by producer and sponsor as per their convenience.

c) For majority of the farmers holding small unviable pieces of land the reform should provide freedom to lease their lands to agri-professionals with capital and technology, and become in turn shareholders and also provide an opportunity to extend the services or take wilful exit for better opportunity

The SDO level for dispute resolution should be good, rather than going to court. But the latter option of court of law or may be an option. There could be a tribunal at state level to try disagreements at SDO level, before going to civil courts.

The ECA, often described as ‘draconian’ is seen as thwarting private investment in post-harvest storage, warehousing and processing, especially because these controls are implemented somewhat arbitrarily.

Historically, ECA-related restrictions have been neither predictable nor infrequent. And since restrictions are imposed temporarily, typically, for six months or a year at a time, the uncertainty thus created hinders operations of agribusinesses, logistics firms and traders alike.

While Essential Commodities (Amendment) Bill, 2020 is aimed at removing such impediments, it still contrarily retains the scope for the government to deploy the restrictions or impose restriction (but) only in ‘exceptional circumstances’. Such a legal provision allowing the government to revoke the act and intervene in the market renders the amendment meaningless.

Hence, mere amendment in place of abrogation of essential commodity act may not serve the desired purpose. It is necessary to understand that ‘fair price’ is a euphemism for suppressing commodity prices in favor of consumers and also for keeping prices of wage goods raw material low to promote industrial growth and ultimately maintaining low cost economy by exploiting the already famished farmers.

This reform needs to be followed by intervention free policy on exports, unlike the present ‘startstop’ policy under which onion exports were recently banned. This is why farmers hanker after MSP.

We will be publishing the Sanghatana’s discussion of APMC and MSP in a seperate article.

To not miss any updates, please consider subscribing to our news (we don’t make any money from it, it’s just for your convenience)

a) The next reform should give farmers freedom to lease their lands to agri-professionals with capital and technology, and become in turn shareholders and workers on the same land, or setting the stage to make forward contracts, transferring their risk to businessmen, leading hopefully to a freedom to lease unviable lands for a job and a share in profits.

b) Food processing industries require raw material in large quantities. There exists strong
reservation for corporate sectors’ entry into agriculture. But farming through cooperation of farmers formed through conversion of land and labour into equity could create the suitable situation convenient for large scale farming and raw material supplies.

d) Clearly, there must be some way by which those who find themselves trapped in agriculture are offered an escape route, giving way to those who feel confident of tackling the more technical and mechanized cultivation system.

e) What is needed is the setting up of an active and efficient land market that can bring about liberalization in the farm sector and ensure freedom of entry and exit.

g) Abolishing concomitantly the EC act, the Land related acts and other anti-farm-sector laws and acts concomitantly can only help accomplish the multiple motives and objects desired to be achieved by the newly enacted farm laws. There cannot be anything like a middle path in economic reforms. Reforms in other sectors (especially the industrial sector) cannot be implemented properly in an isolated manner – without encompassing the agriculture sector.

h) Farmers have also demanded since long to remove the hurdles in their free access to all the technologies especially genetically modified seeds, being used widely by their counterparts around the world.

i) The lands can become more productive by use of scientific methods or by infusion of capital and technology.

j) Pests, diseases and weeds can be dealt more efficiently and at lower cost by genetic
interventions. But Investments in R and D in general are very low in India. And there is currently a virtual paralysis on the use of genetic engineering and gene editing technologies.