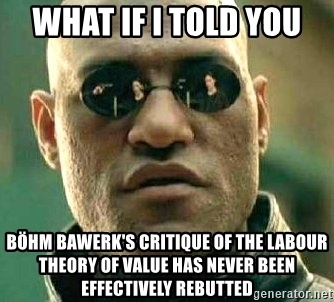 As Böhm-Bawerk explained 100 years ago,  Marx couldn’t tell the difference between profit and surplus, exposing the incoherence of his theory.

By J. Edward Britton on the Mises Wire

Few contributors in the field of economics have done more to educate the masses about the intellectual failures of Karl Marx than Eugen von Böhm-Bawerk. Most famous for his academic writings on interest rates, the Austrian economist was also known to aggressively debate against the scholastic thinkers of the Old Left. In fact, Böhm-Bawerk was a key figure in establishing the ongoing ideological war between Marxian economists and the Austrian school. This is most apparent in his brief but highly polemical book Karl Marx and the Close of His System. In this title, many individuals, especially young students of the free market, will find the most effective and succinct criticism of Marx: the simple fact that surplus value is not necessarily equal to profit.

To understand why this argument is so shattering to the Marxist narrative, one has to consider the significance of surplus value as an economic principle according to Marxists.

Exploitation: The Basis of All Marxism

The concept of exploitation—the belief that there is an undeniable relationship between labor input and surplus value such that monetary theft occurs between the wage laborer and the capitalist—is the foundation of Marxian critique. Marx writes in volume 1 of Das Kapital:

A…useful article, therefore, has value only because abstract human labour is objectified or materialized in it….What exclusively determines the magnitude of the value of any article is therefore the amount of labour socially necessary…for its production.

Marx believed that the relationship between socially necessary labor time and the sale of commodities is what creates profit. To the trained economist, this comes off as somewhat bizarre given that profit is commonly defined as a business’s total revenue minus assets. For Marx, however, “profit” was simply a synonym for “theft.” After all, if the wage laborer is the one providing the socially necessary labor time to create the commodity, it only makes sense that the capitalist, who provided little to no socially necessary labor, should give the leftover profits (a.k.a. surplus value) to the wage laborer. It is precisely in this argument that Marx’s purely economic critique of capitalism transforms into a moral argument against the nature of private property.

But just how influential is Marx’s theory of exploitation in the grand scheme of things? Well, according to far-left intellectuals such as Richard Wolff, exploitation is the conceptual basis of all of Marx’s work. Wolff asserts in his famous book Understanding Marxism that Marx’s views on exploitation even go as far as helping to explain economic inequality between the ultra-rich and the middle class in the twenty-first century.

Plainly speaking, without the theory of exploitation, there is no Marxism. This is where Böhm-Bawerk comes into play.

The reason why Böhm-Bawerk is a leading figure in debates about Marxian critique is that his argument is not only a direct blow to the fundamental assumptions of Marx but is also surprisingly easy to understand.

In Karl Marx and the Close of His System, Böhm-Bawerk comes to the conclusion that Marx’s views on exploitation cannot be true for the simple fact that surplus value and profit are not the same thing. He explains:

Marx calls [his theory] the rate of surplus value. It is identical with the production in which the surplus working time stands to the necessary working time…as the exact expression for the extent to which labour is worked for another’s benefit….Totally different from this is the rate of profit.

He then goes on to explain the incongruence between surplus value and profit with a hypothetical situation:

Böhm-Bawerk’s main point has to do with the composition of capital itself. As shown in his example, if a given business uses the same amount of labor, but with a different composition of capital, then the rate of profit will change accordingly without diminishing or increasing the amount of socially necessary labor time. In other words, since surplus value is not equal to profit, it should stand that capitalists are not actually “stealing” hard-earned value from the laborers they employ.

While Eugen von Böhm-Bawerk’s argument against Marx is far from the most influential or groundbreaking, it might just be the most effective. By providing a better understanding of the relationship between capital and profit, Bohm-Bawerk continues to offer a concise refutation that strikes at the very root of Marxian economics. It should go without saying that despite a plethora of Austrian intellectuals providing long and detailed rebuttals against Marxism, Karl Marx and the Close of His System is still just as good of a read as it was over 120 years ago when it was first printed.