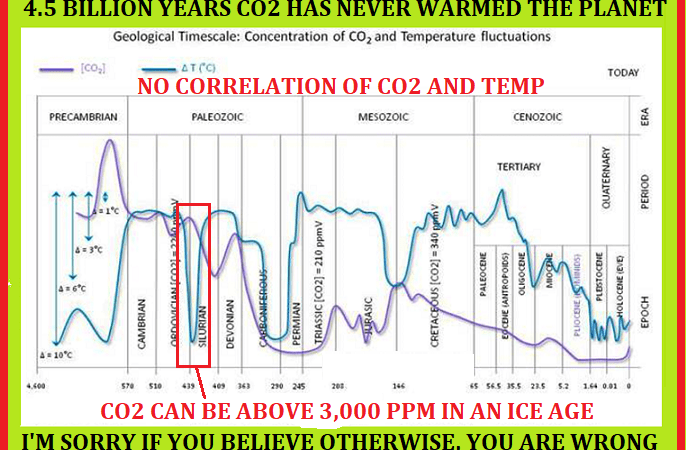 Numerous thought leaders agree that climate change is the defining issue of the twenty-first century. To garner widespread support for their cause, activists often present climate change as an existential risk. We are repeatedly told that there is incontrovertible evidence that humans are the main cause of climate change and that its effects are cataclysmic. Failing to uphold any of these positions can result in great reputational damage for pundits and scholars. Due to fear of backlash many choose to remain silent. Revisiting the history of climate change, however, would temper the hysteria of climate alarmism. Climate change is not a new phenomenon, and neither is it synonymous with disasters. By showing that the mainstream position on climate change is misguided, we will demonstrate that radical recommendations are unwarranted and hence more likely to inflict damage than prosperity.

The first egregious error asserted by mainstream pundits is that climate change is a twenty-first-century problem. In contrast to this outlook, climate change is a natural event than can occur irrespective of our existence. Because of its variability, the climate is always subject to changes. The Little Ice Age along with the Medieval Warm Period are examples of climate change. It is evident that climate activists are unable to ascertain the relationship between previous cyclical variations and climate change. Had this been the case they would have recognized that for centuries humans have been cognizant of climate change and therefore have judiciously embarked on ingenious strategies enabling adaptability to new circumstances. According to a 2020 study published in the National Science Review describing responses to climate change in China’s Nihewan Basin during the Pleistocene era: “The unstable environmental conditions at the onset of the Mid-Pleistocene Climate Transition provide a good example of the adaptive versatility of hominins in China during the Early Pleistocene, contrasting with the notion of long-lasting conservative behaviours and undifferentiated technologies across the Pleistocene.” Human ingenuity can avert possible disadvantages stemming from climate change. Besides, contemporary individuals, like their ancestors, have an immense capacity to innovate. For example, scientists from Purdue University in America to their counterparts at the Australian National University are constantly exploring new ways to reduce the implications of drought. Climate change is not a novel scenario that should scare us into defeatism. The only constant is change, and humans never fail to illustrate their dexterity when managing disruptive processes.

Furthermore, like humans other species have shown an impressive ability to adjust to climate change and its effects. Although the rantings of activists portend gloom, rigorous analyses indicate that biodiversity thrives in warm periods. In a 2009 study published in the Journal of Forest Ecology and Management the authors contradict the assumption that global warming is detrimental to the health of plant species by writing that “increases in future temperatures could lead to growth in forest productivity in the Pacific Northwest, especially in Washington.” A 2012 report authored by ecologists in PLOS ONE is even more critical of the thesis that climate change depletes wildlife: “Arctic and subarctic (i.e., [sub]arctic) ecosystems are predicted to be particularly susceptible to climate change. Consequently, species at high latitudes should be especially susceptible to climate change, likely experiencing significant range contractions. Contrary to these expectations, our modelling of species distributions suggests that predicted climate change up to 2080 will favour most mammals presently inhabiting (sub)arctic Europe. Assuming full dispersal ability, most species will benefit from climate change, except for a few cold-climate specialists.” Nonhuman species rely on a litany of strategies to navigate climate change. This is made clear by some researchers’ concluding remarks: “That extant species have survived abrupt, historical climatic changes might be—at least partly—good news. It suggests that species’ ability to survive drastic climate change is greater than hitherto recognized, perhaps due to the phenotypic variability of populations, or to their ability to survive in microclimatic pockets in a heterogeneous landscape.”

So far, we have deduced that climate change is a normal process with positive implications ranging from improved vegetation to dynamic ecosystems. Now we need to establish if CO2 is causing global warming. Based on the orthodoxy of the school of global warming, rising levels of CO2 can trigger warming. But there is a mountain of evidence stating otherwise. For instance, in the peer-reviewed study titled “On the Existence of a ‘Tropical Hot Spot’ and the Validity of EPA’s CO2 Endangerment Finding,” the authors write: “At this point, there is no statistically valid proof that past increases in Atmospheric CO2 Concentrations have caused the officially reported rising, even claimed record setting temperatures.” Moreover, several researchers attribute warming to oceanic cycles. As professor of atmospheric sciences Anastasios Tsonis explains: “El Niño Southern Oscillation cycle and its ‘cousins’ do not tell us anything about human contributions to climate change. They do, however, underscore the importance of natural variability in climate change. While humans may play a role in climate change, other natural forces such as the oceans and extraterrestrial influences such as the sun and cosmic rays may play important roles too.” Absent a direct consensus that CO2 is driving global temperatures, does it make sense to pursue net-zero policies?

Many of these proposals require divesting from fossils fuels and in other cases full-scale deindustrialization. Yet the uncertainty surrounding the role of CO2 in activating global warming does not inspire confidence in such actions. Intriguingly, however the research is quite damning on the ability of anticarbon measures to reverse prosperity. Reporting for the BBC, Matt McGrath conveys research arguing that negative emissions technologies may spur a rise in food prices:

Technologies that can remove carbon dioxide from the air could have huge implications for future food prices, according to new research….One of the ideas on how to achieve this is called BECCS—bioenergy with carbon capture and storage. It means growing crops that soak up CO2, then burning them for electricity while capturing and burying the carbon that’s produced….Critics say this idea would need the deployment of huge amounts of land which would reduce the amount of land for agriculture at a time of increasing global population….Another technology that has raised much interest is called Direct Air Capture (DAC), where machines pull CO2 directly from the atmosphere….This would require energy equal to 115% of current global natural gas consumption.

On the other hand, contrary to the unfortunate portrayal of CO2 as a pollutant, its fertilization effect is widely acknowledged by scientists. Commenting on this process in the Journal of Environmental and Experimental Botany, scientists aver that “elevated CO2 concentration increases the plant growth and leaf photosynthesis, even under water stress conditions.” Although, real analysis informs us that this gas has some beneficial effects, mainstream pundits persist in misinforming the citizenry. Unless we confront their errors the war on carbon dioxide will succeed in making humanity worse off.

Additionally, we cannot conclude a discussion on climate change without comparing global warming to cooling. Writers lament global warming, but cooling is less conducive to prosperity. Here is an excerpt from a study documenting the relationship between climate and development in China’s Hexi Corridor over the last two millennia: “Results found the region’s reconstructed temperature to be strongly coupled with precipitation dynamics, i.e., a warming climate was associated with a greater supply of moisture, whereas a cooling period was associated with more frequent drought. A prolonged cold period tended to coincide with societal instability….In contrast, a prolonged warm period coincided with rapid development.’’ Another article also discussing China yields a similar conclusion: “The overall impacts of climate were negative in the cold periods and positive in the warm periods.” As we highlighted earlier, warming is compatible with growing vegetation and ecological diversity, so declining agricultural productivity in cooler periods may be a possible contributor to conflict and economic distress. For example, Murat Iyigun, Nathan Nunn, and Nancy Qian (2017) in assessing conflicts in Europe, North Africa, and the Near East from 1400 to 1900 remarked that cooler periods are likely to be characterized by warfare: “We show that cooling is associated with increased conflict. When we allow the effects of cooling over a fifty-year period to depend on the extent of cooling during the preceding period, the effect of cooling on conflict is larger in locations that experienced earlier cooling.”

It is apparent that though climate change is a real issue, several claims postulated by climate activists are overstated and not supported by scientific evidence. Further climate change is a dynamic process that is beyond our control, with diverse effects. The doomsday mantra of climate activists is guided by antihumanism and a desire for control. Such a worldview will not induce human flourishing and must be rejected by well-thinking people. In sum, radical and expensive proposals like the Green New Deal are not justified by the phenomenon of climate change.