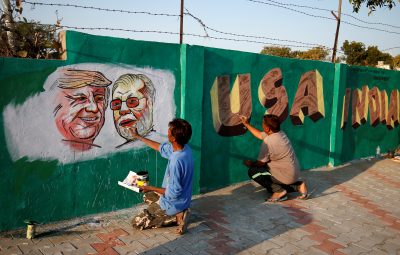 It’s unclear what Indian Prime Minister Narendra Modi said to US President Donald Trump when the former called the White House on 11 February. Reportedly what sealed the presidential trip to India was Modi’s promise that some 5–7 million people would be lining the route from Ahmedabad airport to the new stadium in Motera to greet him.

Ahmedabad is the largest city of Gujarat, the state where Modi ruled as chief minister for over a decade. For a showman like Trump, the prospect of dawn-to-dusk US television coverage rich in colourful imagery featuring millions of Indians attesting his international popularity and exotic locales like the Taj Mahal must have been too intoxicating to turn down, especially in a year in which he is seeking re-election.

Optics is clearly the driver of this visit.

Yet in getting Trump to visit India, Modi may have exaggerated the crowds that his Bharatiya Janata Party (BJP) will be able to muster. What may transpire is a repeat of Trump crowing that his 2017 presidential inauguration attracted ‘the largest crowd ever’, despite cameras showing otherwise. The President may claim ’millions’ welcomed him in India, when evidence might only reveal a few thousand waving flags held by school children and public employees instructed to line the roads negotiated by the Trump motorcade.

Before Modi’s phone call, Trump had publicly made the India trip conditional on a ‘real trade deal’. But Trump relented despite the lack of any substantial trade agreement.

The Modi government stuck to its stand that exports of US dairy goods to India require the US government to certify that these products were not sourced from animals fed with feeds produced from ‘internal organs, blood meal or tissues of ruminants’. This rules out most US dairy items. This deliberate complication of the certification process is another way of ‘protecting’ the 80 million Indian rural households involved in the dairy industry whose interests no government in Delhi can ignore.

Still, India is expected to agree to a face-saving deal in return for its retaining beneficiary status in the US Generalized System of Preferences. India may reduce tariffs on certain niche agricultural products such as cherries and blueberries and on other items like Harley Davidson motorcycles that Trump is so hung up on. But only a small dent will likely be made in the US trade deficit with India (running at US$16.9 billion in 2018–2019) as a result of the Trump trip.

The US failure to pressure India on dairy exports shows the limits of US coercive policies on trade. But it also mirrors the closing down of the US H1B visa channel that Modi pleaded with Trump to keep open. It may convince Trump to further twist Modi’s arm to buy vintage military hardware that the Indian armed forces are unwilling to acquire, such as the venerable F-16 fighter aircraft in service with the Pakistan Air Force for the past 40 years but refurbished with new avionics and numeral designation (F-21).

Washington’s case is that manufacturing the 1970s vintage combat plane in India under license would be open sesame to more advanced military technology deals in the future. But it has failed to convince India because modern combat aircraft and other military technologies are readily available from Russia, France and Sweden. A consolation contract is in the works for the sale of 24 SH-60 Seahawk helicopters worth nearly US$2 billion from the United States to India.

The F-16 symbolises US reluctance to transfer high-value technology. Its reluctance was also highlighted by the 2012 Defence Technology and Trade Initiative that was meant to facilitate collaboration in cutting-edge military technology development but has not resulted in a single project to date.

For Modi to throw Trump a bone and consent to F-16 production as a flagship venture in his stillborn ‘Make in India’ program would risk ridicule and weaken his political standing. It would further fuel an opposition drive against his government that is already buoyed by the BJP’s successive electoral defeats in Rajasthan, Jharkhand, Maharashtra and Delhi. It may prompt Modi to move slowly on Trump’s request to remove the case-by-case approval for US forces to use Indian military facilities under the 2018 Logistics Exchange Memorandum of Agreement (LEMOA).

Another reason is that Modi is simultaneously cultivating relations with China. In lieu of invigorating LEMOA, Modi may agree to sign the Basic Exchange and Cooperation Agreement (BECA) to share geospatial information via digitised maps for accurate terminal guidance of projectiles. BECA will complete the set of three ‘foundational accords’ that the United States has been hankering for, the other two being LEMOA and the Communications Compatibility and Security Agreement.

Modi and Trump are alike in that they are both narcissistic, autocratic and hate to lose. Trump’s India trip may put both of them to the test. Neither will want to be seen as backing down or accepting accords contrary to India First and America First rhetoric for fear of domestic backlash. Personal bonhomie between Modi and Trump is real but it cannot plaster over the deep India–US differences in trade and technology or in geostrategic interests and calculations.