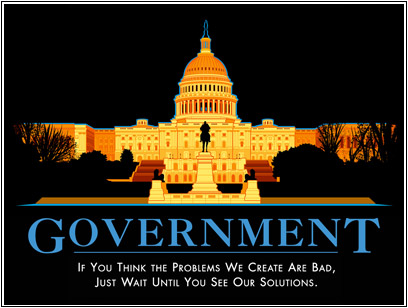 Anyone who’s seen the John Hughes movie Ferris Beuller’s Day Off probably remembers the scene where Ferris’s economics teacher (Ben Stein) explains the Smoot-Hawley Tariff Act to a roomful of bored, sleeping students. The scene is brilliant for many reasons, perhaps most so because it perfectly demonstrated how some of the most boring things in history are also the most important.

Smoot-Hawley was, of course, one of the great blunders in history.

Passed in 1930 over the objection of more than a thousand economists, the legislation increased tariffs (which were already high) on imports to protect US industries and farmers, sparking a trade war that deepened the Great Depression. It’s a perfect example of authorities taking decisive action to alleviate a crisis—and making things much worse.

What many forget is that Smoot-Hawley didn’t cause the Depression. It was a response to the Depression. Indeed, it may never have passed at all without the catalyst—the Stock Market Crash of 1929—that sent the nation into a frenzy. Senate Republicans had defeated the legislation the previous year, but trade restrictionists found a convenient crisis in Black Tuesday, which triggered widespread hysteria, allowing the law to squeak through.

Designed to protect Americans during the economic crisis, Smoot-Hawley proved disastrous. Imports fell from $1,334M in 1929 to just $390M in 1932. Global trade fell by roughly 66 percent, government data show. By 1933 unemployment was 25 percent, the highest in US history.

To “correct” things, Americans elected Franklin D. Roosevelt, who launched a series of federal programs—which made the crisis even worse. The rest, as they say, is history.

The Government Has a History of Making Panics Worse

Smoot-Hawley and the New Deal are hardly the only examples of government actions making a panic worse.

In his book Basic Economics, the economist Thomas Sowell recounts several instances in which governments turned small problems into major ones by using blunt force—often price controls—to respond to public panic about rising costs of a given commodity.

One of the more famous examples of this is the gasoline crisis of the 1970s, which started when the federal government took a small problem (temporary high costs of gasoline) and turned it into a big one (a national shortage).

It began when OPEC (the Organization of Petroleum Exporting Countries), a newly formed oil cartel, cut oil production, causing fuel prices to rise. To address the rise, the Nixon administration (and later the Ford and Carter administrations) resorted to price controls to keep fuel prices low for consumers.

The result? Mass fuel shortages across the country that led to long lines and many Americans unable to buy fuel. This “energy crisis,” as it was dubbed at the time, in turn wreaked havoc on the automotive industry.

As Sowell explains, however, there was not an actual scarcity of gasoline. There was nearly as much gas sold in 1972 as the previous year (95 percent, to be precise). Similarly, Americans in 1978 consumed more gasoline than in any other previous year in history. The problem was the resources were not being allocated efficiently because of state-imposed price controls.

In an economy with rigidly planned proportions, such situations are not the exception but the rule—an everyday reality, a governing law. The absolute majority of goods is either in short supply or in surplus. Quite often the same product is in both categories—there is a shortage in one region and a surplus in another.

No one likes high gas prices, but the energy crisis of the 1970s wasn’t truly a crisis until the government created it. Nor was the result unique. Similar examples kind be found throughout history, from the grain shortages in Ancient Rome brought about by Diocletian’s “Edict on Maximum Prices” to the mortgage crisis in 2007 and the financial crisis that ensued.

This might seem obvious in hindsight, yet similar mistakes are made today during crises, just on a smaller scale. To address alleged crises in housing, California and Oregon recently passed rent control laws that will surely have a devastating impact on residents in those states. Similarly, anti-price gouging laws (and social pressure) regularly lead to mass shortages during national emergencies.

As America endures the most frightening pandemic in a century, the COVID-19 outbreak, it’s important that decisions affecting the lives, liberties, and livelihoods of hundreds of millions of people are being reached through reason, not collective fear.

Pandemics are clearly different from economic depressions and fuel shortages, but some of the same lessons apply. Like an economic panic, pandemics incite mass fear, which can lead to flawed and irrational decision making.

We know that human beings by nature are prone to crowd-following, especially during periods of social unrest and panic. This instinct has resulted in some of the greatest tragedies in human history.

COVID-19 may very well prove to be every bit as dangerous as we’ve been led to believe. Epidemiologists, vaccine researchers, and other medical experts agree it’s highly contagious and deadly, especially for certain at-risk demographics (the elderly and people with compromised immune systems and lung damage, for example). Yet many of the same experts disagree on the scope of the COVID-19 threat.

One of the problems medical professionals are encountering is they simply don’t have a lot of reliable data to work with.

“The data collected so far on how many people are infected and how the epidemic is evolving are utterly unreliable,” John P.A. Ioannidis, an epidemiologist and professor of medicine at Stanford University who co-directs the university’s Meta-Research Innovation Center, recently wrote in Stat.

Let’s face it: pandemics are scary. This is probably doubly true in the age of social media, when the scariest models tend to be the ones most shared, which fuels even more panic. Because of the heightened level of fear, it’s not unreasonable to think public officials could “follow the crowd,” which is a bad idea even when the crowd isn’t totally petrified.

“Crowds do not reason….they tolerate neither discussion nor contradiction, and the suggestions brought to bear on them invade the entire field of their understanding and tend at once to transform themselves into acts,” wrote Gustave Le Bon in his seminal 1895 work The Crowd: A Study of the Popular Mind.

It’s no secret or coincidence that crises—foreign wars, terrorist attacks, and economic depressions—have often resulted in vast encroachments of freedom and even given rise to tyrants (from Napoleon to Lenin and beyond). In his book Crisis and Leviathan, the historian and economist Robert Higgs explains how throughout history, crises have been used to expand the administrative state, often by allowing “temporary” measures to be left in place after a crisis has abated (think federal tax withholding during World War II).

“When [crises occur] … governments almost certainly will gain new powers over economic and social affairs,” wrote Higgs. “For those who cherish individual liberty and a free society, the prospect is deeply disheartening.”

Let’s take the novel coronavirus deadly seriously, but let’s not throw reason, prudence, or the Constitution out the window while doing so.

If we do, we may find the government’s “cure” for the coronavirus cure is even worse than the disease.