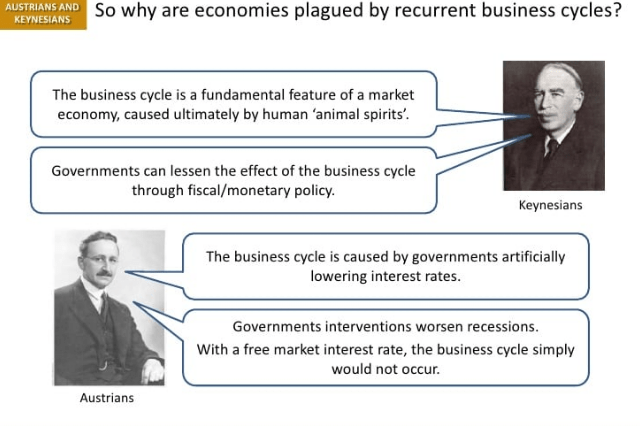 Thread by Theo Mogonet (translated, with ILR edits in Italics)

Why do fiscal and monetary stimuli only exacerbate recessions? What is the recession symptom of? How are recessions caused in the first place?

1 / We owe the the Austrian Business Cycle Theory to Friedrich Hayek and Ludwig von Mises.

It finds its first complete formulation in a series of lectures given by Hayek during the 1930s and collected in his work “Prices and Production”.

2 / The two Austrians build on the idea of their predecessor, Eugen von Böhm-Bawerk, according to whom the interest rate would be the market price formed by the meeting of the time preferences of different economic agents.

3 / Our time preferences represent our subjective valuation of future goods in relation to present goods, and therefore define the price we are willing to pay to postpone the use or consumption of our resources to a later date.

4 / The meeting of these subjective valuations on the capital market, with on the one hand savers (suppliers of capital), and on the other, entrepreneurs (applicants for capital), forms interest rates, i.e. the (temporal) opportunity cost of capital immobilization.

5 / The central idea behind Austrian Business Cycle Theory is that, far from being an arbitrary or a macro policy variable, this price (ie, the interest rate) fulfills a coordinating function in the economy.

6 / When I save, the stock of capital increases and the interest rate falls, which signals to the entrepreneur that it is in his interest to invest today in such a way as to create production goods and facilitate my consumption of tomorrow.

7 / The more savings there are, the more resources are released now to be invested in the production of future goods.

Conversely, the less savings there are, i.e. the more the interest rates are high, the more the consumption is urgent, and the lesser the production of future goods there is.

Therefore, what to expect from the manipulation of these rates by central banks, if not temporal dis-coordination?

9 / When interest rates are lowered by decree, entrepreneurs are encouraged to build productive assets. However, as there was no prior savings, the resources necessary for the finishing of production goods, & / or the consumption of future consumer goods, are lacking.

10 / In practice, this manifests itself in the form of crises of overproduction.

At a certain stage of the expansion, the resources necessary to finalize economic plans are lacking or demand is lacking …

12 / If the crisis is interrupted by a drop in interest rates by decree, to “restart the economy”, the imbalances cannot be absorbed, savings cannot be reconstituted and we thus accentuate the magnitude and the depth of the bad allocation of capital.

13 / In the same way that increasing the number of tickets printed does not increase the capacity of a football stadium, lowering rates, i.e. increasing the money supply, does not allow the creation of real resources and cannot therefore do anything against the underlying malaise revealed by the depression.

14 / The recession reveals a tension between immediate consumption and the purchase of resources, by entrepreneurs, for the needs of production.

The current price level cannot satisfy everyone, and an adjustment must therefore be made: we purge the excesses.

15 / Without this “creative destruction”, i.e. reallocation of capital to productive jobs, the marginal profitability of capital drops and it accumulates more and more debt in the face of less and less real wealth (over-indebtedness).

16 / In fact, this theory, which earned F. Hayek the Nobel Prize in 1974, attributes recessions to intertemporal incoordinations between producers and consumers, caused either by imbalances which are quickly resolved, or by price manipulation (ie manipulation of interest rates by the central bank / the State) which is self-perpetuating (as there is no political incentive to face the recession).

17 / The will to “stimulate” of politicians, and the Keynesian economists who support them, are at the root of this phenomenon, and further aggravate it.

The “remedy” is killing the patient even though the patient’s regenerative powers are sufficient on their own.

18 / The consequences are: a spiral of over-indebtedness, a sterilization of real growth, episodic crises, a perpetual extension of state intervention (a little more poison) and second-order effects such as excessive financialization or corruption.

20 / In short, the manipulation of the interest rate is the most deleterious central planning measure imaginable.

We currently have institutions whose official mandate is to perpetuate this sabotage.

For English speakers who would like to learn more about the subject in video :