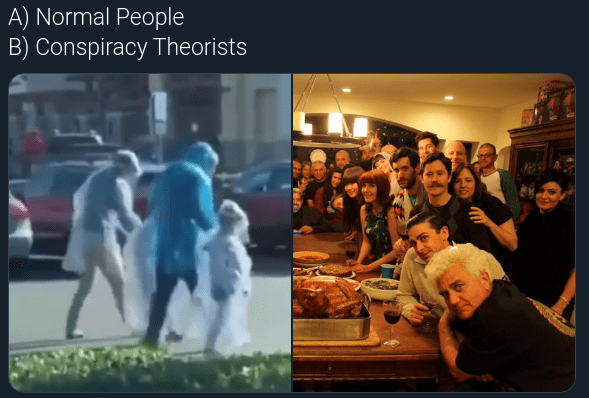 By Phillipp Bagus on Mises.org

The history of mass hysteria, or mass sociogenic illness is fascinating. Cases of mass hysteria have been documented since the Middle Ages. Let me just mention a few of the more recent cases.

When a radio play by Orson Welles, War of the Worlds, was broadcasted in 1938 shortly after the suspension of the Munich agreement, the play allegedly caused panic among listeners, who thought that they were under attack by Martians.Another intriguing case is an episode of a Portuguese TV show called Strawberries with Sugar. In the episode, the characters were infected by a life-threatening virus. After the show, more than three hundred students reported similar symptoms as the ones experienced by the TV show characters such as rashes and difficulty breathing. Some schools even closed. The Portuguese National Institute for Medical Emergency concluded that the virus did not exist in reality and that the symptoms were caused by mass hysteria.

Similarly, on Emirates flight 203 in September 2018, dozens of passengers started to believe they were sick after observing other passengers with flu-like symptoms. As a consequence of the panic, the whole flight was quarantined. In the end only a few passengers had a common cold or the seasonal flu.

It is well known that there exist nocebo effects, which are the opposite of placebo effects. Due the placebo effect, a person recovers from an illness because she expects to do so. When we suffer a nocebo effect, on the other hand, we get ill just because we expect to become ill.1 In a self-fulfilling prophecy, the expectation can cause the symptoms. Anxiety and fear exacerbate this process.2

Mass hysteria can cause people to have symptoms. Moreover, hysteria, be it collective or not, makes people behave in ways that prudent persons not affected by the hysteria would likely consider absurd. It is open for empirical research to investigate if and to what extent the world has been suffering from mass hysteria during the covid-19 epidemic.3 We all have seen people hoarding toilet paper, wearing masks while driving alone in cars, or have heard stories of people virtually not leaving their houses for months. We also know people who are scared by the virus even though their own risk of death is minuscule.

It is true that hysteria can lead people to inflict enormous harm on themselves and others. Yet in a free society there exists an essential limit to the havoc caused by mass hysteria, and this limit is private property rights. In a free society mass hysteria cannot lead to a massive violation of private property rights by the state, simply because the state does not exist.

Moreover, while anyone in a health hysteria may voluntarily close his business, wear a mask, or stay at home, in a free society no one can force others who do not succumb to the hysteria to close their businesses, wear masks, or quarantine. A small minority who continue to live their normal lives and are free to do so can be a wake-up call to those who succumbed to the mass hysteria, especially the borderline cases. Imagine that a small group of people continues to go shopping, to work, to breath freely, to meet with friends and family, and that they do not die. Others may then follow their example and the group of hysterics shrinks.

While the destruction inflicted by mass hysteria is limited by private property rights in a free society, such limits do not exist when there is a state.4 Indeed, a well-organized group that has succumbed to mass hysteria may get control of the state apparatus and impose measures on the rest of the population and inflict untold harm. The possibility of mass hysteria is an important reason why the institution of the state is so dangerous.

Moreover, while in a free society there are mechanisms that reduce mass panics, mass hysteria can be exacerbated by the state for several reasons:

First, the state can and, as in the case of the covid-19 epidemic, does prohibit and diminish those activities that reduce fear and anxiety, such as sports and diversion. The state actually fosters social isolation, contributing to anxiety and psychological strain, ingredients that spur mass hysteria.

Second, the state takes a centralized approach to dealing with the source of the hysteria, in our case the perceived threat of a virus. The state imposes its solution, and in consequence there is no or very reduced experimentation to solve the problem. People who have not succumbed to the hysteria and oppose the state’s approach are suppressed. They cannot demonstrate alternative ways to confront the “crisis,” because these alternative ways are prohibited by the state. As a consequence, groupthink increases and the hysteria feeds itself, as no alternatives are shown to people.

Third, in a state, the media is often politicized. News outlets and social media platforms have close relationships with the state. Media outlets may be directly owned by the state, as are public TV channels, they may need state licenses to operate, they may look for the goodwill of state agencies, or may simply be staffed with people who were educated in state schools. These news agencies and social media platforms engage in massive negative news campaigns, intentionally scare people, and suppress alternative information. If people listen to, watch, or read negative and one-sided stories all day, their psychological stress and anxiety increases. Mass hysteria sponsored by a biased media sector may run out of control.

Fourth, negative news from an authoritative source is especially harmful for psychological health and produces anxiety. If there exists in society an institution of total power such as the state that intervenes in the lives of people from birth to death,5 the announcements of its representatives acquire weight. Many people attach great authority to these representatives and to the warnings of state institutions. So, when a doctor such as Anthony Fauci speaks in the name of the state and tells the people to worry and wear masks, it becomes easier for mass hysteria to develop than would be the case in a decentralized society.

Fifth, the state sometimes actively wants to instill fear in the population, thereby contributing to the making of mass hysteria. In fact, during the first months of the corona epidemic, an internal paper of the German Department of the Interior was leaked to the public. In the paper, the experts recommend that the German government instill fear in the German population. The paper recommends increasing fear with three communication measures. First, the authorities should emphasize the breathing problems of covid-19 patients, because the human beings have a primordial fear of death by suffocation, which can easily trigger panic. Second, fear should also be instilled in children. Children could get infected easily when meeting with other children. They should be told that when they in turn infect their parents and grandparents these could suffer a distressful death at home. This measure intends to invoke feelings of guilt. Third, authorities should mention the possibility of unknown long-term irreversible damage after a corona infection and the possibility of the sudden deaths of people who were infected. All these measures were intended to increase fear in the population. Fear, at the end, is the foundation of every government´s power. As H.L. Mencken put it:

The whole aim of practical politics is to keep the populace alarmed (and hence clamorous to be led to safety) by menacing it with an endless series of hobgoblins, all of them imaginary.

To sum up: mass hysteria is possible in a free society, but there are self-correcting mechanisms. The harm such hysteria may inflict is limited by the enforcement of private property rights. The state amplifies and exacerbates mass panics, causing tremendous havoc. What are local, limited, and isolated outbreaks of mass hysteria in a free society the state can convert into a global mass hysteria. Unfortunately, there is no limit to the damage mass hysteria can do to life and liberty if it takes hold of the government, as the state does not respect private property. The unscrupulous violation of basic liberties during the corona epidemic is a case in point. The possibility of mass hysteria is another reason why the state is such a dangerous institution to have.