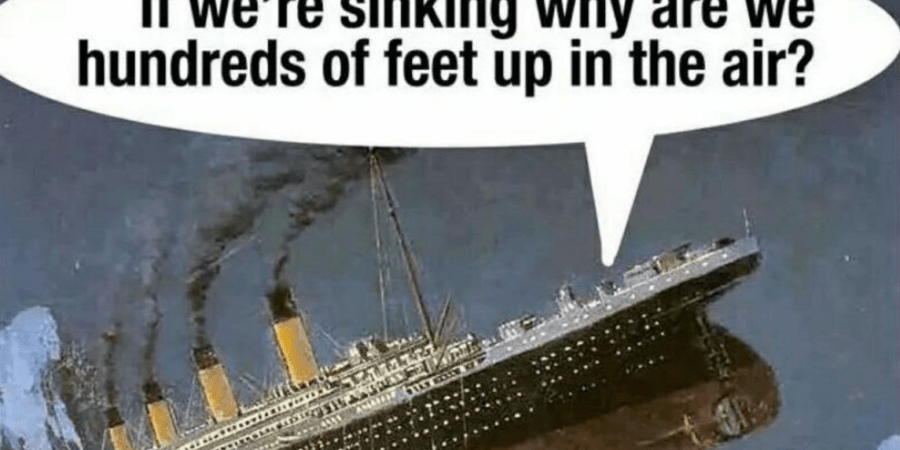 By Bradley Thomas on Mises.org

One reality that the unprecedented Reddit/GameStop short squeeze alerted more people to is the major disconnect between the ballooning stock market and the actual economy. A stock market bubble is a significant indicator of the boom phase of the boom-bust economic cycle that we have grown accustomed to over the past several decades.

Many, mostly on the left, blame free market capitalism for economic cycles, however, boom-and-bust cycles are not an inherent feature of a market economy. Austrian school economists have for a century convincingly argued that business cycles are a result of monetary distortions in the economy created by artificial, or fiat, money creation and the false credit expansion that results from it.

Mises, Hayek, and Rothbard are perhaps the best-known proponents of this theory. An unheralded but incredibly insightful work on Austrian business cycle theory that rivals the work of those greats is Jesús Huerta de Soto’s 1998 Money, Bank Credit, and Economic Cycles.

Covering everything from the legal (or illegal) nature of fractional reserve banking to free banking theory, to a critique of Keynesian theory, Huerta de Soto’s work is as thorough as it is enlightening.

With specific regard to the business cycle, possibly the most useful analysis is Huerta de Soto’s, which breaks the business cycle into six stages. The entire book is certainly daunting for the layman, but for curious beginners looking for an introductory explanation of Austrian business cycle theory (ABCT), understanding these stages will alone make you more intelligent than 99 percent of politicians and leftist econ professors.

The expansion phase of the boom is initiated by the creation of fiat money by the central bank (the Federal Reserve in the case of the US), which is injected into the economy in the form of loanable funds. This enables banks to extend credit not backed by real savings but conjured up out of thin air.

Most fiat money is created by the Fed via open market operations. This process involves the Fed buying government securities owned by banks: banks swap out relatively illiquid government bonds for cash balances that can be loaned out. But the Fed doesn’t use any of its cash reserves to pay for the bonds but rather digitally creates new money to credit to the banks selling the bonds.

Money out of thin air.

Moreover, fractional reserve banking allows the banks to loan an amount of credit far greater than the original amount of money created by the central bank. For instance, if reserve requirements on banks are 10 percent, the banks can turn, say, $1 million in new money from the Fed into $10 million in new credit.

The key difference between this process and the extension of credit backed by actual savings is that there is no sacrifice on the part of savers in the economy. When consumers are actually saving, there will be a drop in consumption spending. Under newly created fiat credit expansion, there is no corollary drop in consumption spending, because people are not putting any greater share of their money into savings.

As a result of the infusion of additional loanable funds and lower interest rates, businesses increase their borrowing to invest in capital goods, typically more durable capital goods. As Huerta de Soto notes, “Hence businessmen rush out to launch investment projects as if society’s real savings had increased when in fact this has not happened.”

Interest rates that reflect actual market conditions serve a coordinating role. Low interest rates signal that consumers have a lower time preference and as such are deferring consumption now in favor of savings. Those savings often translate into increased future consumption.

Lower interest rates entice entrepreneurs to invest in durable goods, because financing is cheaper and makes more investments appear profitable. Investment is focused more acutely on industries that are more interest rate sensitive, typically more durable capital goods (and some durable consumer goods like housing), because they are financed with longer-term loans.

In short, low interest rates encourage entrepreneurs to invest in productivity gains that will yield greater output in the future while reflecting consumer preferences to defer consumption spending into the future.

The intertemporal plans of consumers and producers are in harmony—if interest rates reflect actual market conditions.

The increased demand for durable capital goods drives up prices for the inputs used to produce these capital goods, namely labor and natural resources. Keep in mind that because consumer spending has not decreased, there are no productive resources being freed up from the consumer goods sector. As a result, there is significantly more money chasing a relatively fixed supply of durable capital goods, helping to drive up their prices.

In his book, Huerta de Soto explained, “when credit expansion takes place without the backing of a prior increase in saving, no original means of production are freed from the stages closest to consumption.”

With the spread of easy credit aiding booms in the capital goods sector (and oftentimes in housing), stock market speculation becomes more widespread, fueling rises in the market.

Because the time preference of consumers has not changed, the rate of consumption spending relative to investment spending is not depressed by a higher preference for savings. The additional earnings of entrepreneurs and workers in the capital goods sector are directed toward more consumer spending.

Due to increased demand for consumer goods coming from those with higher wages and profits in the capital goods sector, Huerta de Soto explains, prices of consumer goods rise faster than wages—in relative terms—in the consumer goods industries.

As a result, accounting profits in the consumer sector appear, increasing demand for investment in those sectors.

At this point, the economy stands at a tipping point, on the verge of a crisis caused by one of two situations (often a combination of both): a credit crunch or a real resource crunch.

Moreover, the increased demand for resources in the capital goods sector outstrips the producers’ ability to create those resources given the relatively fixed amount of resources in these industries. This real resource crunch forces prices for inputs to spike, making more investments appear unprofitable.

As a greater amount of finished goods is brought to market as a result of the earlier spike in capital goods investment, sellers find an insufficient level of consumer demand, because there is no increased pool of real savings for them to draw upon.

As Huerta de Soto writes, “The crisis and economic recession reveal that a highly significant number of investment projects financed under new loans created by banks are not profitable because they do not correspond to the true desire of consumers.”

The situation is exacerbated by the increase in interest rates, wages, and the prices of inputs in the capital goods industries. Fewer business investments and expansions are embarked upon.

Workers in capital goods industries are laid off in significant numbers; companies go out of business at an increasing pace. Loans are not repaid, and bank defaults mount, causing a credit freeze.

The economy falls into recession, and pessimism spreads. Entrepreneurs need to liquidate their malinvestments; readjustments must take place—a new arrangement of capital and labor to reflect new market conditions is needed.

For recovery to occur, genuine savings are needed to fuel new investments in patterns of production that align with consumer preferences. The prices of productive resources need to be allowed to adjust to reflect new realities, to enable a more rapid reshuffling of resources to create a sustainable production structure.

If the new investments are built on credit expansion from fiat money creation, however, this begins phase one of the next business cycle.