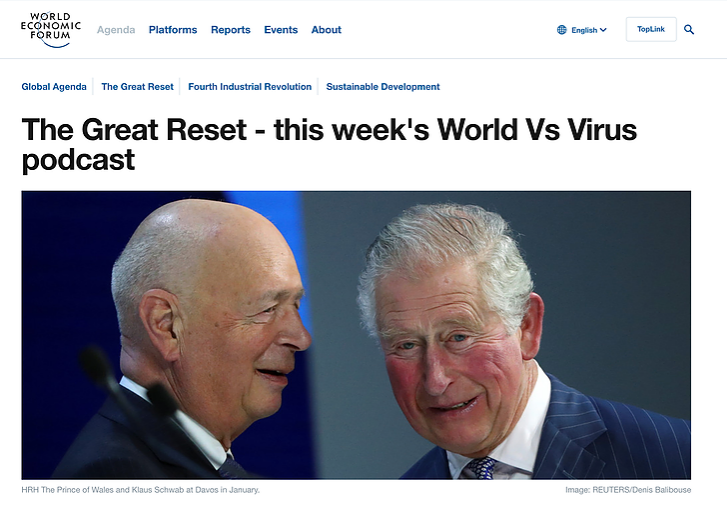 We have recently seen the WEF ( World Economic Forum) announce The Great Reset and the launch of Dr Klaus Schwab’s Fourth Industrial Revolution. Even Prince Charles of England got involved in the action! https://www.weforum.org/agenda/2020/06/the-great-reset-this-weeks-world-vs-virus-podcast/

Here is a great video by Spiros Skouras about this so-called The Great Reset, The Great Reset Plan Revealed: How COVID Ushers In The New World Order: https://www.youtube.com/watch?v=X6pzXrEBqR0

I highly recommend you watch if you want to find out even more about this shadowy organization called the World Economic Forum.

Dr Schwab and his Globalists friends certainly did not let a crisis go to waste as Rahm Israel Emmanuel, former Mayor of Chicago and President Obama’s Chief of Staf, once advised.

Dr Schwab and his Globalist friends have been planting the seeds for their Fourth Industrial Revolution and their reset since 1971 or maybe even before that. The World Economic Forum which organises the Davos Summit every winter in Davos, Switzerland started out as the European Management Forum (EMF) in 1972. What is interesting about the EMF is that its major patron was Mr Altiero Spinello who was a member of the Commission of the European Communities which was the forerunner of the European Commission. The Chairman of the EMF was a German banker by the name of Dr Hermann J. Abs. http://www3.weforum.org/docs/WEF_First40Years_Book_2010.pdf

Let’s have a look at who was Altiero Spinelli and who was Dr Hermann J. Abs.

According to Wikipedia Mr Spinelli was once a member of the Italian Communist Party and one of the founding fathers of the European Union. https://en.wikipedia.org/wiki/Altiero_Spinelli

Before I look into Dr Abs’ biography or background let us look at what this WEF document http://www3.weforum.org/docs/WEF_First40Years_Book_2010.pdf says about Dr Schwab’s background. “Born in Ravensburg, Germany, in 1938, Schwab grew up during in the tumultuous post-World War II reconstruction period in Europe. He was heavily involved in efforts to promote reconciliation between German and French youth. His father was the managing director of a Swiss machinery company who led several industries and business associations.”

So now let us look at Dr Abs’ and who he was. According to Adam Lebor in his great book about the Bank for International Settlements or BIS entitled Tower of Basel this is what he writes about Dr Abs on pages 153 and 154: ” The members of the Committee (BIS) for Foreign Economic Affairs included Hermann Abs of Deutsche Bank, the most powerful commercial banker in the Third Reich. The dapper, elegant Abs was an old friend of the BIS. He had been sent there by Schacht (Hitler’s Banker) during the 1930s to try and stall demands for repayments of the loans that financed Germany after 1918″. Adam Lebor adds the following about Abs on page 154: “As the head of Deutsche Bank’s foreign department during the war, Abs was the lynchpin of the continent-wide plunder, directing the absorption of Aryanized banks and companies across the Third Reich. During the twelve years of the Third Reich, the bank’s wealth quadrupled. Abs sat on the board of dozens of companies, including, naturally, IG Farben.”

One would have expected Dr Hermann Josef Abs would have been found guilty of war crimes and maybe imprisoned or even hung at Nuremberg but even back then bankers seem to have been above the law. Here is what Tower of Basel says about Dr Abs’ escape from justice on pages 187 and 188: “Herman Abs, of Deutsche Bank, was the most powerful commercial banker in the Third Reich, and he was not on Dulles’s A list. Rather he was high on an Allied blacklist of important Nazi officials to be arrested. In the American zone Colonel Bernard Bernstein, the Head of the Finance division, had Abs, indeed all the Nazi financiers in his sights. Bernstein ordered that every banker and industrialist be detained as a suspected criminal.

Adam Lebor continues: “Luckily for Abs, he was living in the British zone. There he met his old friend, Charles Guston of the Bank of England, whom he used to see in Basel during the 1930s at BIS meetings. Gunston had no interest in the Nazi atrocities. All he cared about was getting the banks working again. Gunston asked Abs to help rebuild the banking system in the British zone. Abs was more than happy to oblige. Bernstein was enraged and demanded that Abs be extradited to the American zone. Gunston refused, but in early January 1946, he returned to England. Abs was then finally arrested as a suspected war criminal, and he spent three months in prison before being released and was never charged. Instead, Abs went to work, fulfilling his promise to his old friend Charles Gunston.” (https://en.wikipedia.org/wiki/Hermann_Josef_Abs)

The interesting point about Dr Schwab’s background as seen above is that his father was a German industrialist and we know that Dr Abs was the most influential or important commercial banker in the Third Reich and when he was Chairman of the European Management Forum ( the predecessor of the World Economic Forum) he was 70 years old while Dr Schwab was in his early thirties. Is it possible that Dr Abs was an old friend of the Schwab family? I guess some more research about Schwab’s father is required but I think it is more than enough to connect the World Economic Forum with the Third Reich seeing that the most powerful and influential commercial banker during the Third Reich was the Chairman of the EMF in 1972.

I have noticed that the World Economic Forum, which markets itself as an innocent NGO or Non-Governmental Organization has a very big presence on Facebook and pushes its Fourth Industrial revolution agenda on that social media platform with almost 8.5 million followers. So next time you see a posting on Facebook from the WEF just remember who were the people behind the formation of this NGO.