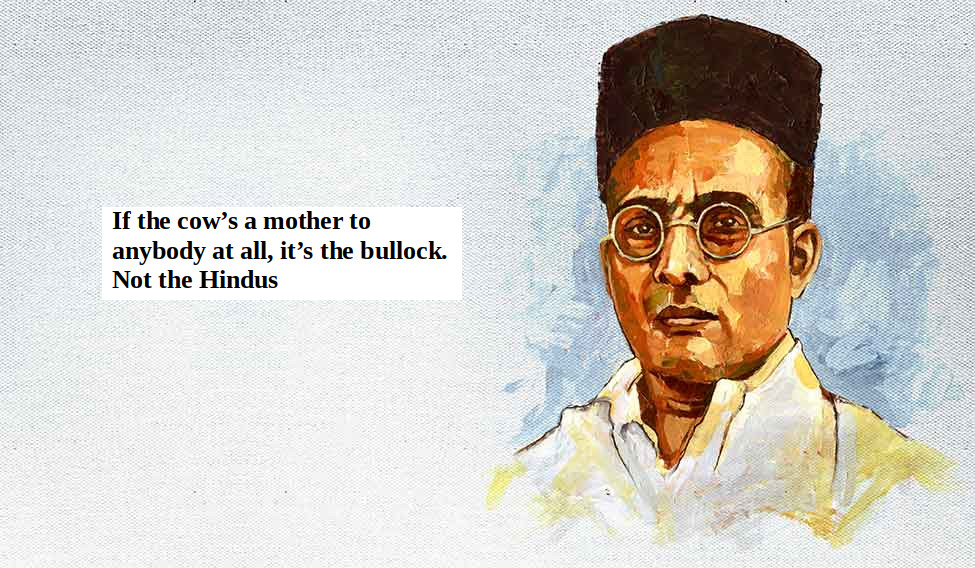 Here’s a summary of Savarkar’s views from savarkar.org, maintained by hardline supporters of his ideology.

A: “The qualities of god permeate into his worshipper”

B: “If we are to now found our nation on the basis of an animal, let that animal be the lion.”

It seems self-evident to us that Savarkar would not have objected to the consumption of meat Hindutva grounds, but that he might have objected for economic reasons.

It is therefore natural to observe that Savarkar appears to have favoured the culling old and infirm cattle.

The cow should not be the emblem of the Hindu nation

“The cow is but a milch symbol of the Hindu nation. By no means should it be considered its emblem (*Savarkar’s exact words are: gaay hi hindurashtraachaa ek dugdhabindu! Maanbindu navhech navhe!). The object of worship should be greater than its worshipper. Likewise, a national emblem should evoke the nation’s exemplary valour, brilliance, aspirations and make its people superhumans! The cow exploited and eaten at will, is an appropriate symbol of our present-day weakness. But at least the Hindu nation of tomorrow should not have such a pitiable symbol. (1936, Ksha kirane or X rays, Samagra Savarkar vangmaya, Vol. 3, p.237)

The symbol of Hindutva is not the cow but the man-lion (*Nrsinha or Narsimha is considered the fourth incarnation of Lord Vishnu. He was half-man, half-lion).

The qualities of god permeate into his worshipper. Whilst considering the cow to be divine and worshipping her, the entire Hindu nation became docile like the cow. It started eating grass. If we are to now found our nation on the basis of an animal, let that animal be the lion. Using its sharp claws in one leap, the lion fatally knocks and wounds the heads of wild mammoths. We need to worship such a Nrsinha. That and not the cow’s hooves, is the mark of Hindutva. (1935, Ksha kirane or X rays, Samagra Savarkar vangmaya, Vol. 3, p.167)

Animals such as the cow and buffalo and trees such as banyan and peepal are useful to man, hence we are fond of them; to that extent we might even consider them worthy of worship; their protection, sustenance and well-being is our duty, in that sense alone it is also our dharma! Does it not follow then that when under certain circumstances, that animal or tree becomes a source of trouble to mankind, it ceases to be worthy of sustenance or protection and as such its destruction is in humanitarian or national interests and becomes a human or national dharma? (Samaj Chitre or portraits of society, Samagra Savarkar vangmaya, Vol. 2, p.678)

…When humanitarian interests are not served and in fact harmed by the cow and when humanism is shamed, self-defeating extreme cow protection should be rejected…(Samagra Savarkar vangmaya, Vol. 3, p.341)

…A substance is edible to the extent that it is beneficial to man. Attributing religious qualities to it gives it a godly status. Such a superstitious mindset destroys the nation’s intellect. (1935, Savarkaranchya goshti or tales of Savarkar, Samagra Savarkar vangmaya, Vol. 2, p.559)

…Without spreading religious superstition, let the movement for cow protection be based and popularized on clear-cut and experimental economic and scientific principles. Then alone shall we achieve genuine cow protection like the Americans. (1934, Samagra Savarkar vangmaya, Vol. 3, p.171)

…The religious character that Hindus have given to cow protection howsoever naïve is not symptomatic of cruelty. This is because protecting animals such as cows and buffaloes that are extremely useful to man have an objective of safeguarding human interests. But the religious fanaticism of those non-Hindus whose religion itself is based on hatred for the cow is not only naïve but also cruel. They have no right whatsoever to mock at the Hindus.

There is an overdose of gratitude, compassion, notion of all living beings being one in the cow worship of Hindus. But the cow slaughter indulged in by non-Hindus has an excess of cruelty, ungratefulness and demonic (asuric) taking of life. It is not religious madness but irreligious wickedness. For this reason, these non-Hindus should discard their ‘religious’ cow hatred and consider cow protection done for economic reasons to be their duty. (1935, Ksha kirane or X rays, Samagra Savarkar vangmaya, Vol. 3, p.171-172)