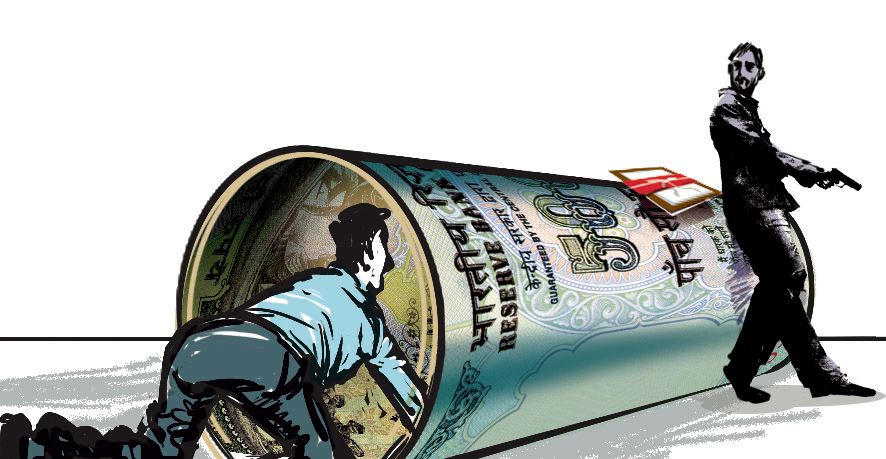 From @screwedbystate , presented without comment.. for readers familiar to twitter please read the original thread with references here.

Abolition of GST would be an instant and big stimulus. But Fakeer’s greed is too great. It’s actually rather easy to have a decent economy – all that’s needed is to dial down govt greed for money and control of human activities.

But most govts aren’t capable of restrain. The psychotic mania for surveillance and to have a record of every transaction is on the rise. Just as I predicted when the deranged media mob was screaming for government to do something drastic about “black money” – nothing good will come out of it, plenty bad will. And it has. Millions of livelihoods have been screwed in the madness.

All the famous media screaming heads and high-falutin pundits were wrong and @screwedbystate was right. And yet they go on in their highly paid gigs and I tweet in my cheap Chinese PJs wondering how to pay the next bill. I warned you people, but you wouldn’t listen to me. You were all eager to join the mob to tear apart blackmoneywallahs, not realizing that you too would become a permanent victim *even if* you had not a paisa in black.

So you see, it’s wiser to pay attention to what @screwedbystate says and not dismiss it as foolish rantings. You keep losing your freedoms, wealth and peace of mind because you believe the self-serving shit of your oppressors instead. Once again, there’s NO “black money” problem, no tax evasion problem. Zero, nada, zilch.

Problem to who? Not to you and me, but only to the greedy parasites of power.

Don’t fall for their propaganda nor of their witch-doctors. THINK for YOURSELF. A couple of tweets in this thread may give a sniff of airs of superiority, I apologize if that is the impression you got. It’s just that I find it rather frustrating how easily so many folks fall for the propaganda of the looting elites when it’s so easy to see through it. “Government should do something about black money!” -you all cried in unison.

See the result. Pathetic thing is you still haven’t learnt.

Isn’t it curious-why should an anti-corruption movement make business harder instead of easier?

That’s the result of inverted morality where corruption-crimes of state looters-are equated with self-defense by their victims. You are not blameless, people.

Sorry to keep saying I told you so but you all screamed for it, so I’ll keep telling you.

After all this mayhem that’s destroying lives and livelihoods you should have got that what matters is to expand freedom not to find “black money”.

But have you? People-now that your economy is screwed by a greedy government, millions of livelihoods destroyed, businessmen jumping off bridge-do you get the horrific consequences of the looters’ war on so-called black money?

NOW will you oppose it instead of cheering it as you did? NOW will you get it that war on “black money” is a war on your freedom and well-being, all to fill the bottomless pit of your overlords’ greed, overlords who give not a shit how many serfs die or get screwed in their cruel measures for greater pillage? NOW will you stop cheering your own enslavement and your own destruction?

I’d like to think so, but I don’t harbor too much hope.

Instead of going after “black money” by becoming a police state, one oughta become a tax haven and a trade heaven -“black money” from around the world will then go after you in tons and tons.

But rulers are too stupid and evil to have such wisdom.